LEIGH GRIFFITHS is eager to sign a new deal at Celtic – and hopes to score 200 goals before he leaves the Hoops.

The 27-year-old hitman claimed his magical ton with the first goal in the 3-0 win over FK Suduva last Thursday as he helped push Brendan Rodgers’ side towards the Europa League group stages.

Griffiths asked: “Why would you want to leave a club like Celtic? You are playing in-front of 60,000 fans, winning trophies every season.

“Not many players can say they have played for Celtic. I am in an elite group now having scored over 100 goals and I want to extend that to try and get to 200 now.

“Once the contract gets over the line, that’s my next target.” 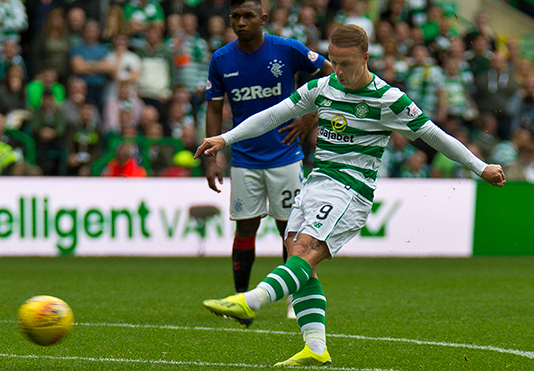 STRIKING POWER…Leigh Griffiths powers in a free-kick against Sevco.

Griffiths claimed: “The manager, Brendan Rodgers, knows what I can do, he doesn’t want me to leave the club.

“He always want me around and that’s a compliment in itself. Whether I get picked or not, I know he knows what I can do and that’s put the ball in the back of the net.

“The manager will chop and change his frontline, so it’s me and Odsonne vying for that one place.

“Hopefully, as the season progresses, we can form a formidable partnership.”