Celtic Quick News on News Now
You are at:Home»Latest News»GRIFFITHS: POTM FOR AUGUST
By CQN Magazine on 15th September 2015 Latest News
STAND-OUT Celtic striker Leigh Griffiths has been rewarded for his excellent form by winning the Scottish Premiership Player of the Month award for August.
The livewire Hoops forward scored six goals in seven SPFL games during the month. 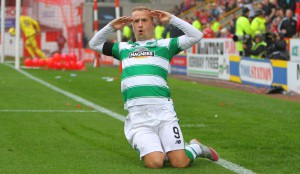 The division’s top scorer has nine strikes to his name, having also netted in Celtic’s Champions League qualifiers against Stjarnan and two against Malmo.

Griffiths, who fired in 20 goals last season, has picked up where he left off this year, with his most recent strike coming in the weekend’s defeat to Aberdeen.

The 25-year old was the last player to win the award. He took the title in April after scoring seven goals in five league games, including two hat-tricks.

He has become Ronny Deila’s main frontman after seeing off the challenge of £1.3million Nadir Ciftci, the summer signing from Dundee United who has yet to open his goal account.
Deila could also afford to offload struggling Serbian Stefan Scepovic on a season-long loan to Spanish outfit Getafe such has been the consistency and reliability of Griffiths.
Click Here for Comments >
Share. Twitter Facebook Google+ Pinterest LinkedIn Tumblr Email
Previous Article‘ABERDEEN? WHAT’S ALL THE FUSS ABOUT?’ KENNEDY
Next Article A LOOK AROUND PARADISE