LEIGH GRIFFITHS has told Bayern Munch to beware when they face Celtic at Parkhead on Tuesday night.

The Hoops were walloped 3-0 by the German outfit in their Champions League Group B encounter at the Allianz Arena earlier this month.

Griffiths scored in the 1-1 Premiership draw against Kilmarnock yesterday which equalled the club’s 62-game unbeaten domestic run which dated back to Willie Maley’s Celtic side of 1917. 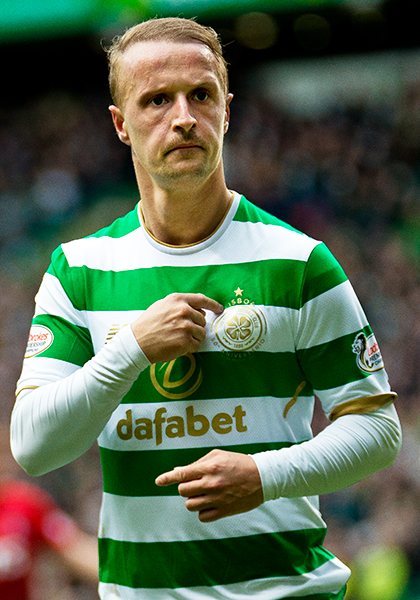 Now the 27-year-old striker has turned his attention to the visit of the Bavarian giants and said: “I think the game will be different here, especially with the crowd getting behind us. They will roar us on from start to finish.

“You’ve seen the second-half in Munich when we were much more disciplined to go and play and create good opportunities.

“If we can replicate that last half-hour, then we will give ourselves a chance.

“It is going to be a difficult night for us but as you have seen previously, big teams have been turned over when they came here.”

Brendan Rodgers now has a selection poser as he ponders who will lead the attack against Bayern.

Griffiths started against Killie and was joined by Moussa Dembele in the 72nd minute as the Hoops pressed for the winner.

The Scotland international added: “As a striker, you want to score goals and play well.

“Moussa came back and is fit, he had to wait for his chance and he took it with aplomb.

“So, I was back in and scored a goal and we need to see what happens on Tuesday.

“You know how good a player Moussa is. I am a striker, I want to be selfish and in the team, but ultimately it is down to the manager and who he sees fit to start the game.

“Whether it is me or Moussa, we will give 100 per cent. It is all about the team, not individuals.”
Brendan Rodgers – The Road to Paradise is on sale now at www.cqnbookstore.com the first 100 copies sold will all arrive with a free gift included!