LEIGH GRIFFITHS has three games to prove he is worth a £1million extension to his Celtic contract.

The Hoops striker has scored a meagre eight goals in a massively disappointing campaign and he is sweating on his future with the club yet to make a decision on activating a 12-month option on his deal, as CQN reported earlier this month.

The Parkhead side have a trio of encounters to face – against Steven Gerrard’s side, St Johnstone and Hibs – before the curtain comes down on a disastrous term.

As expected, there will be no decision made on Griffiths’ future until Neil Lennon’s successor is put in place.

The Scotland international frontman, who will be 31 in August, has been a peripheral figure after a fall-out with his former gaffer in the summer when he was dropped from the squad for the four-game pre-season schedule in France.

Lennon was far from satisfied with the player’s condition after a four-month lockdown period. 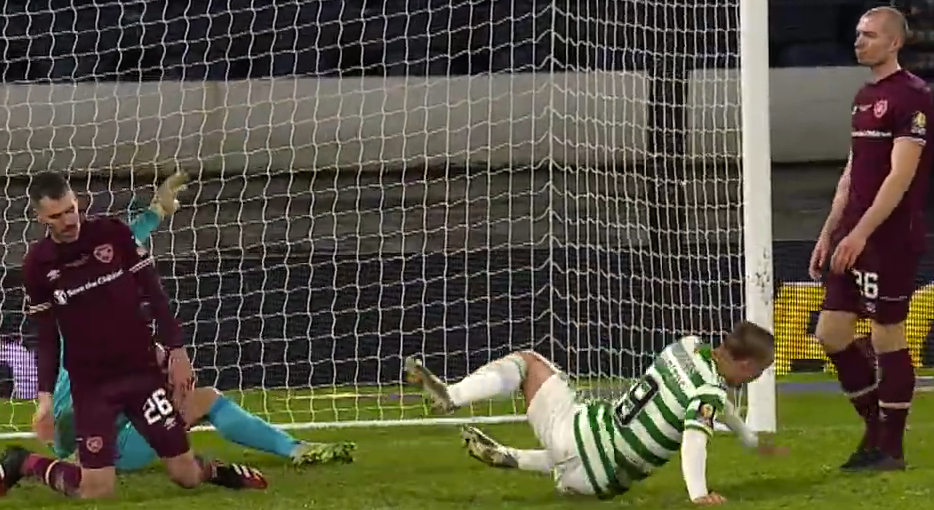 FINAL SAY…Leigh Griffiths strikes for the third goal in the dramatic 3-3 extra-time draw with Hearts in the 2020 Scottish Cup encounter in December last year.

Griffiths has struggled to make an impact – in fact, he has failed to make much of an impression over the past three years – but he demonstrated glimpses of his penalty-box predatory instincts with the third goal in the 3-3 draw in the Scottish Cup Final stalemate with Hearts in December which led to the penalty-kick shoot-out victory to seal the phenomenal quadruple treble.

And he netted the stoppage-time equaliser against Aberdeen at Pittodrie last week after coming on as a late substitute for Odsonne Edouard.

The Frenchman will be on his way in the summer, Patryk Klimala has already made a £3.5million switch to New York Red Bulls and £5million Albian Ajeti is proving to be an expensive misfit.

Those circumstances could earn a revigorated Griffiths a new deal which is worth £1million to the player.

Eddie Howe remains the favourite to land the manager’s job on a permanent basis with talks ongoing with the former Bournemouth boss.

Griffiths has been linked with a return to Hibs, but the opportunity of good performances at Ibrox on Sunday, St Johnstone at Parkhead on Wednesday May 12 and Hibs at Easter Road three days later may persuade the new gaffer to trigger the option.