LEIGH GRIFFITHS is hoping he gets the green light from Neil Lennon to team up with Odsonne Edouard for the crucial games ahead as Celtic remain focused on the historic 10 in a row.

The champions are in the unusual position of playing catch-up at the moment after a stuttering spell in the league that saw them ship careless points.

However, they sparked in the 3-0 victory over Hamilton Accies at New Douglas Park in dreadful conditions with the rain driving down throughout and the wind swirling around the low-level ground.

The encounter was a potential banana skin, but, after a frustrating goalless first-half, Odsonne Edouard lashed in a penalty-kick shortly after the urnaround and Griffiths combined with the Frenchman before rifling in the second. It was done and dusted by the time David Turnbull prodded in the third after a header from Edouard had rebounded from the upright.

Dundee United bring down the curtain on a fluctuating 2020 at Parkhead on Wednesday before Lennon takes his troops to Ibrox to lock horns with Steven Gerrard’s outfit on Saturday to kick-start a brand new year.

Griffiths is eager to continue his partnership with Edouard, a prolific double-act that helped fire the Hoops to their ninth successive crown last season. 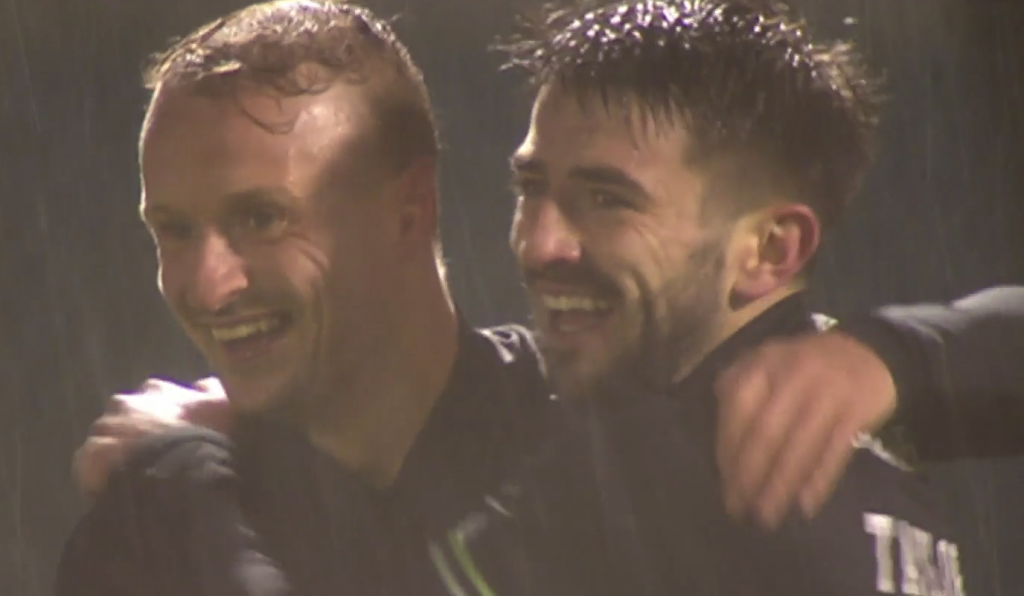 JOY BHOYS…Leigh Griffiths and Greg Taylor celebrate the striker’s goal to make it 2-0.

The 30-year-old Scotland international, speaking to the Sunday Mail, said: “We’ve not had that many opportunities so far and, hopefully, we can build on it again.

“Odsonne hasn’t been playing his football of late, but you saw how good he was on this occasion. His link-up, his hold up play and running off the ball was brilliant.

“Hopefully, that’s him turned a corner and we can get him all firing again. Let’s hope we can put a run together now.

“We’ve played well together the last two games and, hopefully, we’ll get the chance again on Wednesday to prove we deserve to be up there.

“I like to go in behind and he likes to come short to feet. It stretches defenders when they don’t know whether to stay with him or drop off, where he’ll get at people and get turned.

“I like to play on the shoulder and follow stuff in, so we complement each other well. With runners such as Ryan Christie, David Turnbull and Callum McGregor behind us, we’re an attacking side and we want to go and exploit that.”

Griffiths added: “The more I get on the pitch, the fitter I’m going to become.

“The gaffer knows what I can do, it’s just about trying to get that consistency going again, especially the linking-up with Odsonne. You saw how good it was at the back end of last season and, hopefully, we can try to rediscover that now.

“The performances are coming together now. We look more assured and we can take that forward.”