Celtic Quick News on News Now
You are at:Home»Match Report»HAIL! HAIL! THE CELTIC HISTORY-MAKERS
By CQN Magazine on 19th May 2018 Match Report

A SPECIAL team has now taken its special place in the history of Scottish football.

Celtic overcame the rugged challenge from Well this afternoon to pick up their sixth successive piece of silverware, a feat unprecedented in our game.

The double treble was duly delivered by Brendan Rodgers in front of their legion of adoring fans at Hampden and once again the feat was achieved by spirited team work, nothing less that 100 per cent effort and genuine ability.

Those qualities – and the expert, practically flawless guidance from the manager since May 2016 – has brought a cavalcade of trophies to the east end of Glasgow.

And also earned the applause of neutrals throughout the sporting world, triumphs etched in skill and splendour, victories achieved in the proper manner.

The brilliant first-half strikes from Callum McGregor and Olivier Ntcham brought down the curtain on another spectacularly successful season for Celtic. 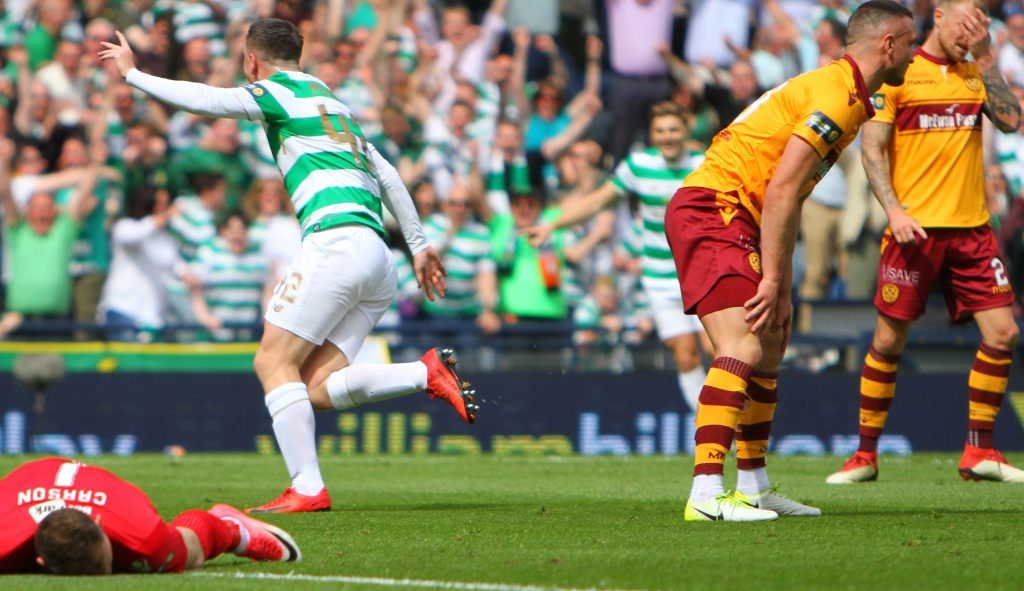 GOAL! Callum McGregor turns away after his whizzbang drive zipped past the helpless and grounded Motherwell keeper Trevor Carson.

The Hoops started at full throttle and emphasised they meant business straight from the kick-off.

James Forrest instigated a breathtaking burst from defence into attack with a surge across the halfway line before slipping a pass in front of Scott Brown who attempted to pick out the lurking Moussa Dembele in the penalty box. A last-ditch intervention from Carl McHugh denied the French striker an early goal.

Sixty seconds later, McGregor collected the rebound from his right-wing corner-kick and clipped a pass to Tom Rogic, who was clearly in the mood.

The Aussie took a touch before drilling in a 25-yarder, but it swept wide of Trevor Carson’s left-hand post as the keeper threw himself full-length across his line.

The early moments were settling down as expected with the Well robust double-act of Curtis Main and Ryan Bowman attempting to put the pressure on Kristoffer Ajer and Dedryck Boyata.

Kieran Tierney was rampaging down the left-hand side to the extent he became a marked man – probably literally – by his opponents. 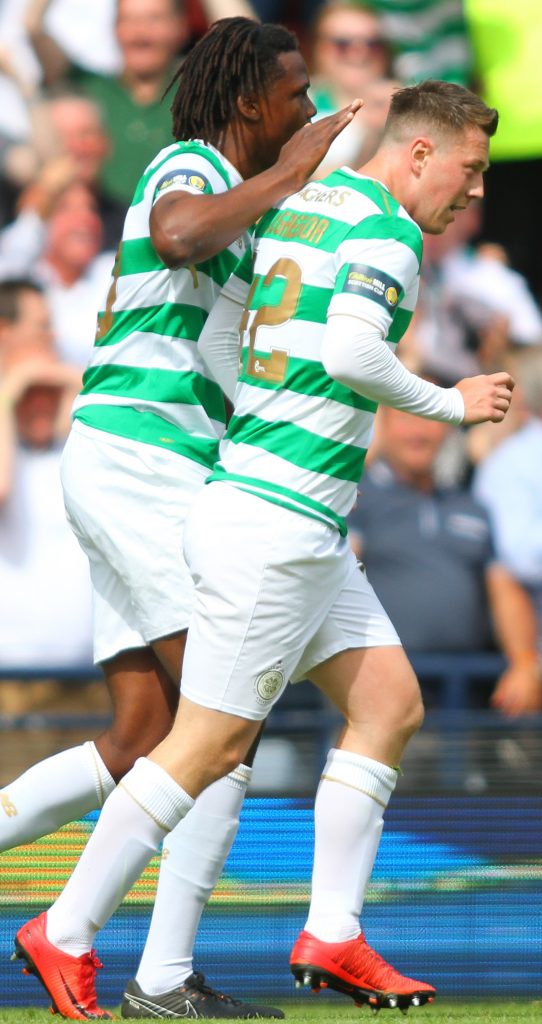 Before half-time, Richard Tait and Liam Grimshaw were booked for clattering challenges on the left-back and Allan Campbell escaped a similar fate after he chopped the player to the ground.

A clearly-upset McGregor remonstrated with the Well defender before referee Kevin Clancy had a word with the players. Campbell could count himself lucky to have escaped a caution.

However, before those deserved bookings, the Parkhead men had netted twice in the first 25 minutes and they were already looking out the green and white ribbons for the Cup.

The first goal in the 11th minute was a thing of beauty from McGregor and was a fitting strike to propel the Hoops towards the history books.

Mikael Lustig knocked a ball into the box that was met by a desperately-diving defender who headed a clearance out of the congested penalty box.

McGregor, though, anticipated the path of the ball and brought it down with his left foot and then thundered a half-volley beyond the helpless Carson in at his right-hand post.

The Celtic supporters exploded into joy as the midfielder took the congratulations from his team-mates. It was a goal that was worthy of a Cup Final setting.

In the 25th minute, Ntcham doubled the Hoops’ advantage with a well-struck effort that again left the Well keeper helpless. Tierney and Rogic combined on the right and Dembele, a physical presence throughout the encounter, touched the ball back to his fellow-Frenchman. 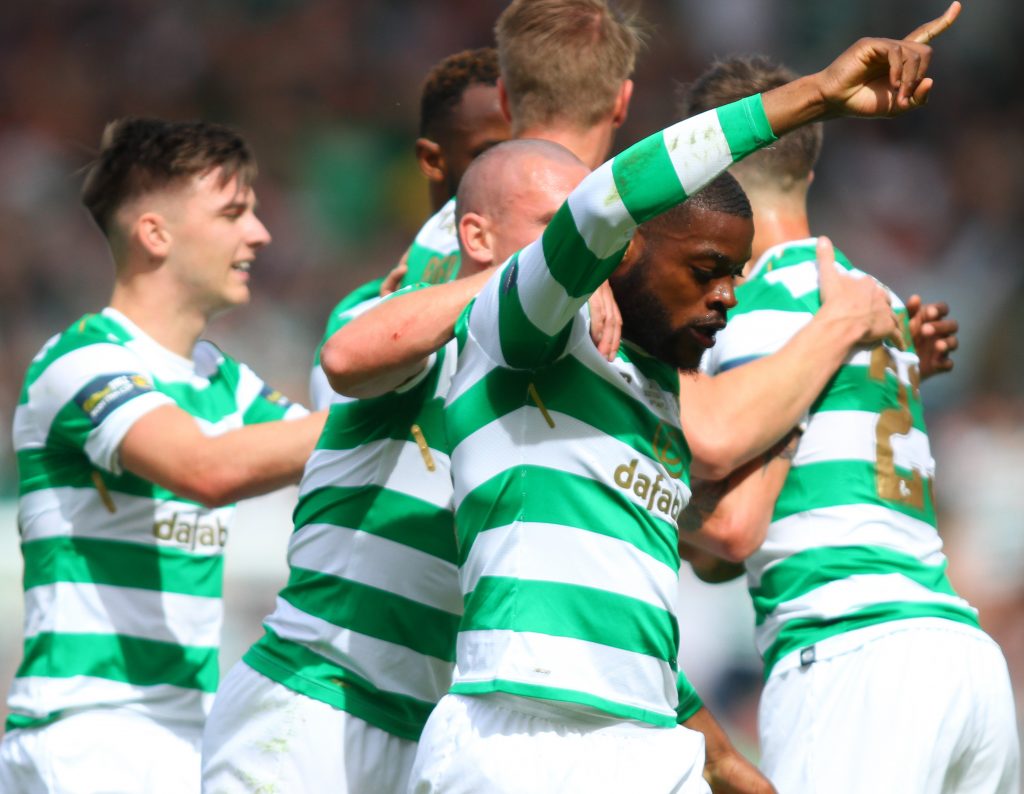 FRENCH FANCY…Olivier Ntcham takes the plaudits from his delighted team-mates after drilling in the second goal to push Celtic towards the history books.

Ntcham took aim and fired a low right-foot drive from outside the box that hurtled beyond Carson and once again the Celtic supporters burst into elation and some of the Well players realised their dream of an upset was disappearing quickly, lost in the midst of the excellence of their opponents.

Craig Gordon, back in goal after an absence of three games, was fielding clearances long which were mainly aimed for Dembele. If it had been Well’s thoughts to crowd around the Hoops defenders and midfielders in a high press, suddenly they were hit by the realisation they better look for a Plan B.

Ajer surged out of defence in a lung-bursting 30-yard run and slipped a neat pass to Dembele, but the hitman’s attempts to let the ball run through him were spotted by Tom Aldred who lunged in to clear.

Forrest then set up Rogic who tried to steer the ball almost casually into the corner, but his precision was off in this instance and his effort rolled into the grateful arms of Carson.

Motherwell had hardly disturbed Gordon, but there was a swift glimpse of menace when Main saw a chance, but his wayward effort flew over the bar.

Three minutes after the interval, the same player was a bit more accurate in his finishing when the Fir Park outfit raided down the right, but Gordon reacted splendidly to touch the ball over the crossbar.

Celtic responded almost immediately when McGregor rolled a pass to the ever-willing Tierney, bursting down the left, but Carson saved bravely at the feet of Dembele when the near-post cross arrived.

It looked as though the Hoops would surely get the third goal to kill the game as a contest, but Forrest was wasteful when he screwed a shot well wide with Rogic racing into a great position.

On the hour mark, Bowman escaped a booking following a dangerous studs-up challenge on Lustig that left the Swede rolling in agony on the touchline.

A minute later, Well were extremely fortunate when Aldred got away with a blatant tug on Dembele’s jersey in the penalty area. No wonder the big Frenchman looked more than a shade baffled by Clancy’s decision to let play go on.

Campbell, who got away with an assault on Tierney in the first-half, was eventually shown a yellow card for a foul on Rogic. 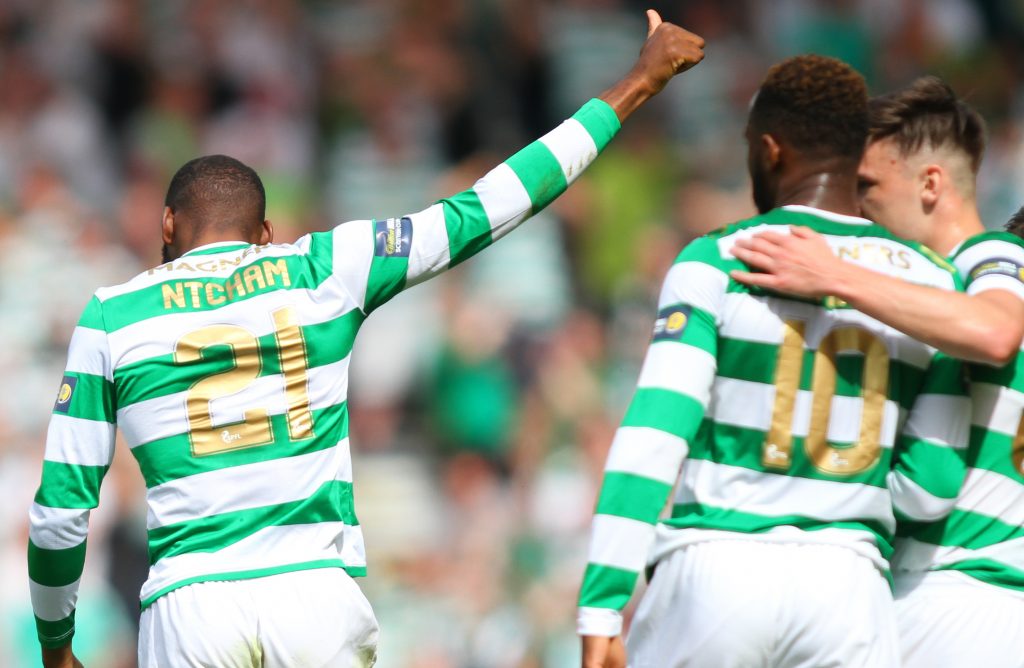 THUMB’S UP…Ntcham accepts the Hampden applause as Moussa Dembele and Kieran Tierney get set to join in. Pics: Geo.

Gordon showed good reflexes to get down to hold on well to a shot from Chris Cadden and then Dembele whipped one just wide of Carson’s right-hand post.

In the 71st minute, Dembele was thwarted by an amazine save from Carson after he had been picked out in the box by an exquisite run and cross from the right by McGregor. His six-yard header looked goalbound until the keeper frantically threw out a left hand and clawed it to safety.

Dembele latched on to the rebound, worked some space for a shot, but was denied again when Carson thrust out a foot to divert his effort for a corner-kick.

Rodgers introduced Stuart Armstrong for Rogic in the 73rd minute and two minutes later Jozo Simunovic came on for Ajer who had taken a fair old battering from Main.

In the 80th minute, Boyata was booked for hauling down Cadden about four yards outside the box and it was Celtic’s turn to breathe a sigh of relief as substitute Gael Bigirimana clattered the resultant free-kick off the junction of bar and post.

But this was always going to be Celtic’s day. Rodgers introduced Scott Sinclair a couple of minutes from the end for Forrest and by that time the Celtic followers were in full flow with their party songs.

There were some outstanding performances from skipper supreme Brown, Ntcham, McGregor, Lustig and Dembele, but Tierney just edged the star man award.