Celtic Quick News on News Now
You are at:Home»Match Report»HAMILTON ACCIES 0 CELTIC 3: GRIFF IS BACK WITH A BANG
By CQN Magazine on 24th November 2018 Match Report

IT TOOK Leigh Griffiths only seven minutes to signal his return to first team action as Celtic strolled to a 3-0 triumph at Hamilton this afternoon.

The livewire frontman, who has been missing in action in recent weeks as he worked on his fitness, was given a hero’s welcome as Brendan Rodgers introduced him as a sub for Odsonne Edouard in the 74th minute.

And Griffiths had the away support in raptures again shortly afterwards when he rocketed in a 20-yard free-kick that zipped low past the helpless Gary Woods. 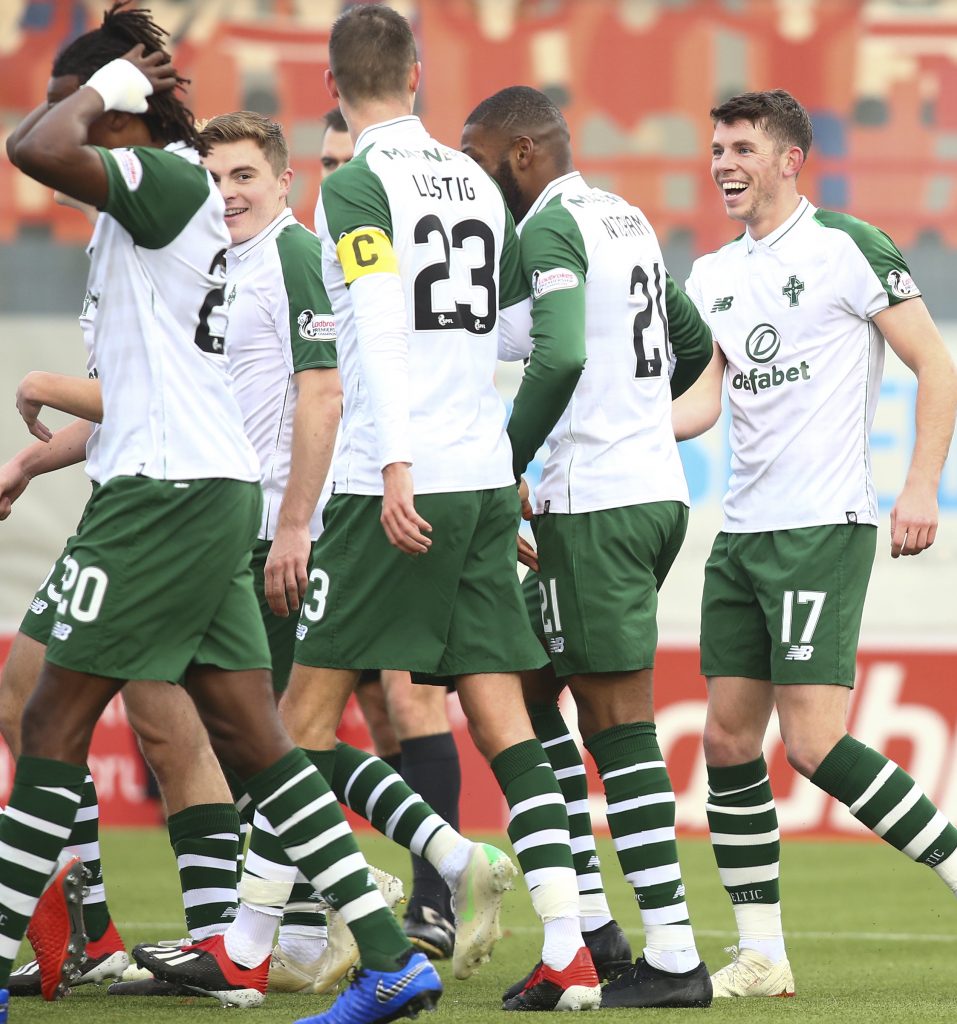 It rounded off a competent and professional performance from the champions as they prepared for their crucial Europa League encounter with Rosenborg in Trondheim on Thursday night.

Boss Rodgers was taking no risks with injuries to key players and he also withdrew Kieran Tierney and James Forrest in the second-half with Emilio Izaguirre and Lewis Morgan joining the action.

The champions have been known to be drastic on plastic and they have shed five points at Rugby Park and Livingston this season, but there was never any chance of a slip against the Accies on their artificial surface.

Celtic ruled proceedings from start to finish and the returning Olivier Ntcham saw a lot of the ball upon his return. Ryan Christie, too, was full of invention and energy and, fittingly, scored the opening goal in the 13th minute. 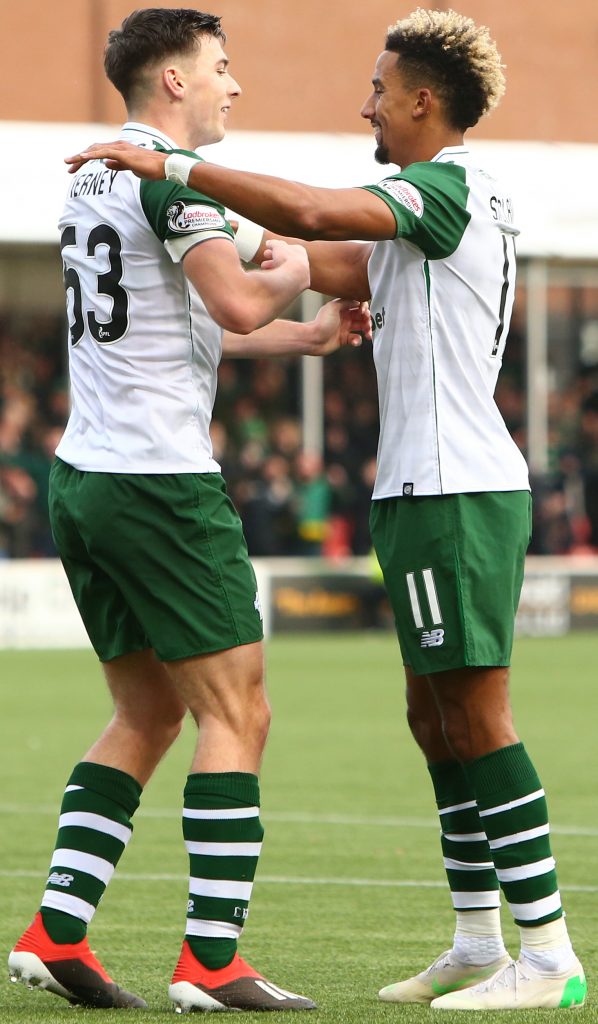 JOY BHOYS…Kieran Tierney and Scott Sinclair are delighted after the second goal.

It was an effort straight from the training ground as Callum McGregor knocked a short corner-kick to Edouard on the left. The Frenchman held onto it until the perfect moment to backheel a pass into the tracks of his team-mate and the inspirational midfielder had a look up before picking out the rampaging Christie.

His fellow-Scotland international didn’t break stride as he hit it on the gallop from 10 yards and his left-foot drive swept high into the net.

Amazingly, despite their possession and overall dominance, it took the visitors until the 68th minute to double their advantage.

On this occasion Mikael Lustig, who was busy throughout, flighted in a diagonal ball from the right and Scott Sinclair sent in a header at an angle.

It took a touch off Scott Martin before wrong-footing Woods and spiralling into the net. The English attacker took the applause and accepted the congratulations, but it will probably go down as an own goal by the stats people.

IN THE GOAL ROUTINE…Leigh Griffiths looks heavenwards after thrashing in the third. Pics: Geo.

There was no doubt about Griffiths’ strike, though, as his left-foot drive flew unerringly past the sprawling keeper and Rodgers joined in the celebrations from the touchline.

There was one puzzling moment exactly one minute and eight seconds into the game when Tierney released Edouard on the left.

He teased and tricked his way towards goal, completely bamboozled Sean Kilgallon and then attempted to send in a low cross. The Accies defender threw himself goalkeeper-style at the ball and stopped it with his left arm.

Referee Don Robertson, in a great position, decided to wave play on and the home side escaped a spot-kick and a certain red card for their player before the game had hardly got underway.

Penalty-kick? Listen, this was a contender for Save of the Season!