CELTIC relied on the old one-two of Odsonne Edouard and Leigh Griffiths to make sure the points weren’t gone with the wind at Hamilton this afternoon.

The double-act, who went into this game with a total of 15 goals in the nine outings together, took the total to 17 with strikes after the interval to break Accies’ stubborn resistance.

David Turnbull also contributed to give the side a deserved win as they remained on the hunt for points with Steven Gerrard’s side winning 1-0 against Hibs at Ibrox earlier in the day.

It was a struggle in the opening half, where Celtic’s driving attacking play was as relentless as the rain at storm-lashed New Douglas Park, but the nearest they got to a breakthrough goal was a header from Griffiths that smacked off the post in the 19th minute.

The Hoops had almost all of the possession as they chased three points right from the off, but the atrocious weather conditions made it difficult for them to get accuracy into much of their passing.

Ryan Christie struggled to pick out team-mates and was guilty of a succession of loose deliveries in a difficult first-half.

Edouard drifted around the periphery and made some eye-catching movements, but, unfortunately, his finishing did not match his dribbling skills in that opening spell. Thankfully that changed after the interval.

The Frenchman drifted past four Accies defenders in the 35th minute and then spoiled the moment with a wretched shot that flew waywardly over the bar when he should have stuck it behind young Kyle Gourlay, making only his second league appearance for the home side.

The keeper made a superb third-minute save when he got down smartly to his right to push away a Griffiths’ effort after a neat one-two with Edouard. And that was largely the story of the first 45 minutes.

There was a moment of respite for Accies when referee Don Robertson awarded them a free-kick in the Hoops half. It was a ludicrous decision by the match official who compounded his error by flashing a yellow card at Nir Bitton who would have to play the remaining 85 minutes with the threat of another booking to end his afternoon.

If Robertson gets the opportunity to watch a rerun of the incident he might note the Israeli did not even make contact with Andrew Winters who stumbled to the ground after losing his balance. 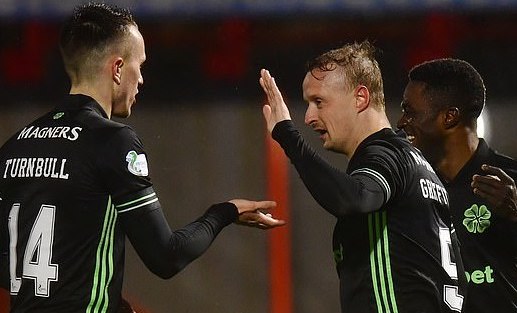 In the eighth minute a 25-yard effort from Christie was deflected over the crossbar and that was followed by two misses from Bitton as he got his head to corner-kick deliveries from Turnbull from both wings. The defender climbed well on both occasions and also twice missed the target.

Jeremie Frimpong was creating havoc on the right with his dynamic running and it was the Dutch ace who set up Griffiths in the 19th minute with the first-half’s best opportunity.

His searching ball to the back post found the strikers coming in at pace and it looked as though he must score, but his header clattered off the keeper’s right-hand upright and bounced to safety.

There three minutes added on in the first-half for a nose injury to Accies’ David Moyo and Edouard blew the ideal chance to get the opening strike.

Turnbull smashed in a low ball from the left and the Frenchman nudged the ball from smack in front of goal straight into the arms of the grateful Gourlay who could hardly believe his luck.

However, that changed only three minutes after the turnaround when Edouard was decked by Aaron Martin after a superb piece of play from McGregor and Frimpong to set up the marksman. The Accies defender lunged in and down went the Frenchman.

A clear penalty-kick and, unlike last week in he Scottish Cup Final against Hearts when he elected to go the Panenka route, Edouard walloped this award past the helpless Gourlay at his left.

In the 54th minute, it was Griffiths’ turn to get on the scoresheet and once again McGregor, a stand-out as a stand-in skipper, and Frimpong who were involved before the ball dropped at the feet of Edouard.

The quick-thinking forward back-heeled the ball into the path of partner Griffiths and he struck a left-foot drive from the edge of the box that hurtled beyond the keeper.

In the 72nd minute, Lennon withdrew Griffiths and introduced Albian Ajeti, looking for his first Hoops goal since scoring against Hibs in September.

Two minutes later, the Hoops celebrated their third goal after a sweeping movement that saw Edouard send Callum McGregor running clear on the left. His sweet cross into the box was met by the French striker whose header thumped against the keeper’s right-hand post, but the rebound fell perfectly for Turnbull to first-time it into the back of the net from close range.

Mikey Johnston and Patryk Klimala came on for Turnbull and Edouard 12 minutes from time as Lennon freshened up the team for the closing stages.

It took a while for the Hoops to unlock the Accies rearguard, but once Edouard’s penalty-kick smashed into the net there was only going to be one destination for the points.

Now all eyes are on Parkhead and the visit of Dundee United on Wednesday as the curtain comes down on an eventful 2020.