A DEVASTATING three-goals-in-13-minutes salvo fired champions Celtic a magnificent seven points ahead at the the Premiership pinnacle after a comeback victory over gallant 10-man Hamilton Accies this afternoon.

The Hoops went from awesome for half-an-hour against St Johnstone in midweek to awful for over an hour against a rock-bottom side that had played since the 34th minute with a player short following Jamie Hamilton’s red card.

However, it was more perspiration than inspiration from Neil Lennon’s side to grind out the points on this occasion.

Thankfully, they managed a victory after losing a dreadful goal following yet another failure to deal with a routine corner-kick that was nullifed by Odsonne Edouard before half-time.

And it took until the 78th minute for the Hoops to get in front when Chrisopher Jullien scored with a crisp close-range drive before his fellow-countryman Edouard added another.

In the first minute of stoppage time, James Forrest thumped in the fourth. 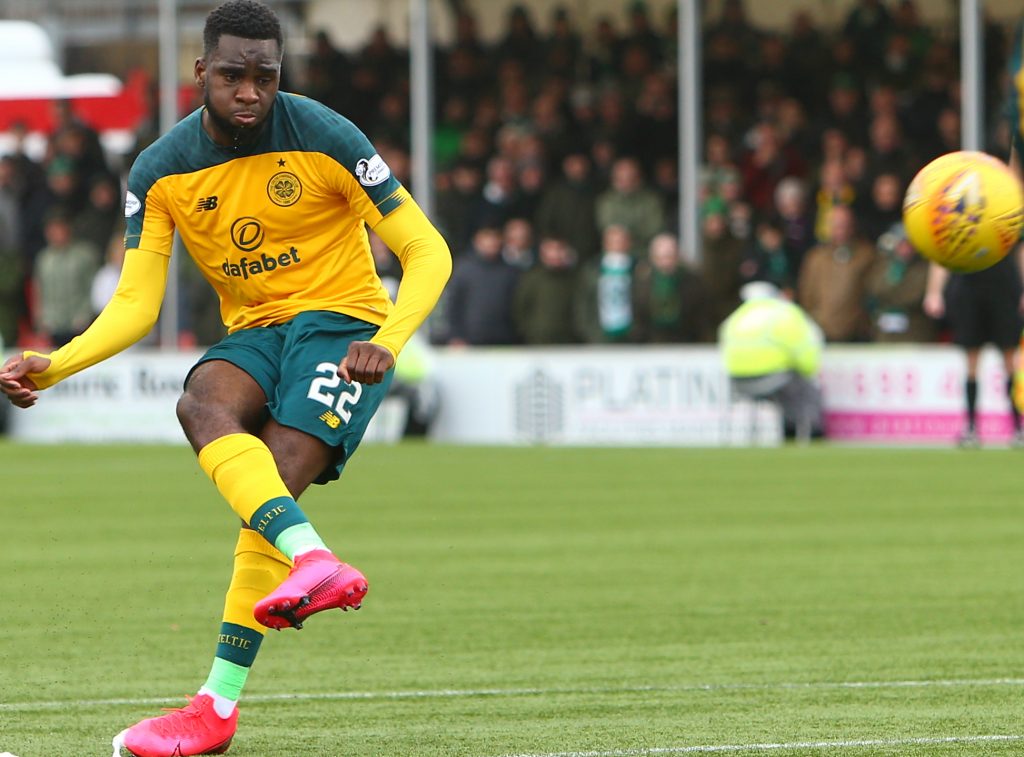 NUMBER ONE…Odsonne Edouard whips in a deadly free-kick for the leveller. 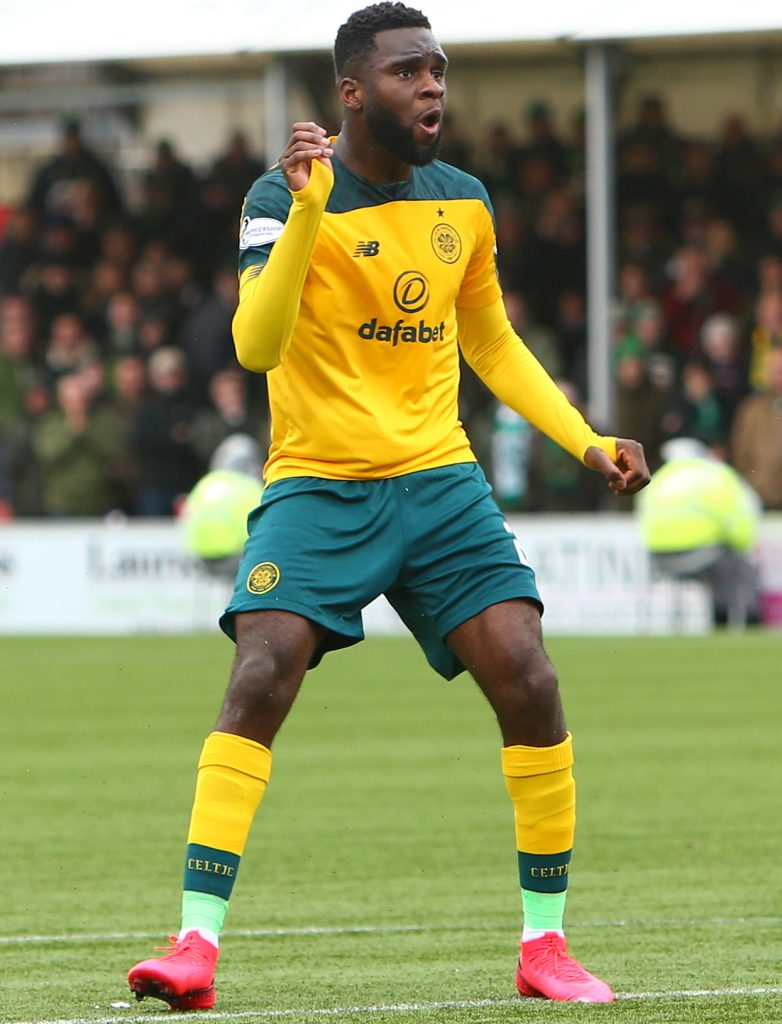 Lennon could not have been satisfied with what he had witnessed in a stop-start first-half where his side conceded yet another goal from a set-play. It’s an alarming deficiency in a defence with a skyscraper keeper in Fraser Forster and towering central defenders in Jullien and Kristoffer Ajer.

Neither of the centre-backs looked comfortable against Accies’ powerhouse Marios Ogkmpoe who was allowed a free header from a left-wing corner-kick delivery in the 27th minute to open the scoring.

Jullien allowed the bustling forward to out-muscle him as he raced in to plant a header beyond the static Forster from six yards at the near post.

The Frenchman looked distinctly ill at ease against a journeyman centre-forward who went into this encounter with only two goals to his name all season. The performance brought back unwelcome and disturbing echoes of Lyndon Dykes bossing Jullien and Ajer in the 2-0 flop at Livingston in October.

Accies were physical as they tried to get in the faces of the Celtic players who struggled to get into any sort of rhythm.

There was a double setback for the home battlers in the 34th minute when they had Hamilton red-carded and Edouard equalised with the resultant free-kick.

The Accies defender was dismissed by referee Nick Walsh after hauling Leigh Griffiths to the ground as the striker raced onto a long ball from Jullien. It was deemed a last-man challenge and the match official had no hesitation to banishing the youngster. 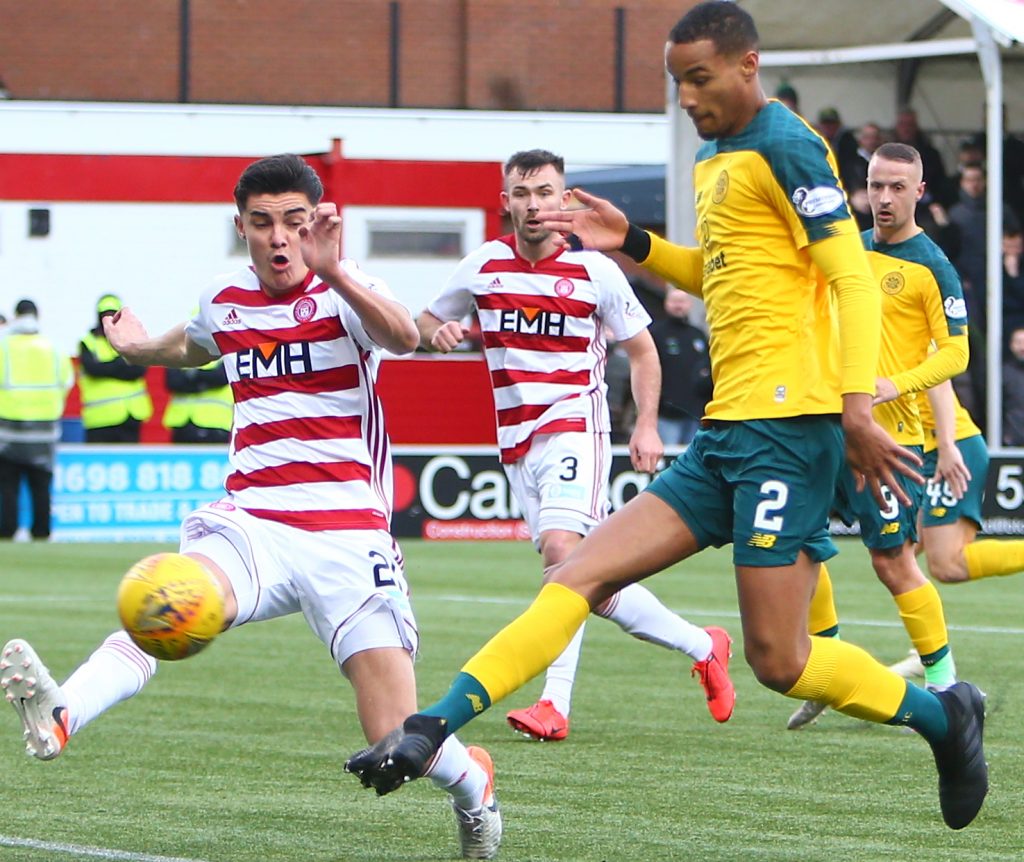 NUMBER TWO…Christopher Jullien sidefoots in from close range to put Celtic ahead.

The free-kick was awarded just outside the box, just about in central position, and Edouard stepped up to hit a cunning right-footed effort that dipped on its way high past the leaping Luke Southwood. Remarkably, it was the Hoops’ first shot on target.

Stephen Welsh, making his debut at right-back, looked to be settling in well and the youngster had to be commended for a last-ditch clearance to foil an Accies breakaway.

Scott Brown, making his 700th club appearance, tried to galvanise his midfield mates, but Olivier Ntcham couldn’t find his range in the opening 45 minutes. Too many passes went astray as Griffiths and Edouard looked for better service.

At one stage, Greg Taylor looked a bit exasperated at the lack of movement up front as he looked up to make a pass.

Two minutes after the turnaround, Griffiths blew the chance of another goal on the comeback trail as he blazed over the crossbar from 10 yards after a superb run and cross from Forrest. It looked a gilt-edged opportunity, but the striker’s right-foot effort swept waywardly over the bar.

There were two quickfire penalty shouts from hand ball incidents as efforts from Ntcham and Taylor were charged down by frantic defenders, but the ref called it right on both occasions and waved play on.

In the 53rd minute, Jullien was left floundering when Ogkmpoe tricked him on the left, but his cross flew across the goal. Somehow the Celtic defender was making the lumbering Accies frontman look like Cristiano Ronaldo.

Scott Martin escaped a booking in the 56th minute when he tugged back Griffiths and the Scotland international almost made the strugglers pay a heavy price from the resultant free-kick.

He clipped in a clever left-foot attempt that looked to be soaring towards the top corner of the net, but the keeper managed to get a fingertip to the ball to divert it onto the face of the crossbar.

In the 62nd minute, Ryan Christie made a welcome return for his first taste of action in 2020 as he replaced a labouring Ntcham and 10 minutes later Jonny Hayes came on for Taylor who had been booked earlier. 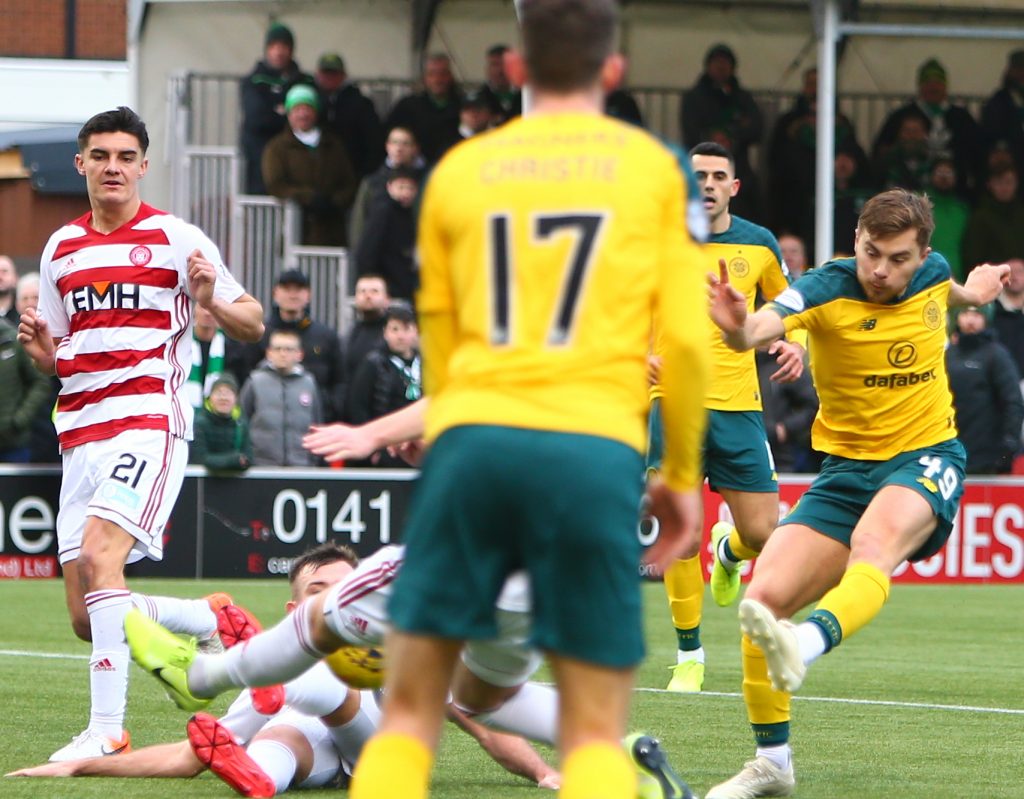 A few moments afterwards. the impressive Welsh came off with Tom Rogic taking his place.

And the arrival of the Aussie sparked a three-goal salvo from Scotland’s title kings.

In the 78th minute, Hayes and Christie combined on the left wing and the playmaker zipped an inviting low cross into the box. Arriving right on time was Jullien who casually sidefooted a six-yard drive wide of Southwood.

Three minutes later, Hayes, Edouard and Rogic combined in a free-flowing move through the retreating rearguard and the Aussie slipped the prolific hitman through with a perfect pass and the French ace did the rest with a killer right-foot finish low into the net.

Edouard missed an absolute sitter in the 90th minute, but it didn’t prevent him from setting up Forrest for the fourth with another clever pass. The winger took a touch to switch it onto his left foot and then simply blasted an unstopple shot high into the rigging.

Now all eyes are on Motherwell in midweek in the quest for nine in a row.