Celtic Quick News on News Now
You are at:Home»Latest News»HAMPDEN CLASH: WAIT FOR IT, KYOGO
By CQN Magazine on 10th April 2022 Latest News

KYOGO FURUHASHI came within inches of a goalscoring comeback in his first appearance of 2022.

The Japanese international hitman, who missed 17 consecutive games after limping off with a hamstring strain in the 3-1 win over St Johnstone in Perth on Boxing Day, was given the green light to come on as a 74th minute substitute against the same opponents at Parkhead yesterday.

With one of his first touches, he launched a breathtaking long pass straight onto the chest of Daizen Maeda who knocked it down for Liel Abada to thunder in the seventh and final strike of the 7-0 romp in the sunshine in the east end of Glasgow.

Then came Kyogo’s moment to attempt to claim his 17th goal of the campaign when he ran onto a through ball to drive a low effort wide of the clawing fingers of the overworked Zander Clark, but, unfortunately, the effort edged just wide of the far upright. 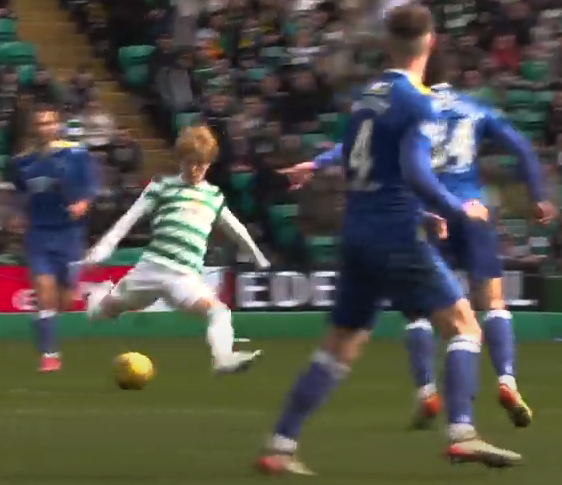 WELCOME BACK, KYOGO…Celtic fans’ favourite Kyogo Furuhashi prepares to launch the long-range pass that led to the final goal in the 7-0 romp over St Johnstone.

It would have capped a fabulous day for the Hoops who stretched their unbeaten domestic record to 33 games with their biggest score of the campaign.

Kyogo, though, is NOT likely to be in at the start of the Scottish Cup semi-final against Giovanni van Bronckhorst’s Ibrox side at Hampden a week today.

Ange Postecoglou resisted the temptation to throw on the club’s talisman when Giorgos Giakoumakis, scorer of the second goal, limped off in the 26th minute with what looked like a hamstring pull.

Instead, the Hoops boss put on Liel Abada, moved Filipe Jota to the left and brought Daizen Maeda inside to lead the attack. Kyogo made his first appearance when he replaced the Portuguese flyer with 16 minutes to go.

Reflecting on the club’s top scorer’s return, Postecoglou said: “I’m pleased for him because he is a great guy. And a super footballer.

“He was so important for us at the beginning of the year when we really needed somebody to step up.

A LOT TO PONDER…Ange Postecoglou after the 7-0 win over St Johnstone at Parkhead. Image courtesy Celtic TV.

“The whole group has watched him work really hard on his own in rehab, so it was great to get him back out there.

“He looked like the quality player he is and he is going to be super important for us.

“I wouldn’t think we will be throwing him in next week. I doubt he’ll start next week.

“But if we can get him some more game time in the next couple of weeks you would think he would be ready to go the last three or four games.”

Postecoglou was delighted with the performance against the devastated Perth outfit and, speaking to the Sunday Mail, continued: “We were on it from the start. It was a danger game for us because St Johnstone have been on good form and are hard to break down.

“We needed to start well and, like a lot of games, we were on top early, but it was good to see us keep going. 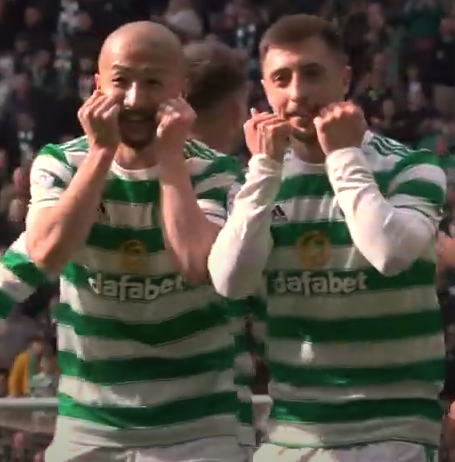 HAPPY DAZE…Daizen Maeda and Josip Juranovic go through the Japanese star’s uunusual goal celebration after his header for the third goal.

“At half-time, we spoke about that because it was a game we could have seen out quite comfortably.

“There’s a couple of things at work there – one is the players, who consistently try to push themselves and we also had some quality coming off the bench which helps to drive things, too.”

Asked if he was confident his team will hold onto their lead, Postecoglou answered: “We don’t have to hold on to anything.

“We are not desperate for anything, we are doing okay.

“We will keep doing what we are doing. We have five games to play and what we keep talking about is that we want to keep playing our best football and try to peak which was always our goal for this time of the year.

“We need to keep our head down, put the accelerator down and if we keep playing as we did on this occasion we will have a good chance.”