ANGE POSTECOGLOU will have to fit in some quality time with his family to celebrate his 56th birthday today in between the Europa League group stages draw and preparing his players for the first Glasgow derby of the season at Ibrox on Sunday.

The manager is still recovering from the rigours of a long 90 minutes and courageous performance from his team as they squeezed past the challenge of AZ Alkmaar in the Netherlands last night on a 3-2 aggregate.

It’s been an absolute whirlwind for the Greek-Australian since he was rubber-stamped as Neil Lennon’s successor 10 weeks ago. 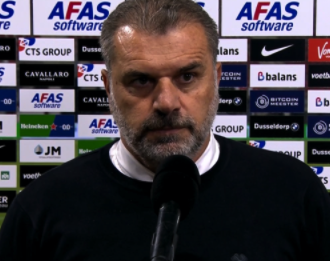 EURO STAR…Ange Postecoglou looks serious as he is interviewed in Alkmaar.

He has now been in charge for 10 competitive games, won six, lost three and drawn one.

Others are poised to follow before the transfer window closes at 11pm on Tuesday night.

Plus he has to deal with the contract situations of Odsonne Edouard and Ryan Christie.

All at CQN wish Big Ange a very happy birthday and hope he gets the time to blow out the candles on his cake.