THE mention of Lubomir Moravcik’s name to anyone of a Celtic persuasion is guaranteed to inspire a smile.

The player arrived as a 33-year-old virtual unknown for a fee around £200,000 from German outfit Duisburg October 1998. There was no fanfare of trumpets to welcome him to the club. However, after two low-key outings in a win over Dundee and a loss against St Johnstone, the veteran hit the headlines big-style in his third game with a sensational two-goal performance as Dr Jo Venglos’ team walloped Rangers 5-1 in the east end of Glasgow on November 21.

And it was against the Govan club that the Slovakian, who celebrates his 57th birthday today, enjoyed another double salvo in the sunshine as the city neighbours were put to the sword in Martin O’Neill’s debut season in 2000/01 when they walked over their opponents on their way to a 3-0 success. It was the Lubo Show that afternoon at the home of the club’s bitterest foes.

The story is told in author Alex Gordon’s fifteenth Celtic book, ’50 Flags Plus One’, as he highlights the Hoops’ untainted title successes.

Here is an CQN EXCLUSIVE and edited extract from Alex’s book of another big season for the Celts – and a big day for Birthday Bhoy Lubo.

THE championship – the thirty-seventh in the club’s history – was delivered on Sunday, April 7 2001 in front of a crowd of 60,440, the biggest in Scotland throughout the season. There were five games still to go when St Mirren turned up in the east end of Glasgow in the forlorn hope of postponing Flag Day and the crowning of new champions. Johan Mjallby and Alan Thompson hit the woodwork, Henrik Larsson proved he was human by fluffing his final effort with just keeper Ludovic Roy to beat and a variety of other efforts flew high and wide. It was left to Tommy Johnson to snatch the glory goal seven minutes from the interval. 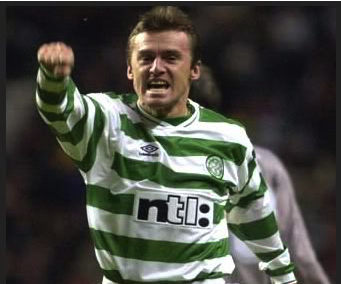 GLASGOW BELONGS TO ME…Lubomir Moravcik celebrates one of his goals in the 5-1 hammering of Rangers.

Martin O’Neill’s side already had the League Cup in the trophy cabinet following Larsson’s hat-trick in the 3-0 romp against Kilmarnock at Hampden on March 18. After the victory over St Mirren, Celtic were one step removed from their first domestic treble since the heady days of the legendary Jock Stein in 1969. Hibs barred their way to the milestone, the Edinburgh side lying in wait after reaching the Scottish Cup Final which would bring down the season’s curtain at the national stadium on May 26. Henrik Larsson fired in a double after Jackie McNamara, an early replacement for the limping Lubo Moravcik, had got the ball rolling to record a successive three-goal Hampden showpiece celebration. 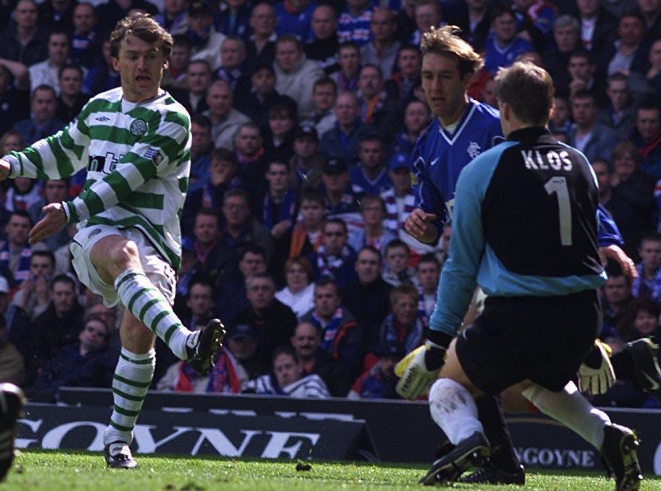 BY THE RIGHT…Lubomir Moravcik slides the ball beyond the stranded Stefan Klos for one his double in the 3-0 romp at Ibrox.

Neil Lennon chipped in: “It’s been unbelievable since I came up here in December. Honestly, I did not expect this to happen. Not at all. I thought I was coming up to join a team to give Rangers a run for their money in the league. We’ve surpassed everything that has been asked of us. I’m now going to take it easy for a few weeks and reflect on this season. Mind you, we have now set ourselves exceptional standards and we’ll just have to do it all again next season.”

A smiling Martin O’Neill concluded: “It’s been an enormous season for everyone and to finish it off today in front of our supporters at a packed Hampden is just sensational. Today is about the players and the supporters. I’m so, so pleased for both sets. The players have had to rouse themselves again for another big occasion, but I never thought there would be a problem because there is no sign of tiredness. Jackie took his goal magnificently and the second from Henrik so soon after half-time settled everything.”

On this occasion, CQN will allow Lubo to have the final say. Seven years ago, he conjured up this marvellous offering:

“My favourite time, my most special time, was at Celtic. They said I was a ‘gift from God’, but it was the opposite – Celtic was a gift from God to me.”