Celtic Quick News on News Now
You are at:Home»Football Matters»‘HAREIDE’S A FUNNY GUY,’ DEILA
By CQN Magazine on 21st August 2015 Football Matters
RONNY DEILA has laughed off Malmo boss Age Hareide’s claim that Celtic players are unfit.
The veteran coach questioned the fitness of the Hoops after his side’s 3-2 Champions League play-off defeat when Jo Inge Berget scored with their last kick of the ball.
But Deila said: “He’s a funny guy. Of course, everybody was disappointed when we conceded the last goal.

“As I can remember we won 3-2. That was a result that we are happy with and we have a good opportunity to go through.”

When asked about comments made by Malmo keeper Johan Wiland that Celtic were “pigs” and had played dirty, Deila responded: “I’ve seen the game one more time, I didn’t see any trouble. It was a fair game.”

Refusing to be drawn into a war of words with Malmo, Deila insisted: “We can’t go down to that level, that’s not Celtic.

“We showed some great football and we are very confident going into these games coming up.

“I’ve seen Mr Hareide very high up and very low down when we’ve been together in Norway, so it’s not anything new from him.

“It seems like they won 3-0, 4-0 when he talks. I can’t see that result. I’ve seen the same in Norway, talking high, but I’ve seen also very low down so that’s up to him.

“I don’t think we seemed tired against Qarabag.

“We have to speak with our legs on the pitch. Now, it’s 3-2 when we go into the second leg. It’s going to be a tough game, but we’re going to be prepared and we want to win that game.

“We are very, very determined now. We have three games left before the national team break.

“We want three victories and if we do that, we have had an unbelievably good pre-season and start of the season.”

Celtic winger Gary Mackay Steven said there was “no substance to the claims” made by Wiland, jokingly adding: “We weren’t any dirtier than usual.”

He added: “What’s at stake is enough to fire us up.”

Meanwhile, Deila said he was unaware of any interest in Leigh Griffiths from Norwich City when asked about the possibility of the striker leaving and former Celtic frontman Gary Hooper coming back to Parkhead from Carrow Road.

He said: “You don’t take away someone who has scored two goals, who we also know will score in every game he plays.

“I think Leigh is happy here and we are very happy with him.”
You can order RONNY’S ROAR The inside story on Ronny’s first season at Celtic from CQN on Amazon by clicking HERE or click on the book cover below. 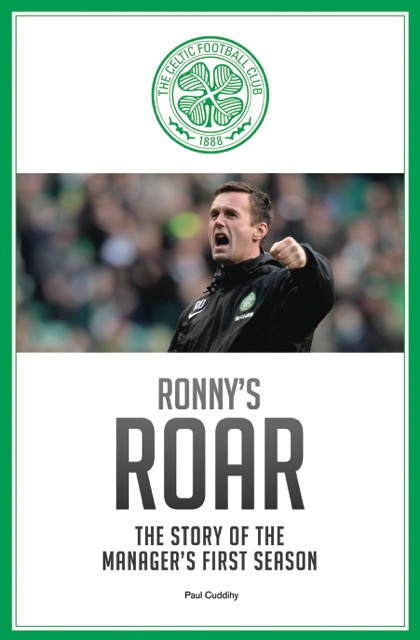