Celtic Quick News on News Now
You are at:Home»Exclusive Series»HARRY HOOD: GREAT UNCAPPED CELTS (Part Seven)
By CQN Magazine on 2nd June 2022 Exclusive Series
CQN is turning the spotlight once again on the Celtic players who never had the honour of playing for their country.
Harry Hood was Jock Stein’s fourth major signing for the club – following Joe McBride, Willie Wallace and Tommy Callaghan – when he arrived from Clyde in 1969.
He became a key player for the Hoops and a fans’ favourite – but was never deemed good enough to get into a Scotland international squad.
Here is Harry’s story in another EXCLUSIVE CQN feature.
HARRY HOOD’S timing in front of goal was impeccable, a master marksman who could ally precision with power when it came to the art of finishing.
However, by his own admission, his timing off the field wasn’t quite of the same remarkable calibre.
The talented attacker joined Celtic in 1969 after his second-time around stint at Clyde with whom he started his career. He was whisked off to Sunderland in 1964, but returned disenchanted with life at the old Roker Park outfit two years later.
Thirty goals from 87 games over a prolific three-year spell with the part-time Shawfielders persuaded Jock Stein to pay £40,000 for his services.
Big Jock had spent £22,000 to arrange the deal of Joe McBride from Motherwell to Parkhead in 1965 and £30,000 a year later to land Willie Wallace from Hearts. He topped that up by £5,000 to bring Tommy Callaghan from Dunfermline in 1968 and, once again, he broke his own transfer record to take Hood to Celtic Park. Jock was never disappointed with his purchase – it was money well spent.
Hood fitted the Hoops identikit immediately; a lively raider who possessed marvellous ball control and an eye for goal. He had a shrewd football brain, too, which allowed him to drop comfortably into midfield positions to operate behind main strikers.
The Parkhead faithful took to him, too. He was already a favourite when he struck a perfect penalty-kick past a flummoxed Rangers keeper Peter McCloy for the winning goal in the Scottish Cup Final replay in 1971. 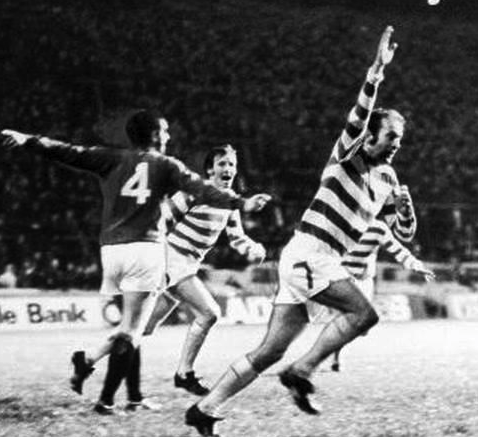 HAMPDEN HOORAYS…Harry Hood races away after scoring one of his memorable hat-trick against Rangers in December 1973.
He also notched a memorable hat-trick against Rangers in the 3-1 in a League Cup semi-final in December 1973 – the first Celtic to claim a hat-trick against the Ibrox side Stevie Chalmers in a 5-1 league triumph in January 1966.
Two years after that, he got the ball rolling with a fine headed goal in the 3-0 victory over Dundee United in another Hampden Final.
Two years later, he had walked away from his beloved Celtic and signed for Motherwell. He was still only 31 at the time, but there is little doubt he missed the influence of Big Jock, badly injured, of course, in the Lockerbie car crash in July 1975 that kept him out of football for a year.
Hood admitted: “I didn’t think Sean Fallon, who took over as caretaker boss, saw me as a first team regular. And I didn’t believe Jock would ever return to be the force he had been before his accident.
“Reserve team football was no use to me at that stage of my career. I asked to leave and I moved to Motherwell. I bitterly regretted that decision.
“Jock, of course, did return and had something to prove. He won the league and Cup double in 1976 which was an incredible feat. Things changed after that season, of course, but it was a remarkable achieve by the manager.”
Hood’s timing on the international scene was equally at odds with his ability on the playing field. He played four times for a Scotland X1 which toured in Asia and Oceania in 1967, once for the Scottish Under-23s a year later and once for the Scottish League in 1970.
Six appearances with two goals at various levels for his country, but no step up to the top side.
But no lesser a football judge than Jock Stein rated him and that was good enough for Harry Hood, who sadly passed away on May 26 2019 at the age of 74.
Click Here for Comments >
Share. Twitter Facebook Google+ Pinterest LinkedIn Tumblr Email
Previous ArticleCeltic is my nation
Next Article A BHOY CALLED JOE (PART SEVEN)