JOE HART admitted it had been “a crazy few days” as he celebrated a win on his Celtic debut.

The 34-year-old former England keeper signed for the Hoops in a £1million switch from Spurs on Tuesday, immediately flew to the Czech Republic to catch up with his new team-mates, had his first training session on Wednesday and made his initial appearance last night in the 4-2 win over Jablonec in the first leg of the Europa League qualifier.

It was a whirlwind three days for the 75 times-capped No.1, but he reckoned it was “worth it”.

Hart is now looking forward to making his first appearance at Parkhead in front of the restricted crowd of 24,500 in the Premiership against Dundee on Sunday – and he has promised Hoops fans the “rust” will soon wear off.

He only played 10 games for the London side last season and failed to figure in a solitary Premier League outing, so there was understandable lack of full match fitness and reflexes, but he couldn’t be blamed for the goals that were conceded after being left exposed on both occasions by a dithering defence. 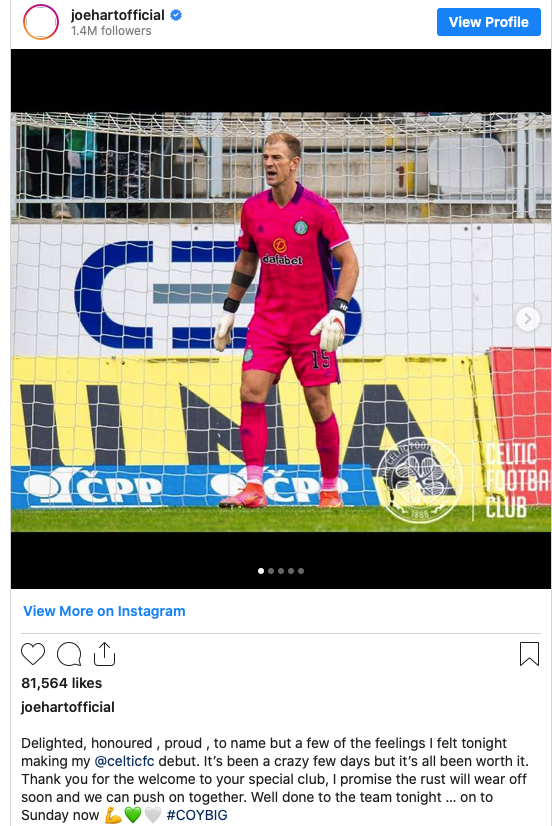 Thankfully, Liel Abada, Kyogo Furihashi, James Forrest and Ryan Christie responded at the other end to give the team a handsome lead going into the return leg at a capacity Parkhead on Thursday with a play-off place against AZ Alkmaar awaiting them.

Posting on Instagram after his debut, he said: “Delighted, honoured, proud, to name but a few of the feelings I felt tonight making my @celticfc debut.

“It’s been a crazy few days but it’s all been worth it.

“Thank you for the welcome to your special club, I promise the rust will wear off soon and we can push on together.

“Well done to the team tonight… on to Sunday now.”