And the former Hoops hero revealed he would have had no hesitation in playing the 30-year-old striker, despite the fact he is not 100 per cent fit.

Griffiths has toiled to make an impact in this campaign after getting off to a false start when Neil Lennon, upset after weight issues following three months of isolation during lockdown, left him at home while he took the rest of the squad on their four-game tour of France.

The forward has claimed a meagre seven goals this term and his lack of game time was typified in the tame scoreless draw against Dundee United at Tannadice that signalled the end of an era. The Hoops were crying out for goals during a sloppy display and the frontman only got the nod to join the action as an 84th minute substitute.

His lack of appearances for the nine-in-a-row champions cost him his place in Steve Clarke’s Scotland World Cup squad with the first tie due against Austria at Hampden a week tomorrow, as CQN reported.

Griffiths held his nerve in his previous international outing when he tucked away one of the crucial penalty-kicks in Serbia to help his nation to the Euro Championship Finals in June with games due against England, Croatia and the Czech Republic. 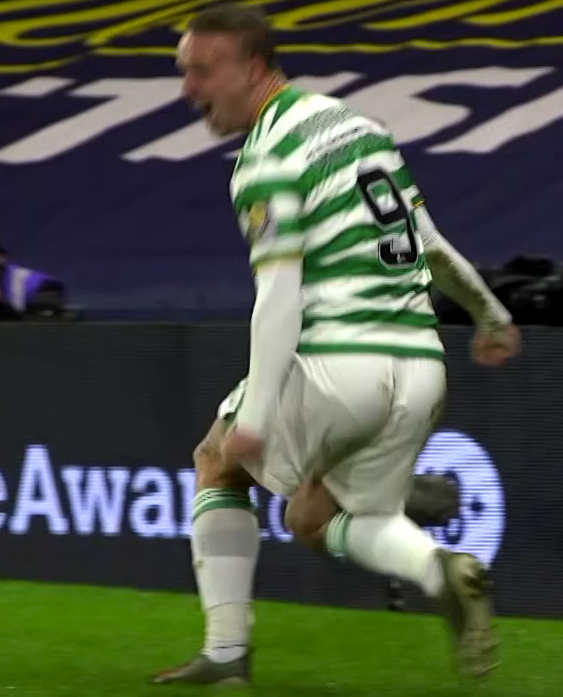 HAMPDEN HERO…Leigh Griffiths celebrates scoring the third goal against Hearts after coming on as a substitute.

Welsh legend Hartson said: “Leigh’s still so deadly in front of goal – but Celtic haven’t been playing him.

“They haven’t given him the opportunities. They’ve seen he’s not quite there in training, maybe his body fat is a little bit over.

“Maybe the sports science department are saying he can’t get around the pitch like he used to.

“But I wasn’t always at my fittest. I always carried a little but extra and Martin O’Neill still played me. He knew when that ball came in, I’d be in amongst the six-yard box, I’d be putting my head in and scoring goals.

“Griffiths is the same. We’re not all the same body types and shapes, but, for me, I would’ve been playing Griffiths.

“His confidence is shot and that’s maybe one of the reasons why Steve Clarke is not including him in the squad.

“But no-one’s really talking about him.”

Hartson, speaking to the Go Radio Football show, added: “Leigh’s had a poor year. Personally, I would have played him at Celtic, I think they’ve missed his goals.

“He’s not at his fittest, but if you want him to score goals, you’ve got to play him every game. I would have done that.”