HATEM ABD ELHAMED is positive Celtic fans will see him it at his best now he is playing Happy Families.

The Israeli right-back, who joined the Hoops in a £1.6million deal from Hapoel Be’er Sheva in the summer, is settling into his new environment.

And his off-the-field life has been enhanced now he had been reunited with his wife Mnar and young son Mohamed.

Elhamed has been without his loved ones after unhesitatingly joining the eight-in-a-row champions two months ago and the 28-year-old defender has been waiting ever since to welcome his family to his new base. 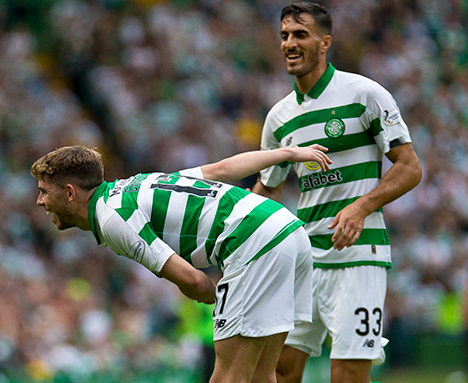 Now he’s done so after his wife and boy completed the permanent journey from Israel to meet up after his return from the Europa League trip to France for the 1-1 Europa League draw against Rennes on Thursday.

Elhamed, speaking to the Sunday Mail, said: “I haven’t been home yet and that has been tough.

“My wife and son came over after the Rennes game and it’s the first time that I’d seen them for two months.

“This is the first time they have come across in that period and I’m very happy for that.

“It is very important. To not be with them for such a long time was very difficult, especially for my son.

“I am happy that things have now changed and we are together. My son is four years old. He has the full Celtic kit now and is beginning to understand things.

“I FaceTimed him every day and it was emotional for me. I really wanted to get them to Glasgow, to pick them up from the airport.

“My son, my family, are everything for me. The emotions are very big. I was really happy they came to Glasgow.

“This will help me to be more happy and focused on the games.”

Reflecting on his performances for the Hoops since his move, Elhamed, who starred at Ibrox at full-back AND centre-half after Nir Bitton’s injury, added: “It was important to start well and get my confidence.

“At a new club in new competitions, a new challenge, I am very happy. I want to keep going and get better and better every week. 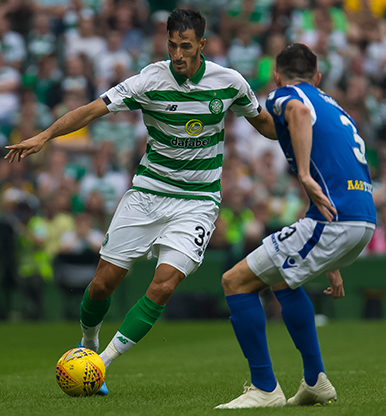 ON THE RUN…Elhamed prepares to take on a St Johnstone defender in the 7-0 romp.

“Rennes was a very positive result for us away from home.

“In the first-half, especially, I felt we played some really nice football and created some chances.

“Second-half, we defended well and prevented Rennes from getting any good chances while we scored. It was a good point for us.

“We are the backline and when you play together for a longer time you look better and you have improved communications, a better connection with each other.

“I certainly think we look better with every game and we share our work at the back. We speak a lot during the games.

“You could see this in the last couple of league games against Rangers and Hamilton where we didn’t concede.

“And I don’t remember really good chances for Rennes. We look better from game to game and we want to keep this going.

“We are a big club. We are Celtic, so we need to go with the attitude that we are a good team and want to do really great things in Europe.”