JAUNTY Jonny Hayes has put thoughts of a grand finale at Hampden next month on hold as he concentrates on winning Premiership points.

The Republic of Ireland international winger enjoyed the holders’ well-merited 3-0 Scottish Cup semi-final triumph over Aberdeen in an explosive  confrontation on Sunday that saw the Dons reduced to nine men after red cards for Dom Ball and Lewis Ferguson.

Now Hearts lie in wait at the national stadium in the silverware showdown on May 25 where the Parkhead men can complete an unprecedented treble treble.

But Hayes is refusing to look beyond the team’s trip to Edinburgh on Sunday for the crucial game against Hibs at Easter Road that could develop into a title party.

The 31-year-old speed merchant, speaking to Celtic TV, said: “Winning games is always the perfect preparation. You enjoy training that little bit more if you’re coming off the back of a victory.

“But the preparation will stay the same on what the manager wants us to put into effect at the weekend. We’re working on that all week and Hibs have our full focus.

“Every game here is big, regardless of the opposition. It’s always about ourselves and the way we prepare, so it doesn’t really matter who we play or where we play, we know it’s about us.” 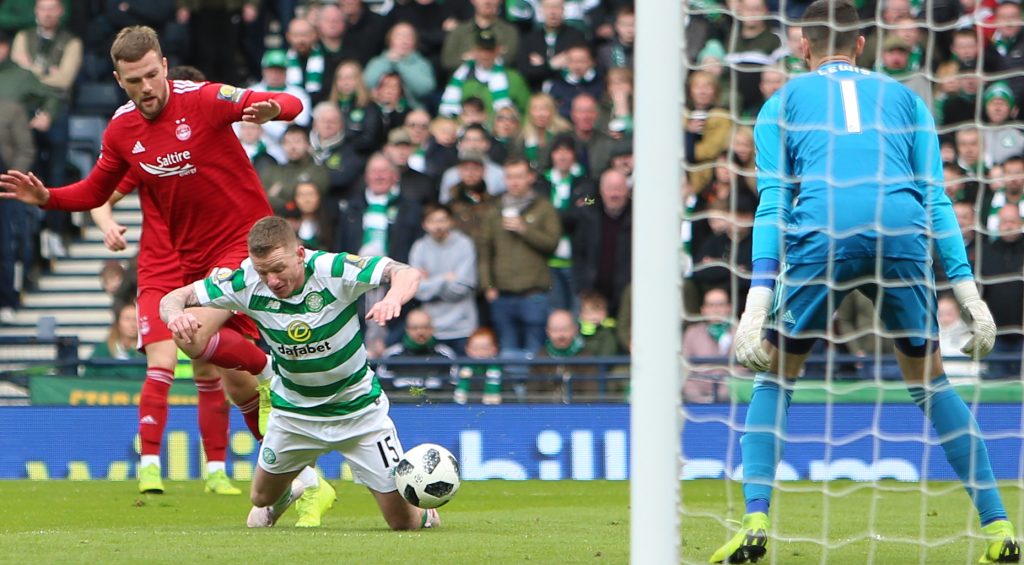 PENALTY…Jonny Hayes is floored by Dons defender Mikey Devlin for the spot-kick award from which Odsonne Edouard netted No.2.

Hayes also paid a glowing tribute to interim gaffer Neil Lennon when he added: “The manager’s been superb since he’s come in.

“I think a lot of the boys have taken confidence from him. He’s somebody who inspires players. You can see, from the teams he’s managed and the players he’s managed, that he always seems to get the best out of players.

“Everyone here is thoroughly enjoying themselves since he’s come in.

“There have not been many changes, to be honest. I’ve said it before, but John Kennedy’s played a massive role in taking the club forward and what we’ve been doing for the past couple of years has stayed the same.

“The manager has his input and we’ve had the best of both worlds – learning from Brendan while he was here and now we’re learning from the gaffer.

“You can see how much he loves the club and how much he wants us to win. That can only be a positive for us when you have someone that brings that desire into the changing room.”