JONNY HAYES revealed a sense of disappointment after playing his role in Celtic’s 2-1 win over their Ibrox visitors at Parkhead at the weekend.

The Republic of Ireland international winger got the nod from interim manager Neil Lennon to start the crucial encounter where the champions went into the game knowing a victory would push them 13 points clear at the top of the Premiership on their way to eight in a row.

Hayes was in the thick of the action in the first-half before he was withdrawn at the interval with Scott Sinclair adding more of an attacking presence against the 10-man opponents following the fifth red card of the season for Alfredo Morelos after he elbowed Scott Brown in the face in a shocking off-the-ball incident.

Hayes, speaking to this week’s Celtic View, said: “What a result! Games like that get emotional and I’m disappointed that we didn’t kick on and get two or three.

“We let them back into the game, but that resilience and winning mentality came into play again. “

Kieran Tierney limped off near the end to join Hayes on the dug-out as the match unfolded with Ryan Kent levelling Odsonne Edouard’s spectacular solo goal for the Hoops’ opener in the first-half. 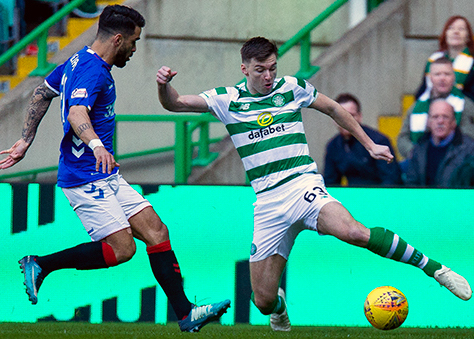 BY THE LEFT…Kieran Tierney puts pressure on Daniel Candeias.

Hayes said: “Kieran and I were both sitting next to each other watching from the sidelines and we couldn’t watch at times because of all the emotions in the game. As soon as we scored the second goal we were just waiting for the final whistle.

“Kieran and I had this joke about how much we’d pay for the final whistle right then, even though we could have scored another couple after the second. The win was paramount, and having that 13-point lead gives us a bit more of a cushion now.

“He’s scored a couple of important goals over the last couple of weeks, but that performance in the derby, with the goal and the assist, was excellent.”

Hayes is now looking forward to this evening’s match against troubled St Mirren in Paisley and added: “We have seven league games left and securing maximum points is the target.

“It might not happen, but it’s what we aim for, what we strive for. We’ll recover and then prepare for the next game, which is always the most important one.”

* DON’T miss the unbeatable match report and best images of the St Mirren v Celtic game this evening – only in your champion CQN.