Celtic Quick News on News Now
You are at:Home»Latest News»‘HE MUST HATE THE SIGHT OF ME,’ GORDON’S VIEW ON MORELOS
By CQN Magazine on 17th April 2018 Latest News

CRAIG GORDON is determined to keep the hoodoo sign on Alfredo Morelos when Celtic meet the Ibrox side in their fifth and last Glasgow derby encounter of the season.

The champions will face the Ibrox side at Parkhead a week on Sunday and have yet to sample defeat in this fixture since Brendan Rodgers took over on May 2016.

They have met 10 times with the Hoops winning eight and drawing two. So far Rodgers’ men have netted 25 times – including three victories by a four-goal margin – and conceded only six.

Gordon, in fact, has lost only three in eight outings with Dorus de Vries in goal in the 5-1 league win at Parkhead last month and Scott Bain in charge in the 3-2 victory at Ibrox last month. 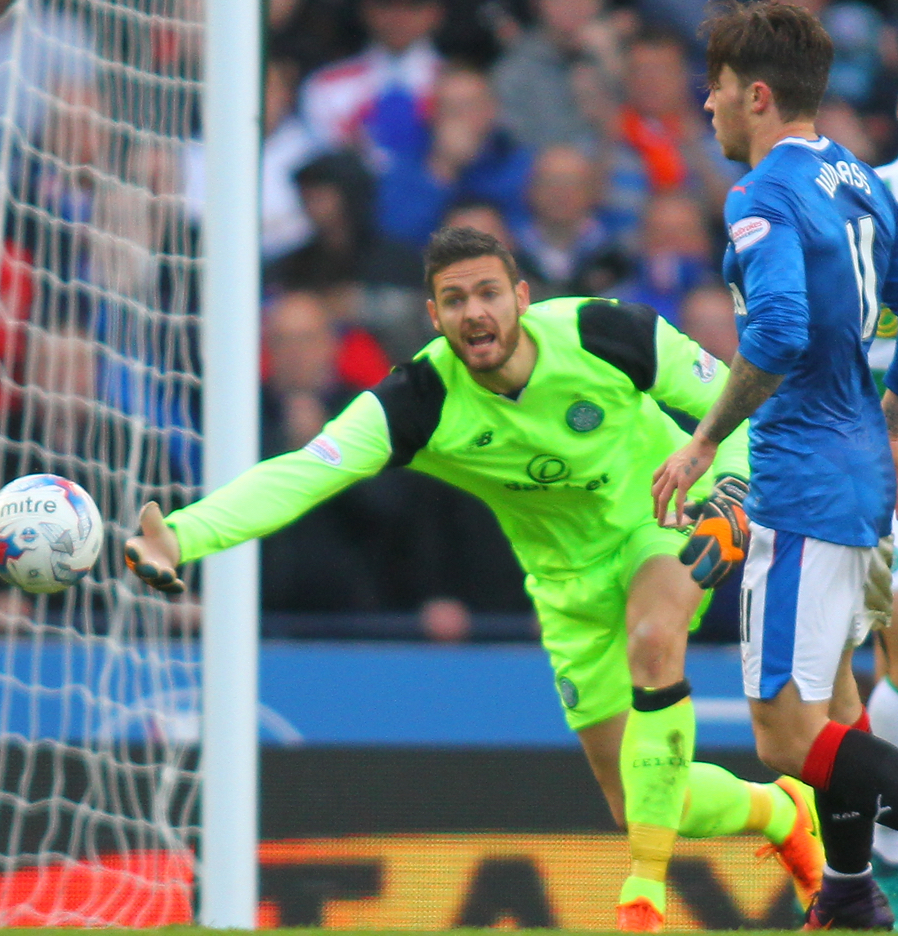 ‘TAKE IT AWAY, BHOYS”…Craig Gordon throws the ball out to start another attack as Josh Windass gets a close-up view.

The Scotland international keeper was impeccable in the 4-0 Scottish Cup semi-final triumph at the weekend and defied the Colombian striker when it looked as though he must score.

Graeme Murty’s team had a brief flurry of activity in the Celtic penalty area shortly after being reduced to 10 men following Ross McCrorie’s red card that brought about the penalty-kick which was cheekily dinked past Wes Foderingham to make it 3-0.

Gordon then produced a stunning reaction save from a close-range header from Morelos and was forced into another athletic tip over the bar from Bruno Alves’ powerful header.

However, it looked as though Gordon, playing only his second game since sustaining a knee injury in the 1-0 victory over Hibs on January 27, would have to admit defeat just before the hour mark.

He said: “It was an important stage to keep the score blank and build on what we had. It turned out to be easier, but there was a five or 10-minute spell where they created chances and I had to make a few saves.

“I was still on the ground after Mika Lustig sliced the clearance off the bar. I had dived back towards the net to try and get to to it and realised I wouldn’t get near it even if it was under the bar.

“When it crashed off the woodwork, I was trying to get myself in front of the line to make some sort of barrier.

“The rest of the goal was quite open, but with the angle he had, I was just trying to give myself an opportunity to make a block and I stuck my left leg out to deflect it away.

“I’d imagine he does hate the sight of me, but it’s nice when you get an upper hand on a striker. 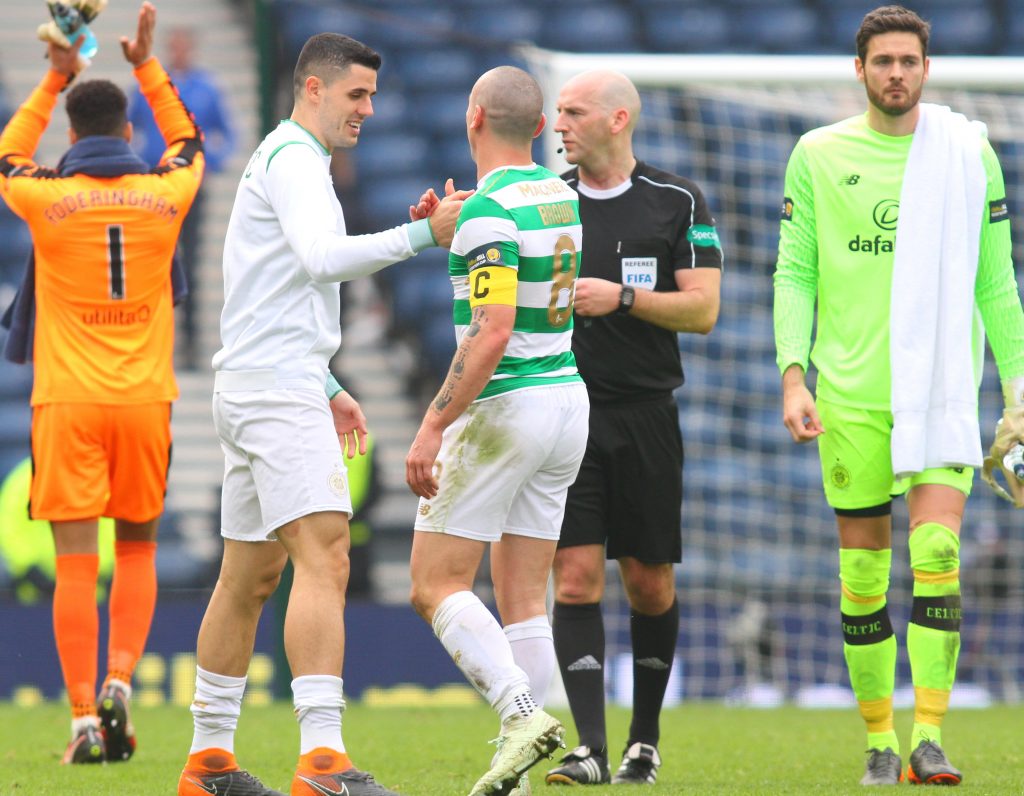 TALE OF TWO KEEPERS…Craig Gordon at the end of the semi-final rout walks away while opposition shotstopper Wes Foderingham applauds what remained of the Ibrox support. Tom Rogic and Scott Brown shake hands with
referee Bobby Madden.

“It doesn’t always happen and I’m sure he will get more chances. I’ll try my best to keep them out even if the law of averages says he will get one eventually.

“It was pleasing for me to keep a couple of his efforts out and it helped the team which is the most important thing.”

No doubt Gordon enjoyed the moment and said: “It was quite sharp – one of the best parts of my game is the reflex save and I’ve had quite a few this season.

“That was another to add to the list and it’s always good when you do it against your biggest rivals in a semi-final.

“I’ve had a few similar ones – one in the League Cup Final against Motherwell (a close-range header from Louis Moult). It’s been a good end of the ground for me and, hopefully, I can produce a few more.

“If we play the way we do then maybe I won’t have to make many more.

“We played really well in the first-half and moved the ball really quickly. We stuck to the gameplan and we knew what we wanted to do and it worked really well.

“I didn’t have to say a great deal to the guys in front of me – there wasn’t any need for me to get involved in that side of things.

“I sat back and watched what unfolded. We were really dominant and it’s always pleasing to be with a side that does that.” 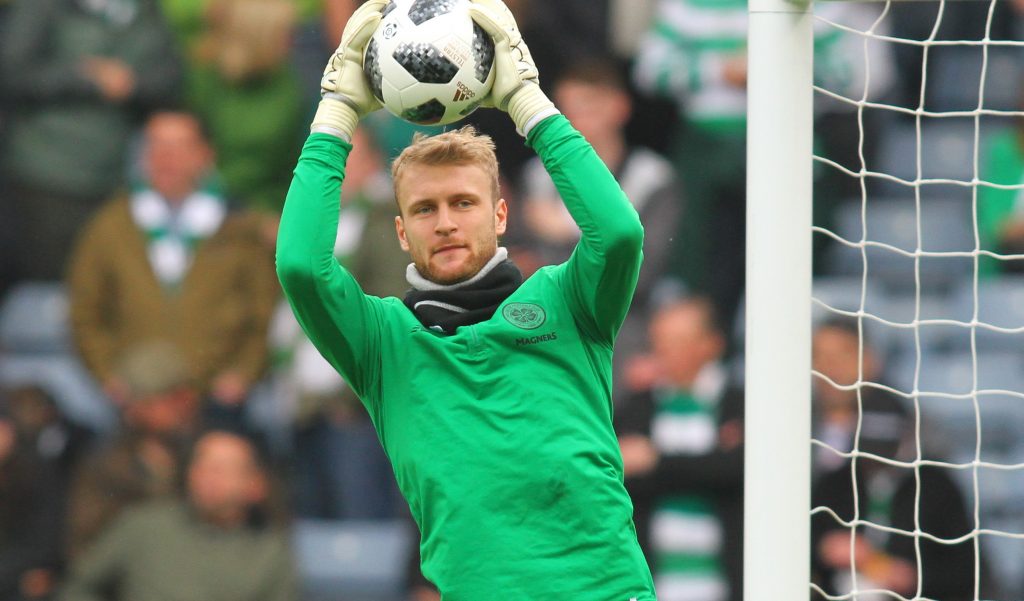 NO.1 CHALLENGER…Scott Bain gets in some practice before Sunday’s Hampden encounter. Pictures: Geo.

Gordon also admitted he relished the challenge for the No.1 spot from on-loan Scott Bain who will become a free agent in the summer when his contract at Dundee expires.

The former £9million Sunderland shotstopper said: “Scott has done very well in the four or five games he’s played. I’ve always admired Scott in games I’ve played against him and he’s a talented goalkeeper. If he signs, then it will be a challenge.

“It was nice to get out and play well and give myself a chance of featuring for the rest of the season.”

Celtic will have the chance now to build on last season’s achievements by becoming the first Scottish team to win back-to-back trebles.

Motherwell will provide the opposition in the Scottish Cup Final at Hampden on May 19, but Gordon believes there will be no let up from Brendan Rodgers’ players as they edge towards even more history.

Gordon added: “It’s a hard thing to stay on top once you get there. That’s what we’re trying to do and what motivates us to keep going.

“The manager and the staff are great at putting challenges in front of us and things to aim for and asking us to come up with the answers. So far we have done that.

“We knew we’d have to play well against Rangers, but we’ve had a good build-up with a lot of boys now back fit which is always a help.

“We’re a good squad that sticks together and when the big games come along we have put in some good performances – especially at Hampden.”