Celtic Quick News on News Now
You are at:Home»Latest News»‘HE SHOULD HAVE BEEN SENT OFF,’ INSISTS RODGERS AFTER LIVI STAR FLASHPOINT
By CQN Magazine on 11th November 2018 Latest News

CELTIC boss Brendan Rodgers insisted Livingston striker Dolly Menga should been red-carded in the first-half of the champions’ goalless draw in West Lothian this afternoon.

The bustling Belgian striker was involved in a 24th-minute flashpoint incident with Ryan Christie which should have led to instant dismissal, as CQN reported in the match summary.

Menga was clearly seen by the Hoops boss – and millions on satellite TV – as he violently thrust his head towards the face of the Hoops midfielder as they awaited a long throw-in from Alan Lithgow from the right.

Christie ignored the crude gesture and Rodgers believed the aggressor should have been banished immediately by referee Kevin Clancy.

He said: “He should have been sent off. I thought it at the time, I thought he gestured his head towards Ryan.

“When I saw it after the game it was actually more aggressive than I thought, so he was very lucky to stay on the pitch. 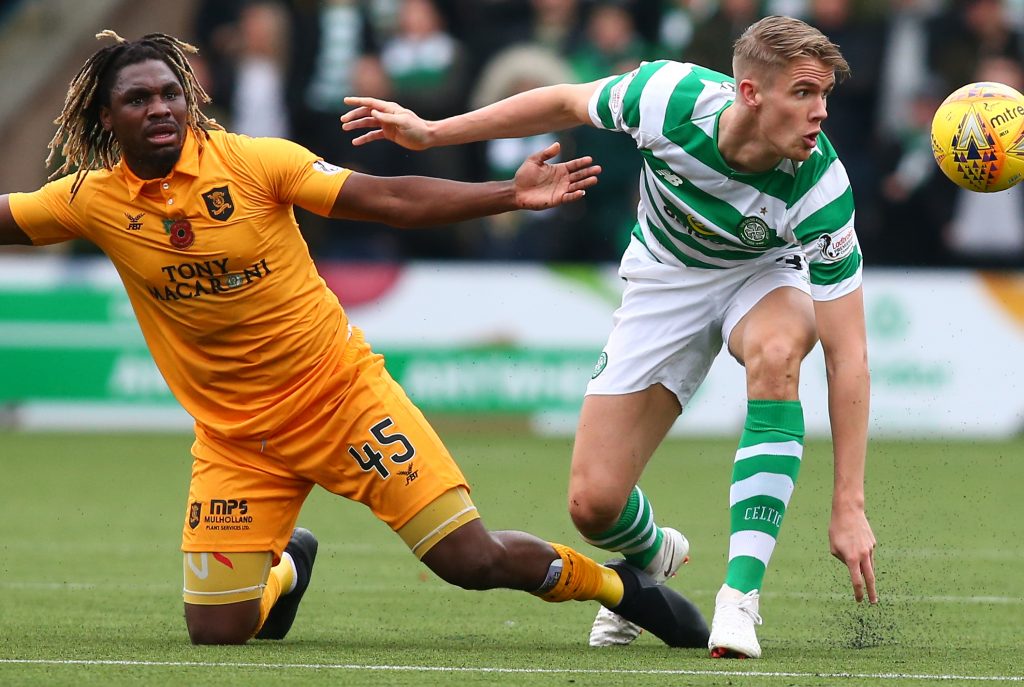 LIVID AT LIVI STRIKER…Dolly Menga is challenged by Kristoffer Ajer in a separate incident from the one boss Brendan Rodgers insisted should have seen him sent off. Pic: Geo.

“If he (Christie) goes down then it doesn’t really matter if the referee doesn’t see it.

“It wasn’t a great action by the player. But you have to assume all the officials didn’t see it.”

Menga charged around all day and spent most of the game putting in challenges on his fellow-countryman Dedryck Boyata who came out on top in the one v one situations.

Livi gaffer Gary Holt said he was unaware of the incident, but vowed to take a look at video replays.

He added: “I was not aware of it. I would need to have a look. Nobody has mentioned it. I will have to look and see.

“These things happen in football, but it’s probably nothing.”

In another incident in the second-half, Menga actually bundled Christie into the net in a similar situation, but on this occasion match official Clancy spotted the infringement and awarded the visitors a free-kick.