SO, fairytales do come true, after all.

Deep into stoppage time, Neil Lennon, on his second homecoming, watched as it looked as though two points would be surrendered against 10-man Hearts.

The champions had laid siege on the home goal, but there was no sign of a breakthrough until two minutes beyond the regulation 90, Scott Brown, who had put in a thoroughly relentless shift throughout, deftly lofted the ball into the goalmouth.

It drifted in front of Sean Clare and, as he crucially hesitated, substitute Odsonne Edouard, with impeccable timing, arrived eight yards from goal to swiftly steer the ball beyond the stranded keeper Bobby Zlamal.

The ball bulged the net and the interim manager, his players and the visiting support rose as one. The champions had maintained their eight-point advantage at the top of the Premiership in their bid for an eighth successive crown. 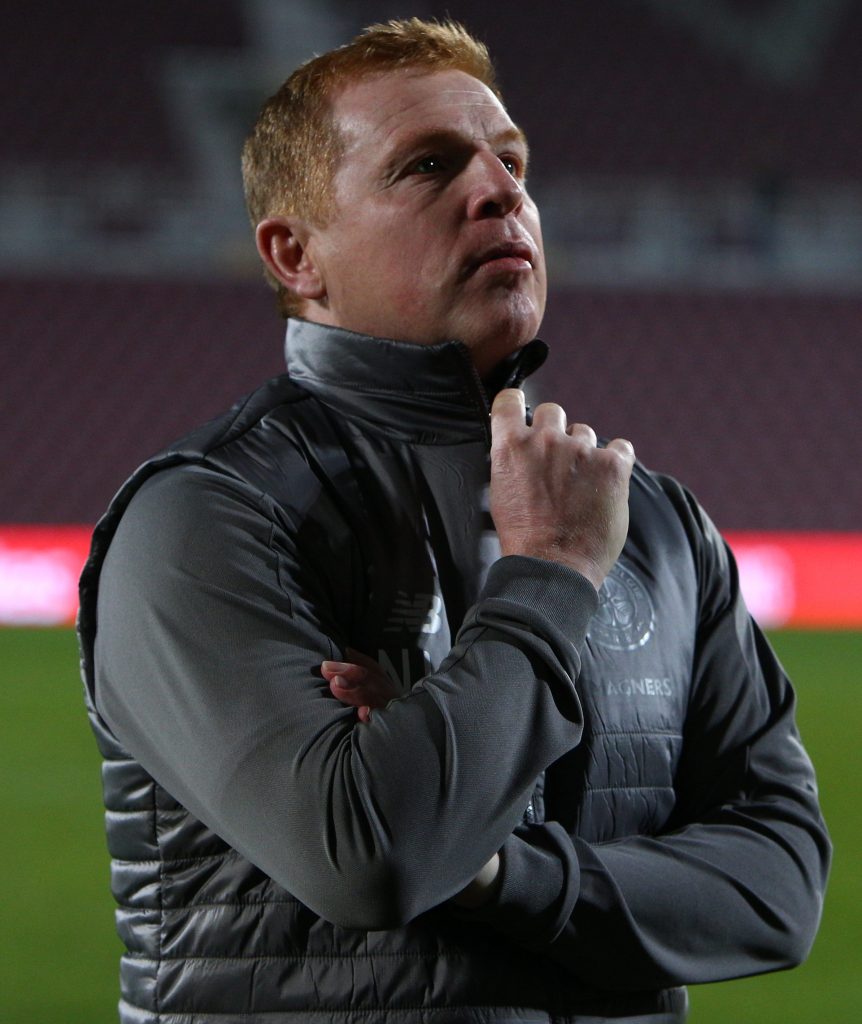 First time around, Lennon insisted he wanted to bring the thunder back to Parkhead. Tonight at Tynecastle, the stadium shook to its foundations as his team refused to settle for anything less than three points.

The goal that broke the deadlock came in the 36th minute and it was a classic counter-attack that carved open the home side.

Teenager Ewan Henderson, who made his debut on Sunday in the 4-1 win over Motherwell, got the ball rolling with an exquisite long pass that went straight to Scott Sinclair who was moving at pace on the left.

He took a touch before moving it inside to the lightning-swift Oliver Burke and he drew keeper Bobby Zlamal. Unselfishly, he knocked a pass across goal and there was James Forrest arriving right on cue to sidefoot the ball into the inviting net.

It was all done in moments of blinding precision and how Lennon celebrated on the sidelines with new assistant manager John Kennedy.

If that wasn’t bad enough for Craig Levein, he then saw defender Jamie Brandon red-carded a minute from the interval after a dangerous elbow-led mid-air challenge on Jeremy Toljan. 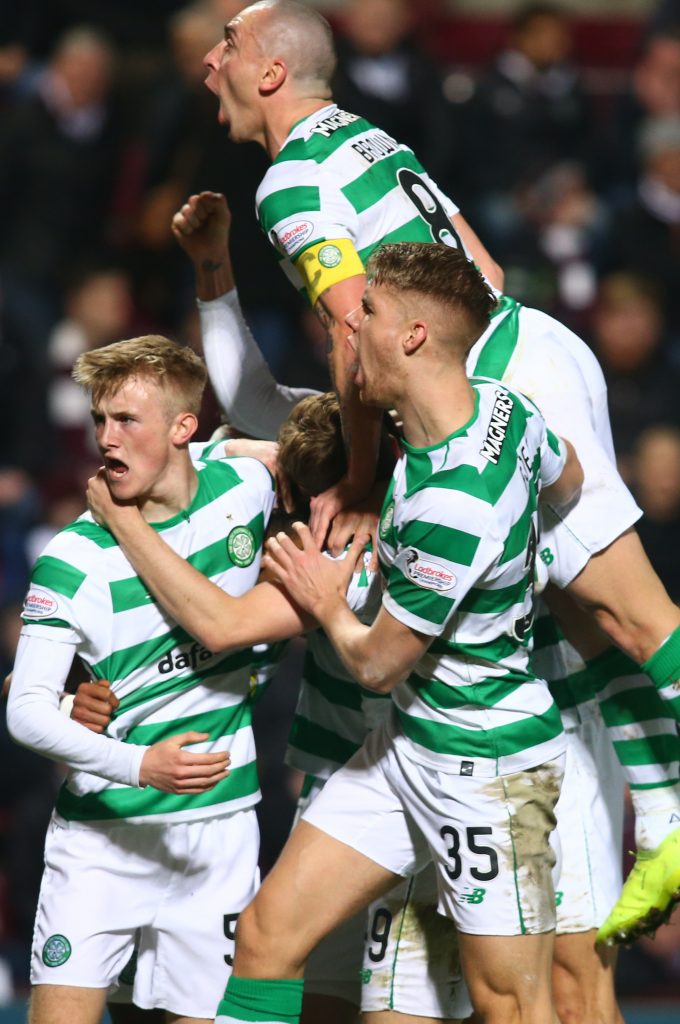 It was a typical action in a rough and tumble occasion when no quarter was asked nor given.

The first-half hammered along at a furious pace with tackles flying in from all angles and Levein’s side setting out to bully their opponents. So, no change there, then.

Rampaging attack-leader Uche Ikpeazu banged into everything that was in the vicinity as he tried to soften up the Hoops back-line. He is a jobbing centre-forward with the finesse of an elephant with cramp and the subtlety of a wrecking ball, but you have to grant him credit for effort. When this guy’s around the central defenders realise they are in for a tough old evening.

Dedryck Boyata may have been unsetttled enough to make an awful pass that was intercepted by Steven Naismith who zipped past the distraught Belgian defender, but tugged his shot wide of the keeper’s right-hand post.

Pathetically, the Hearts forward yelped for a penalty-kick. Memo to Naismith: You need to be in the 18-yard box to achieve a spot-kick award plus there was no foul. You couldn’t hit the target, deal with it.

Brown was booked for a foul on Peter Haring who had also been yellow-carded for a chalenge on Kristpffer Ajer. Naismith picked up his mandatory caution for a swipe at the Celtic skipper.

A round of applause, too, for a breathtaking save from Scott Bain when the game was goalless. The defence fell asleep as a right-wing corner-kick dropped into the box and Clare met it sweetly first-time to drill a low ball towards the bottom right-hand corner of the net.

The agile shotstopper swooped low to get a fingertip to the effort to divert it wide of the target.

The Hoops deserved their half-time advantage, but a total breakdown in communication from Bain and Ajer allowed the Edinburgh side back into the game with the present of a penalty-kick 10 minutes after the turnaround. 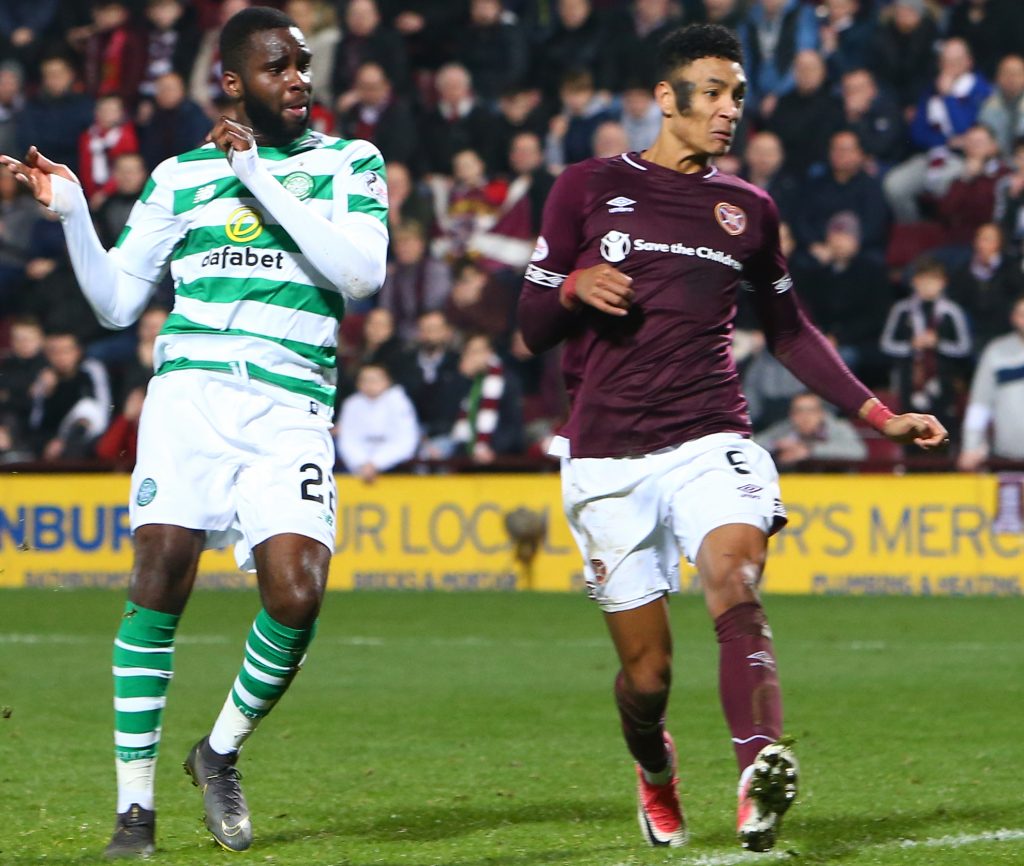 BETTER LATE THAN NEVER…Odsonne Edouard gets in front of Sean Clare to knock in the winner.

The keeper knocked the ball wide to the central defender inside his own box and it would be fair to say the Norwegian did not appreciate the pass in an awkward position.

As he mistimed his control, the ball went to Arnaud Djoum who went down a tad theatrically as Ajer tried to retrieve the situation.

The penalty was duly awarded and Oliver Bozanic swept it low to the keeper’s right as Bain took off to his left.

It was a dreadful goal to give away and could have cost Lennon and Celtic dear until Edouard made his timely intervention.

Lennon had earlier freshened up the team just after the hour mark when he introduced Edouard for Henderson, who again looked a quality prospect. He had one clever effort in the second-half that was just off target, but the teenager did not look out of place in a midfield bereft of the talents of Callum McGregor and Ryan Christie. 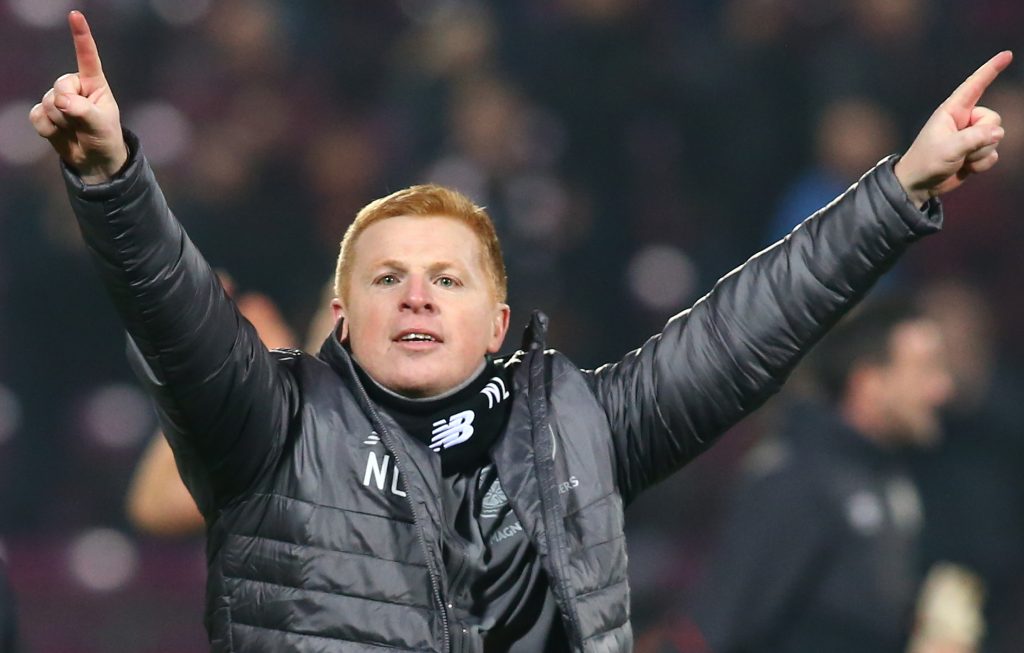 HAPPY DAZE…Neil Lennon celebrates at the end of a dramatic encounter.

Timothy Weah was introduced for the tiring Sinclair 10 minutes from the end and then Mikael Lustig was sent on for Toljan , who had been booked and the interim gaffer wasn’t taking the risk of a second card.

The Irishman is only 90 minutes – plus four in stoppage time – into his role as Celtic boss the sequel, but he has already managed to achieve something that was outwith Brendan Rodgers’ capabilities.

He has won a Premiership game at Tynecastle this season.