If Steven Gerrard’s Ibrox side fail to beat Hearts in today’s High Noon clash at Tynecastle, it would open the door for a Hoops triumph in Leith to add the side’s FIFTIETH crown.

Former Leeds Head Coach Heckingbottom’s only defeat in an impressive start at the Edinburgh outfit came against the Parkhead men in February when goals from James Forrest and Scott Brown gave the holders a 2-0 Scottish Cup quarter-final win.

Since taking over, the new gaffer has won six games from eight, drawn one and lost to tomorrow afternoon’s opponents.

Neil Lennon’s successor recalled how he was a reluctant participant in Newcastle United’s party two years ago.

Heckingbottom was in charge of Barnsley when they were hammered 3-0 by the St James’ Park outfit on the final day of the campaign to clinch the Championship title.

Speaking to the Evening Times, the manager admitted: “No-one would like it, but me, personally, I would hate it.

“I would be jealous. That’s what you play for, to get in the position they are in. 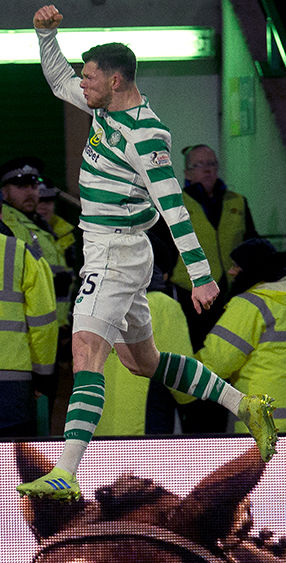 “We might be able to chase something down ourselves, that’s our goal. We had it at Barnsley in the last game of the season at Newcastle. You are a bit part.

“They have earned the right to be in that position, but we are chasing our own things and from our own position we want to do our job for ourselves.

“It’s strange, we’d had a good season, but we weren’t playing for anything by that point against Newcastle, so you almost feel as if you are making the numbers up.

“It was 3-0, they went two up early on. I’d have walked on myself and given them the trophy just to get off the pitch.”

Heckingbottom is hoping to overcome the champions and added: “Hopefully, we can start on a high, we don’t want to lose the game as we want to be in that top three, four.

“It is going to be tough, a lot of people wrote us off getting the top six and maybe we can shut a few more people up.

“We’re still six points away with five to play and if we do make that top four it’s going to be a momentous task from the full squad.

“Playing against the best teams make it harder, but the belief is there with the run we’ve been on just now.”