CELTIC head for Ibrox on Sunday looking for their first win over Steven Gerrard’s side at the fifth attempt in a disappointing campaign.

If John Kennedy’s players are looking for inspiration they need look no further than a confrontation in Govan on a sunny afternoon on April 29 2001 when Martin O’Neill’s all-stars ran amok in a gloriously one-sided affair.

Who can forget the confrontation when Henrik Larsson thumped in his 50th goal in a prolific campaign and the astute Lubomir Moravcik chipped in with a double in a joyous 3-0 success? 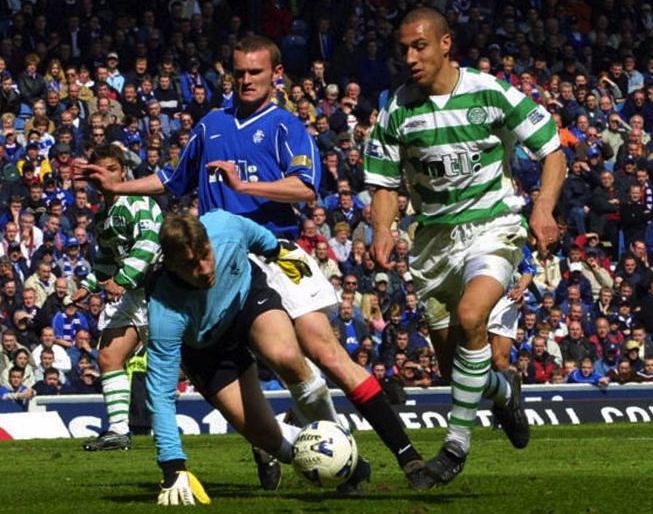 Before that runaway win which emphasised the gulf in class between Celtic and Rangers, there was the game that became known as ‘Demolition Derby’ when new boss O’Neill celebrated his first Old Firm confrontation with an extraordinary 6-2 romp at Parkhead in August 2000 shortly after he had moved into the Hoops hot seat.

Author Alex Gordon recalls the Irishman’s remarkable debut campaign in his latest Celtic book, ’50 Flags Plus One’.  In an edited chapter, Alex, veteran of fifteen Hoops publications, looks at a colourful, captivating season in the club’s history when they achieved their 37th crown. He recalls the rampant performance against Dick Advocaat’s stunned visitors as Chris Sutton and Henrik Larsson claimed doubles and Stiliyan Petrov and Paul Lambert claimed the others. In the aftermath of an epic scoreline, he writes:

MARTIN O’NEILL said: “Maybe the result highlighted Rangers aren’t quite as good as they think they are. There are still only two teams who can win the league and it is far too early yet to say which of us it will be. But just so long as Celtic don’t get carried away by this one result and continue going about things the way we have been so far, I think you could see me celebrating come the end of the season.”

Chris Sutton added: “It was a great win. I may be new here, but I am aware of the feeling that exists between these teams. The derby games are vitally important and this is a good start. The main thing for everyone at this club is to win the SPL championship. That is our priority. If we keep winning, they’ll have to play catch-up and we’ll see how that suits them.”

The championship – the thirty-seventh in the club’s history – was delivered on Sunday, April 7 in front of a crowd of 60,440, the biggest in Scotland throughout the season. There were five games still to go when St Mirren turned up in the east end of Glasgow in the forlorn hope of postponing Flag Day and the crowning of new champions. Johan Mjallby and Alan Thompson hit the woodwork, Henrik Larsson proved he was human by fluffing his final effort with just keeper Ludovic Roy to beat and a variety of other efforts flew high and wide. It was left to Tommy Johnson to snatch the glory goal seven minutes from the interval. 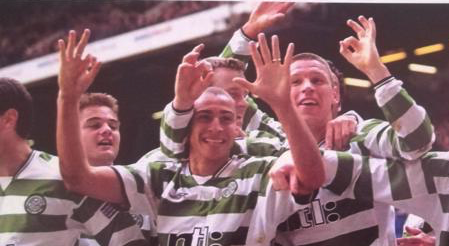 THE BIG FIVE-O…Henrik Larsson is congratulated by his team-mates after scoring his 50th goal of the season at Ibrox. 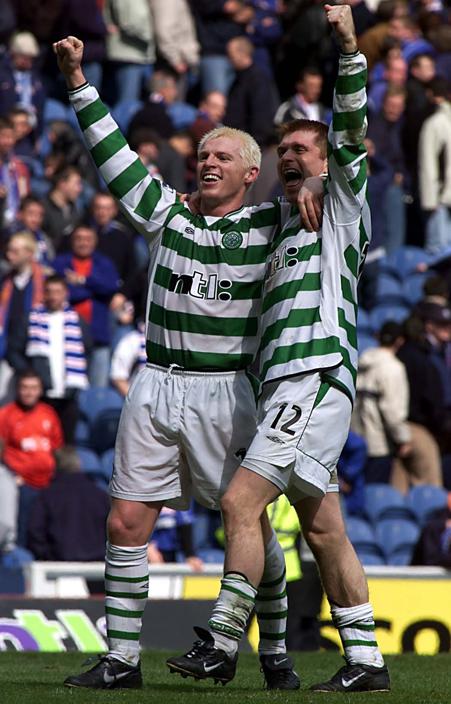 Martin O’Neill’s side already had the League Cup in the trophy cabinet following Larsson’s hat-trick in the 3-0 romp against Kilmarnock at Hampden on March 18. After the victory over St Mirren, Celtic were one step removed from their first domestic treble since the heady days of the legendary Jock Stein in 1969. Hibs barred their way to the milestone, the Edinburgh side lying in wait after reaching the Scottish Cup Final which would bring down the season’s curtain at the national stadium on May 26. Henrik Larsson fired in a double after Jackie McNamara, an early replacement for the limping Lubor Moravcik, had got the ball rolling to record a successive three-goal Hampden showpiece celebration.

The recollection of an eventful 2000/01 season is told with insider knowledge by Alex Gordon, a former Sports Editor of the Sunday Mail, whose latest book, ’50 Flags Plus One’, is hailed by Lisbon Lion Bertie Auld as “a truly unique tribute to Celtic”.