CALLUM McGREGOR deserves great praise for not allowing Brendan Rodgers not to mess with his head.

The Celtic midfielder was on the ex-Hoops gaffer’s wish list for Leicester City in the summer, but there was no way the champions were prepared to allow their Scotland international playmaker to leave.

McGregor saw team-mate Kieran Tierney make his record-breaking £25million switch to Arsenal, but stayed put at Parkhead as Neil Lennon rebuilt his squad for a tilt at nine in a row.

Former Hoops striker Chris Sutton, speaking in the Daily Record, hailed the Glaswegian for his consistency, durability and marvellous performance in the 2-0 Europa League Group E victory on Thursday.

He said: “McGregor is an absolute phenomenon. His talent is one thing, but his durability is quite another.

“There were times in the early stages of the season where you wondered if a combination of factors were starting to have a negative effect.

“It would have been perfectly understandable. McGregor has barely had a holiday in the past two years and has played non-stop for three.

“His appearance total last season for club and country was the highest on the planet. Staleness, surely, had to be an issue. Not just physically, but mentally.

“Chuck into the mix the interest which came his way from Leicester City. Brendan Rodgers made no secret of the fact he rated him as top quality during his time as Parkhead boss and it wasn’t a shock he wanted him in the Premier League.

“At the age of 26, it would have been a big chance for McGregor. With Kieran Tierney going to Arsenal, Celtic could not afford to let him go.

“Now McGregor doesn’t strike me as being someone who would rock the boat or kick up a fuss to move as he clearly loves Celtic.

“But you wouldn’t be human if missing out on the chance to go south of the border to play in such a glamorous league with the type of wages which are on offer didn’t swirl around your head for a bit. 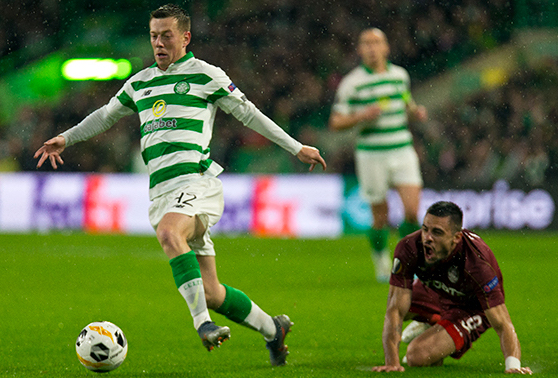 ON THE RUN…Callum McGregor in action against Cluj.

“Having been told he was too valuable to let go, yet being the one shunted to left-back when Cluj were in Glasgow the last time for one of the biggest games of the season which was lost may also have messed with his mind. Whatever the reasons, the spark seemed missing.

“But there were signs in recent weeks that it was coming back in his role alongside Scott Brown.

“Against Rennes, McGregor was terrific in the engine-room.”

Sutton added: “Easter Road last Saturday was another good showing, but the midfielder was really back to his brilliant best against Cluj. All aspects of his game were spot on.

“The ball retention was superb, the touch was there. The vision and weight of pass to put Boli Bolingoli away at the opener was exquisite and he also did the dirty work.

“McGregor covered, he pressed, he harried and won the ball back before using it properly. It was a tremendous all-round show.

“His appetite for the game seems undiluted. I know what it’s like to slog through 50-odd games a season and it’s tough to keep a freshness in your play, but, for the main part, he’s done so.

“If he stays in his current vein of form over the next few months, Celtic are going to have another huge season.”

McGregor will go into action again tomorrow when Lennon takes his champions to Livingston to perform on the plastic pitch at the Tony Macaroni Stadium.

The champions hit a brick wall just under a year ago with Rodgers in charge. It ended goalless with the Hoops well off the pace on an afternoon to forget.

Lennon saw his team lose their 100 per cent Premiership record against Hibs at Easter Road a week ago today in their eighth game.

The Irishman will be relying on players such as McGregor to make sure Scotland’s title kings remain on track for nine in a row.