Celtic Quick News on News Now
You are at:Home»Latest News»‘HE’S ALREADY FALLEN IN LOVE WITH THE CLUB,’ POSTECOGLOU IN JOTA CLAIM
By CQN Magazine on 23rd October 2021 Latest News

FILIPE JOTA has already fallen in love with Celtic, according to manager Ange Postecoglou.

And the Hoops boss joked the board should “put some money aside” in an attempt to secure the Benfica winger on a permanent deal when his loan contract expires at the end of the season.

The Lisbon giants have slapped a £6.5million valuation on the exciting 22-year-old raider who has already become a favourite with the fans since his summer arrival.

THUMB’S UP…Filipe Jota signals that all is good at Celtic.

Jota scored the winner against Aberdeen at Pittodrie just before the international break and followed that up with the opener in last weekend’s 2-0 victory over Motherwell at Fir Park. And the Portuguese flyer brought over 50,000 followers to their feet with his breathtaking long-range pass that released Kyogo Furuhashi to fire in the first goal in the 2-0 Europa League Group G triumph over Ferencvaros on Tuesday afternoon.

The youngster will get another opportunity to display his incredible range of skills when Postecoglou’s men take on St Johnstone in the east end of Glasgow this afternoon.

That prompted calls for the player to be signed IMMEDIATELY, but the Greek-Australian gaffer said: “I don’t know if it works that way, if that’s how they (board) do things – if I’d need to tell them to put some money aside.

“We’ll always make decisions that are in the best interests of the football club and also the player.

“Jota is just starting his career, but he’s already fallen in love with the club.

“He loves the environment here and the supporters. Who wouldn’t?

WHCHEVER WAY YOU LOOK AT IT…Filipe Jota is clearly enjoying life at Celtic as he celebrates his opening goal against Motherwell at Fir Park that pushed the Hoops towards a 2-0 victory and three crucial points.

“Who wouldn’t want to play for a football club where you get 60,000 cheering you on? The crowd is something special.

“Let’s just let him enjoy it. Those kind of decisions will come in due course.

“From our perspective, I know everyone here is the same, we’ll do what’s best for the football club moving forward and that will be in consultation with the player’s wishes.”

Postecoglou, speaking to the Daily Record, added: “I said a couple of weeks ago that we are now working towards January and we’ll definitely need to bolster the squad then. I’ve got no doubt about that.

“It will be nothing major, but we’ll need to bring in a couple of players, at least.

“We’re not going to be in any rush about that mainly for two reasons.

ONE TOUCH…Kyogo Furuhashi controls the ball and moves forward. 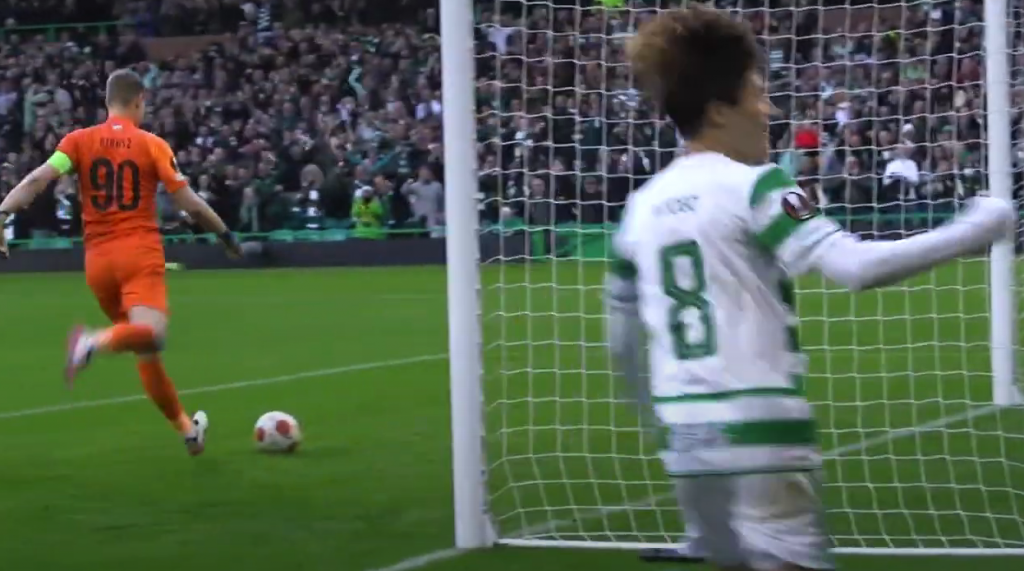 DELIGHT AND DESPAIR…Kyogo celebrates as the Hungarian keeper prepares to give the ball a mighty dunt. 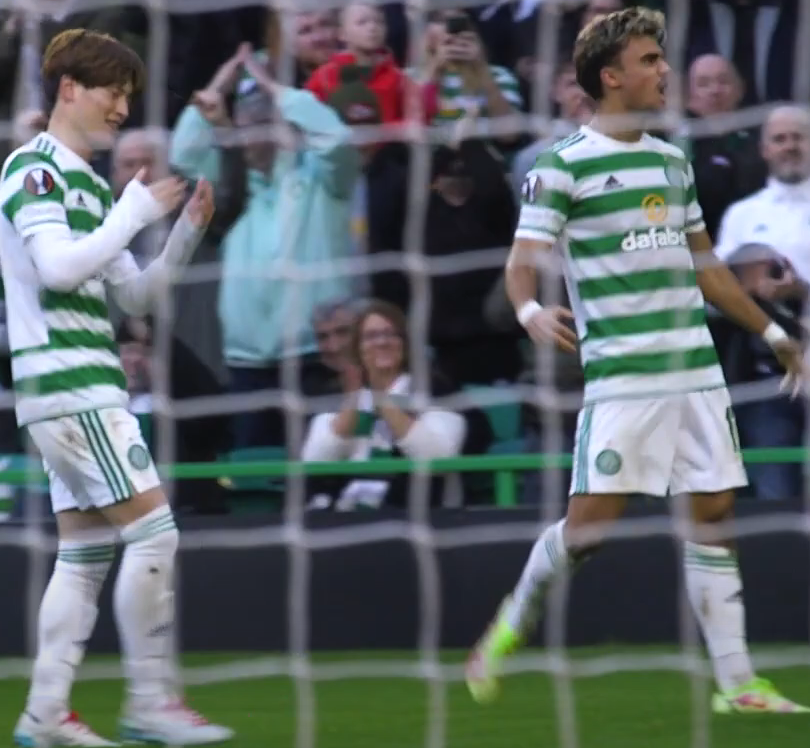 NET PROPHETS…Kyogo Furuhashi and Filipe Jota share the joy with the Celtic fans.

“One is that, we’ve just brought in 12 players and there are four or five others who are literally just beginning their Celtic careers having been at this club.

“I want to see how all these players settle in and see what gaps we really have because the assessment we make now might be different in two months’ time.

“So, we’re not going to be rushing into any business too early.

“Secondly, I’m not going to limit ourselves. Obviously, I know the Japanese league really well and I know Japanese players.

“So, I guess that’s where I have an advantage over others, but we’re not going to limit ourselves to one part of the world.

“For us at the moment, the pleasing thing is that from the outside people have seen players come here and they see we’re developing them and they are playing good football.

“That makes us an attractive destination. I’m not going to lock ourselves into one or two targets this early on.”