Celtic Quick News on News Now
You are at:Home»Match Report»HIBS 0 CELTIC 0: BROWN AND OUT IN NO-SCORE SNORE
By CQN Magazine on 15th May 2021 Match Report

CELTIC’S wretched season drifted into oblivion with a scoreless confrontation at Easter Road this afternoon.

It was a low-key farewell for veteran skipper Scott Brown after 14 years of sterling service for the fallen champions. The last game of the Premiership campaign fizzled out and quietly headed into unwanted history.

No-one could have been surprised. Without motivation and nothing at stake, it became a monotonous performance with the club enduring their first trophyless term in 11 years.

Much work is required at Parkhead this summer. If we didn’t know it beforehand, it was well and truly hamered home in the capital during a yawn-inducing non-spectacle. 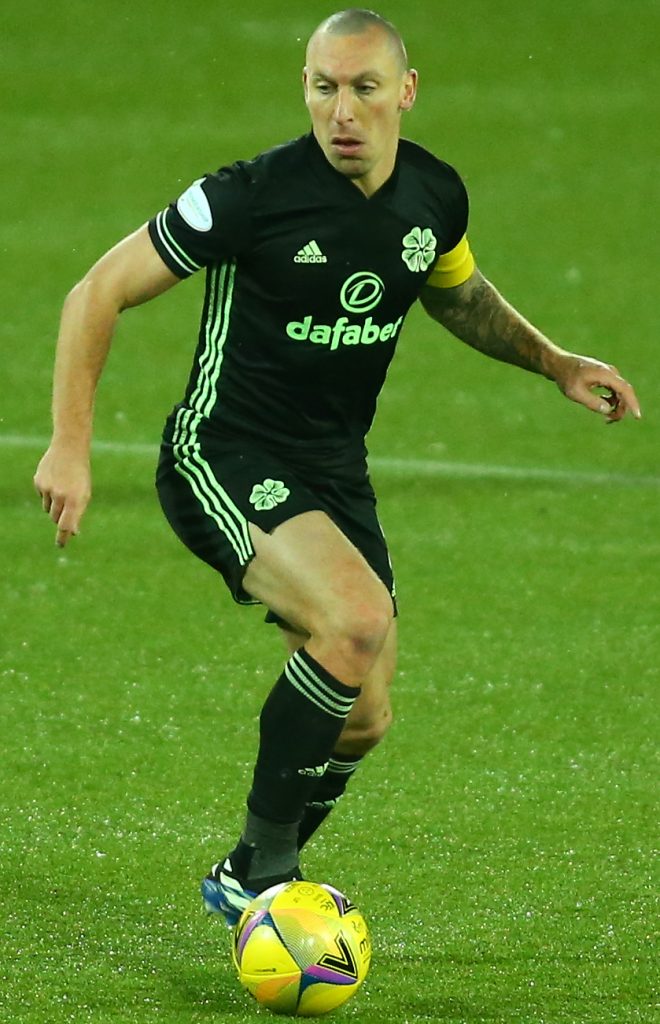 The first goal threat came in the sixth minute from the visitors with Brown and Greg Taylor combining to set up Mohamed Elyounoussi, but his angled drive was scrambled off the goal-line by Darren McGregor with keeper Ofir Marciano beaten at the near post.

In the 14th minute, it was Elyounoussi again who passed up the opportunity to get the opener. He latched onto a superb lay-off from Odsonne Edouard, weaved away from the outrushing Marciano and should have scored at the angle. However, he allowed the netminder to stretch himself to get a hand to the effort and turn it past the post. A little more guile would have seen the Norwegian lift the ball towards the net.

A minute later, Marciano blocked a rasping 20-yard drive from David Turnbull and Ryan Christie made a mess of the rebound. He failed to make proper contact with the ricochet and then headed tamely into the hands of the grateful Israel international No.1, who, like Brown, was making his last league appearance for his club.

Remarkably, Marciano defied the Hoops again in the 25th minute when the busy Elyounoussi turned neatly in the box to fire in a crisp low left foot shot, but the shotstopper spread himself to get a fingertip to the attempt and divert it wide of the far upright. 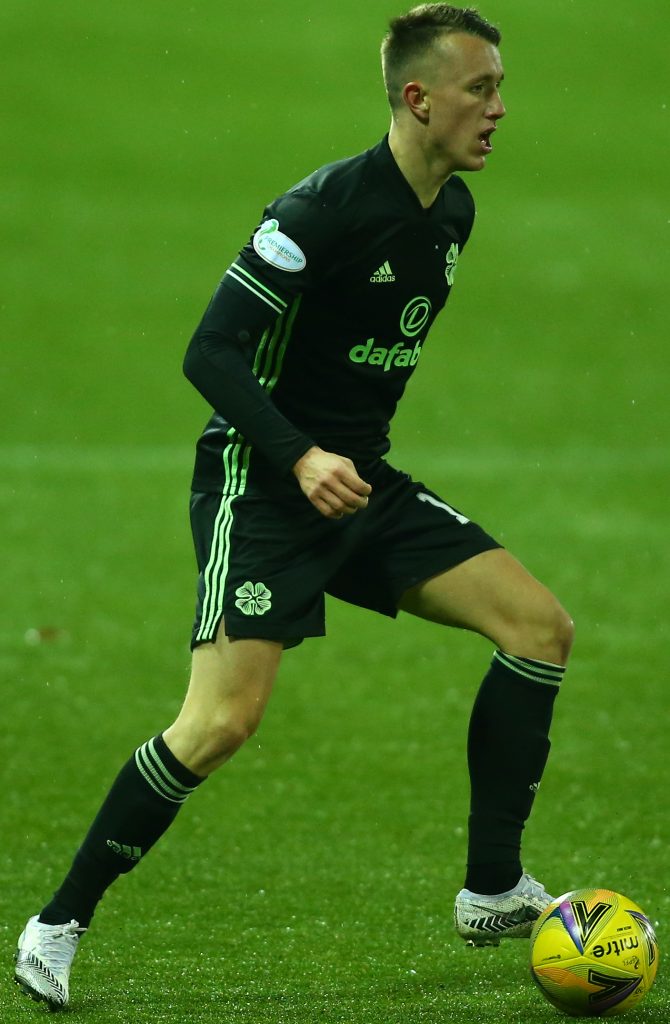 ON THE BALL…the skilful David Turnbull.

In the 33rd minute, Edouard swept a 25-yard free-kick high past Marciano into the keeper’s top right-hand corner, but over-fussy referee Willie Collum blew for an infringement just as the Frenchman struck the ball. Edouard smashed the retake into the defensive wall.

Ref Collum had awarded the set-play after Kristoffer Ajer, following one of the centre-back’s rampaging runs into enemy territory, had been sent crashing by Alex Gogic. It was a yellow-card offence, but the match official took no action which was in direct contrast to his quickfire reactions in the tenth minute when he booked Jonjoe Kenny after a challenge on Jamie Murphy.

In the 42nd minute, Drey Wright clearly tugged at Taylor as he tried to set up a shot at Vasilis Barkas. Blundering whistler Collum was willing to allow play to continue before his assistant flagged for the offence. 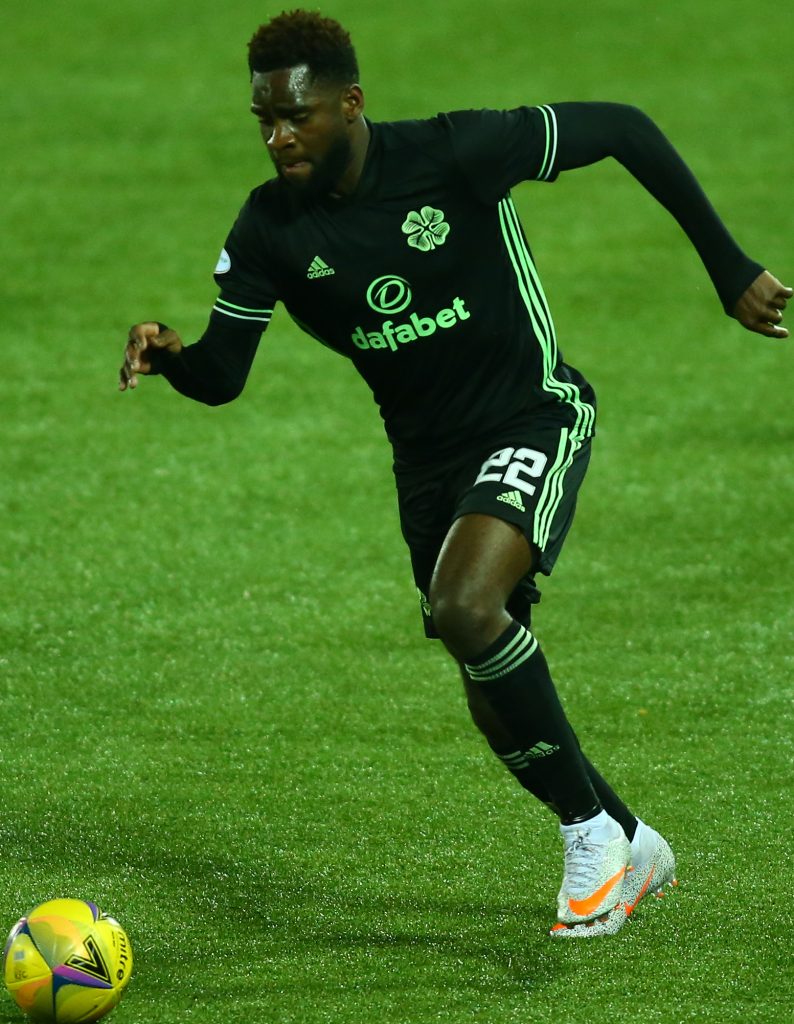 ON THE MOVE…Odsonne Edouard will be heading out in the summer.

Brown, as ever, had been busy during the opening half as he covered the area in front of Stephen Welsh and Ajer while linking with his long-time partner Callum McGregor in the middle of the park.

Six minutes after the turnaround, Welsh tussled with Murphy and Collum flashed the yellow card without a moment’s hesitation. Infuriatingly, it came only moments after Kyle Magennis had gone through the back of Taylor. The free-kick was awarded, but no action taken against the Hibs culprit.

In 58 minutes. Gogic was booked when he threw a wayward arm into the face of Taylor. There was no argument from the home defender and the ref had little option.

Three minutes later, Leigh Griffiths and James Forrest came on for Edouard and Christie with the two exiting players possibly making their last appearances for Celtic. 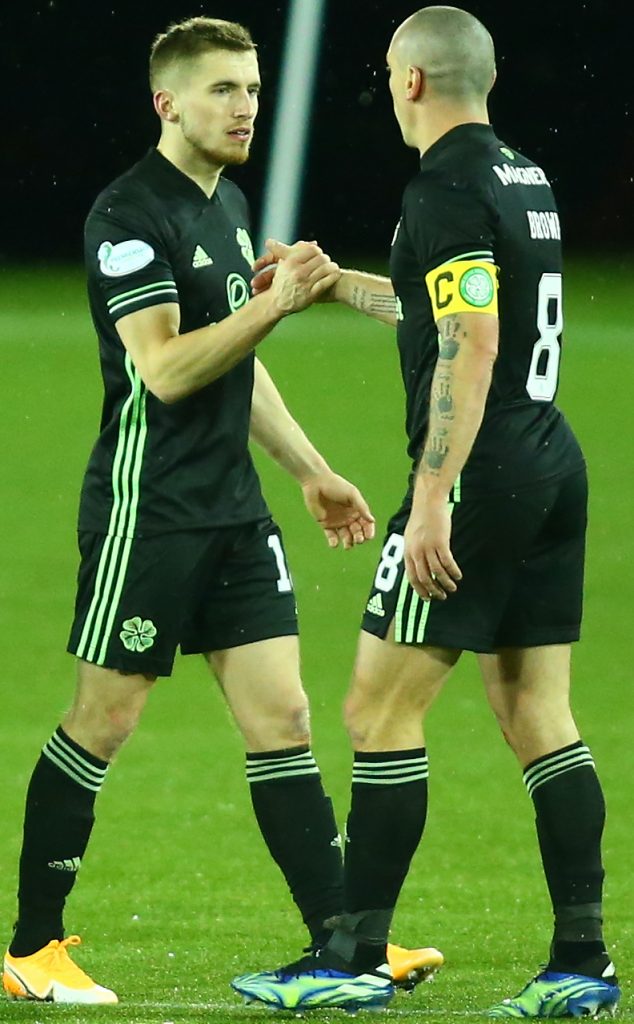 THE END GAME…Scott Brown and Jonjoe Kenny both say farewell to Celtic.

Next on for the Hoops were Karamoko Dembele, who scored his first competitive goal in the 4-0 romp against St Johnstone in midweek, and teenage left-back Adam Montgomery who came on for Elyounoussi and Taylor in the 81st minute.

Their joint introduction, unfortunately, did little to raise the tempo of the encounter as it petered towards a sad and scoreless conclusion.

The story of Celtic’s abysmal season.