A DOUBLE dose of thunder fired Celtic through to the Scottish Cup semi-final after a wonderful display against Hibs at Easter Road this evening.

It was happy returns for Neil Lennon as he guided the Hoops nearer to the historic treble treble – and humbled the club who dismissed him in January.

In the second minute, the Hoops showed their positive side when Odsonne Edouard sent Oliver Burke scurrying through and the powerful attacker zipped in a low angled drive from the left.

Keeper Ofir Marciano dived full-length to his left to push the effort away and Scott Sinclair attempted to snap onto the rebound. However, his close-range attempt took a nick off a defender to go wide, but, astonishingly, referee Willie Collum awarded the Edinburgh side a goal-kick.

Florian Kamberi was fortunate to get off with a finger-wagging from the match official after a late challenge on Captain Marvel Brown. It could so easily have been a yellow card. 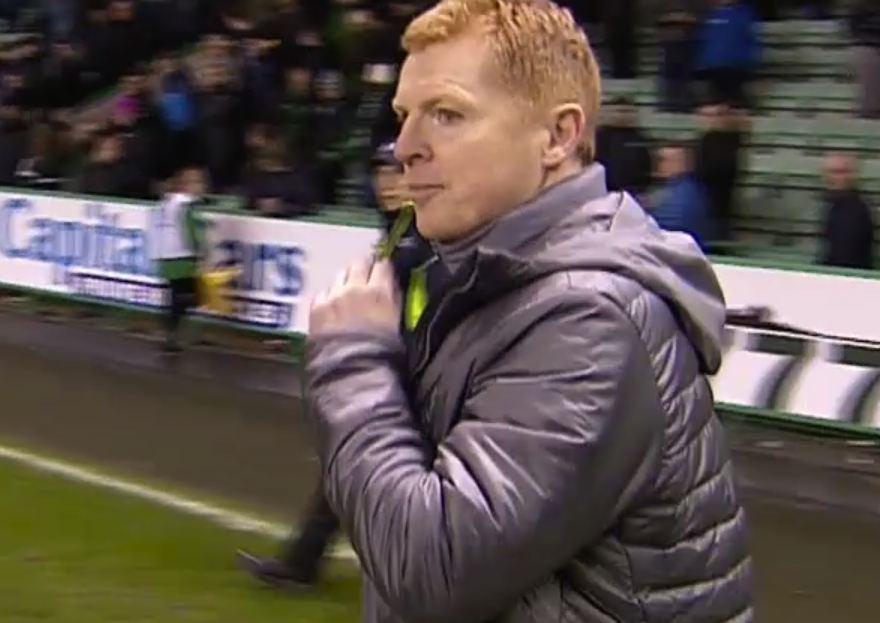 In the 17th minute, Mikael Lustig, chosen ahead of Jeremy Toljan, battled gamely on the right flank before getting in a near-post cross which was well held by the Hibs No.1.

The reply from the Edinburgh outfit was a drive on the left wing and a shot from Marc McNulty, but Scott Bain took the low effort with ease.

Wind swirled around the sporting arena with rain spilling from the clouds as the holders did their utmost to take a stranglehold on the contest.

In the 31st minute, Kamberi had a disgraceful dive at the attempt to con the ref into a penalty-kick following a challenge from Nir Bitton. There was minimal contact – if any – and his pleas were ignored. Once again, the Swiss player was fortunate not to be booked for obvious simulation.

Moments later, Edouard looked as though he was poised to claim the breakthrough goal, but, unfortunately, the Frenchman lost his footing at the crucial time and the chance was lost.

Kieran Tierney created problems with a whiplash left-wing cross that was bravely punched away by the acrobatic Marciano. The ball fell to Burke, but his volley was way off target.

Scott Sinclair spoiled a good move forward when he took a rush of blood to the head and shot wildly past the keeper’s right-hand post from 30 yards with Edouard and Forrest racing into good positions.

Half-time arrived with honours even in conditions that weren’t exactly conducive to entertaining, attractive football.

That didn’t appear to bother skipper and onfield leader Brown, who, once again, looked confident as he patrolled the back-four and the midfield. moving the ball around slickly and accurately.

Nir Bitton was slow to see the danger on the Hoops’ left when he allowed Kamberi to sling in a high ball and Bain had to be alert to get up and fist clear from McNulty. 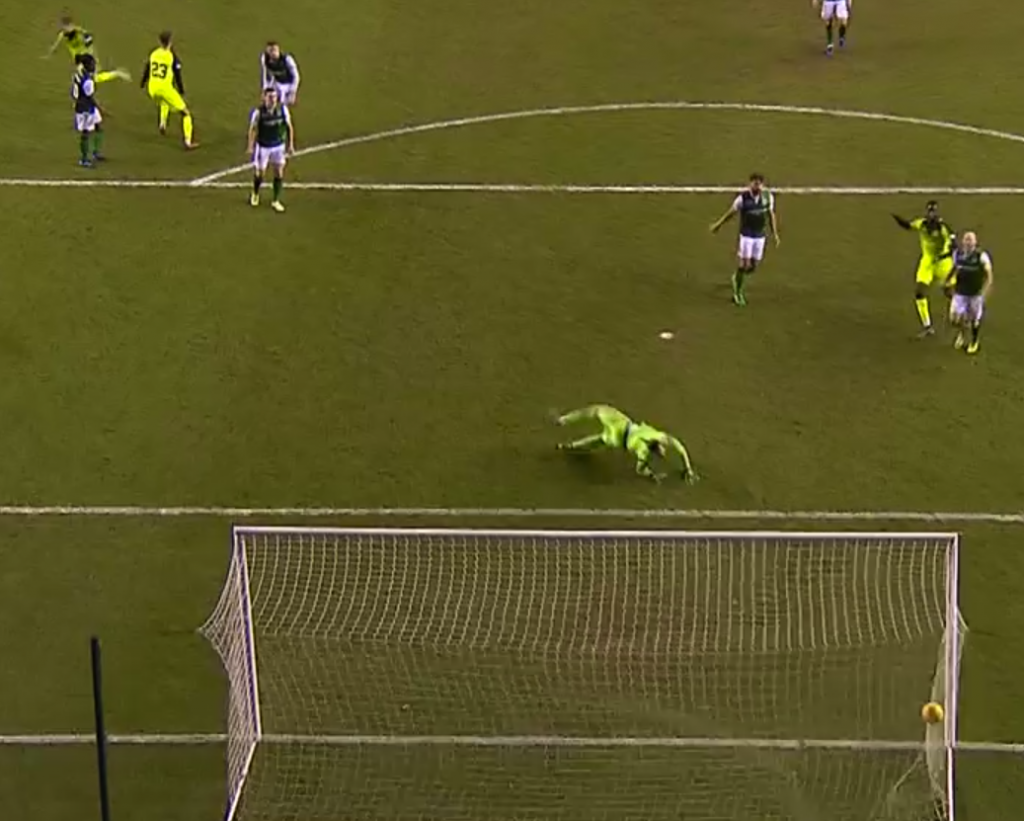 WHOOSH…James Forrest, top left, turns away, as his drive slams into the net with Hibs keeper Ofir Marciano helpless.

In the 52nd minute, slack control from Edouard from a great ball from Burke on the right saw an opportunity pass and moments later Bain made a fine save from a low 20-yard drive from McNulty.

It was all helter-skelkter stuff at Easter Road with no-one getting breathing space or the time to put their foot on the ball and attempt to make a killer pass.

In the 57th minute, referee Collum halted play for a moment after a bottle was thrown from the Hibs supporters’ end in the direction of Sinclair as he moved to take a left-wing corner-kick. The home side can expect retribution from the SFA once the match official’s report arrives.

Hibs’ cause won’t be helped by another object that was thrown at the same player at another corner-kick later on from the same section.

On the hour mark, Burke, bursting through on goal following a neat back-heel from Edouard, was sent spinning just outside the box, but, remarkably, the whistler saw no offence.

Two minutes later, the holders broke the stubborn deadlock when Forrest worked some magic 25 yards out as he gathered a pass, changed direction, drifted away from two Hibs players and set up an opportunity 20 yards out.

The winger weighed up the situation in a flash before thundering in an unstoppable right-foot drive which raged high past the keeper’s right hand as it strangled itself in the net.

Forrest, with his 15th strike of the season, took the acclaim of his team-mates and the support as the holders edged closer to a place in the semi-final.

Celtic went for the killer goal and Bitton had a long-range blast that was blocked after some quality work on the left by Tierney.

In the 75th minute, the impeccable captain Brown walloped in his third goal in rapid succession after going two years without registering. 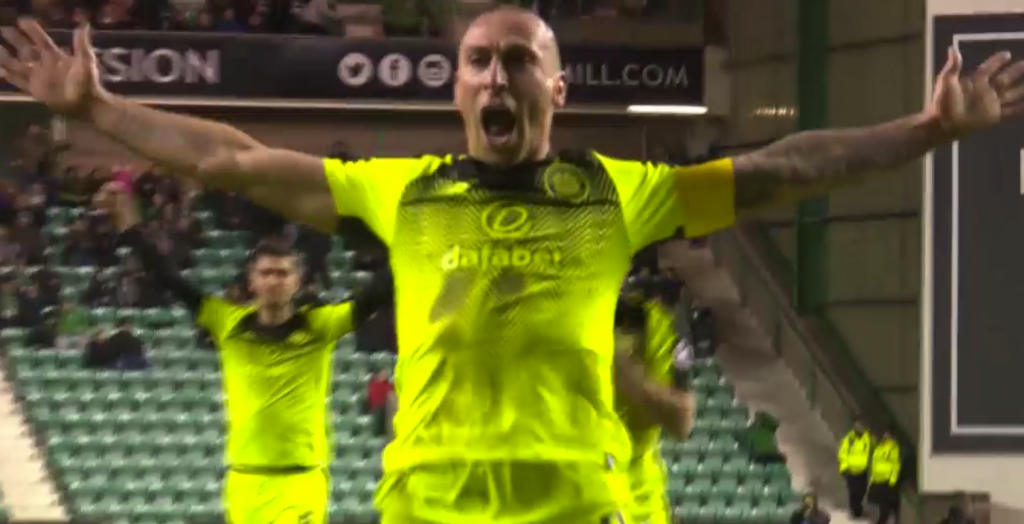 And what a role the skipper played in the goal from start to finish. He robbed a Hibs player just inside their own half to send away Edouard who was forced wide on the left.

The French ace retrieved the situation before rolling the ball back in front of Brown as he raced into an advanced position on the edge of the box.

The 33-year-old took a touch to open up a shooting opportunity and Marciano wouldn’t have even seen the ball as it rocketed beyond him for a magnificent effort.

A minute later, Lennon sent on Mikey Johnston for Sinclair as the Hoops looked to keep control.

Jeremy Toljan came on for Dedryck Boyata in the 85th minute as Lustig moved to central defence and shortly afterwards Ewan Henderson replaced the limping Burke, who had worked tirelessly from the first whistle.

At full-time, Celtic’s name was in the semi-final draw and potentially two games away from the first hat-trick in this competition in the club’s history.

All that and a full-house of 60,000 to welcome back Neil Lennon to Parkhead against Aberdeen on Saturday.

There could be treble treble ahead.