JACKIE McNAMARA had to battle throughout his rollercoaster ten-year Celtic career to prove he merited a first-team place to six different managers.

He was bought by Tommy Burns from Dunfermline for £600,000 in October 1995 and continued to perform on the right-hand side in a variety of Hoops line-ups during the reins of Wim Jansen, Jozef Venglos, John Barnes, Kenny Dalglish (in an interim capacity) and Martin O’Neill before surprisingly leaving the club to join Glenn Hoddle at Wolves.

The fight to prove his worth continued at the Midlands club and carried on at Aberdeen, Falkirk and Partick Thistle before he moved into management at the Firhill club, Dundee United and York City. 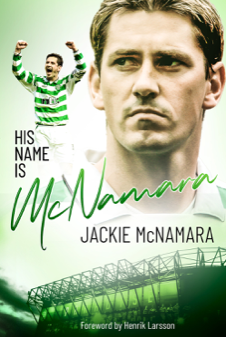 READ ALL ABOUT IT…Jackie McNamara’s compelling life story.
Throughout an acclaimed career – earning four titles, three Scottish Cups and three League Cups at Parkhead – McNamara’s courage has never been in question. Likewise on the international front where he won thirty-three caps for Scotland and was chosen by Craig Brown for the World Cup Finals in France in the summer of 1998.
However, on Saturday February 8 in 2020, the individual had to draw on reserves of fortitude hitherto unknown to stay alive after being struck down by a brain aneurysm.
The story is told in stark and compelling terms in the ex-Celt’s autobiography, ‘His Name Is McNamara’, published by Pitch Publishing.
It is an extraordinary and compelling read, stylishly co-authored by Gerard McDade, that takes you behind the public personna of a player who relentlessly and unfailingly produced the goods when he was given the call by his variety of managers.
The prologue sets out 48-year-old McNamara’s extraordinary life story with the opening three lines:
‘Me?
‘I’m a fighter.
‘Always have been.’
Those seven words present the the tone of a journey through football and beyond. 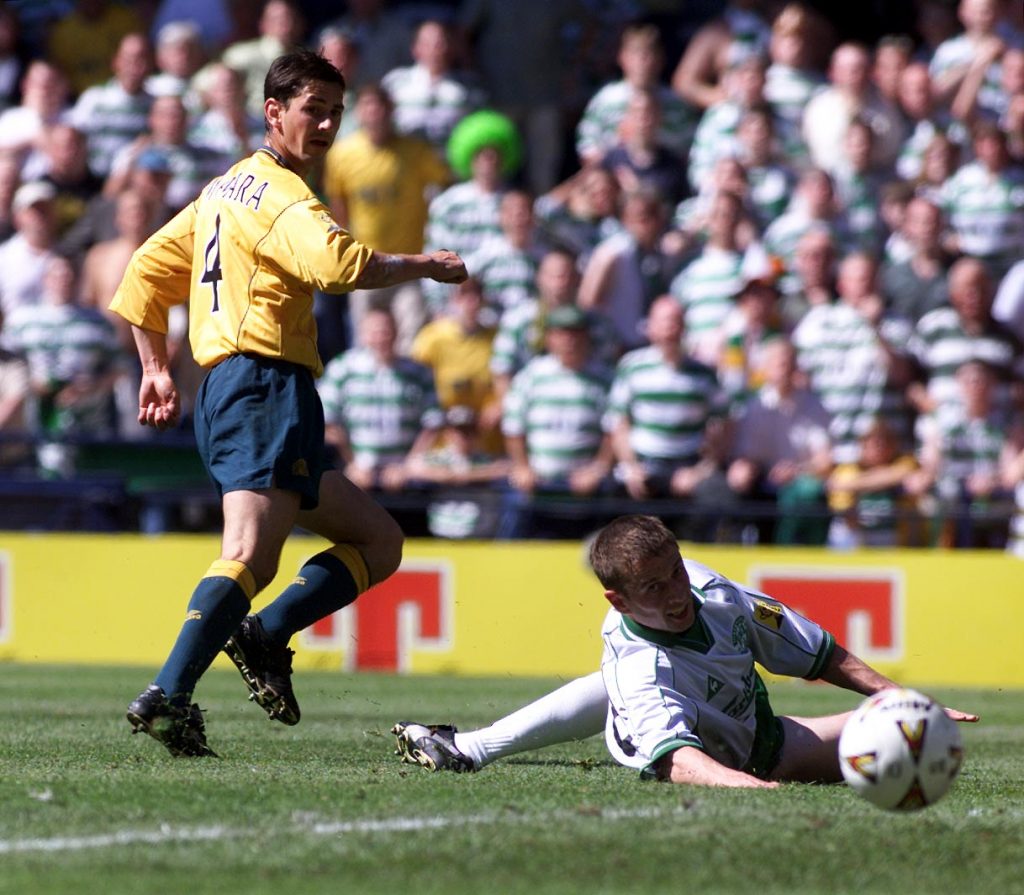 HAMPDEN HERO…Jackie McNamara slips the ball past desperate Hibs defender Gary Smith to open the scoring in the 2001 Scottish Cup Final. Team-mate and friend Henrik Larsson added two more as Celtic coasted to a 3-0 triumph.
To this reviewer, the chapter entitled ‘Reflections’ was particularly poignant on so many levels.
The presentation is insightful, invigorating and enjoyable in equal measures, well crafted by McNamara and McDade and tells a captivating and gripping tale.
It’s a quality book on a quality human being and well worth five stars.
Click Here for Comments >
Share. Twitter Facebook Google+ Pinterest LinkedIn Tumblr Email
Previous ArticleCLOBBERED ON CHRISTMAS DAY: CELTIC SHOCKER FOR CLUB LEGEND
Next Article THE UNFORGETTABLE BERTIE AULD: PART THREE: ‘CHEEKY CHARLIE TULLY – A MIX OF JINKY AND BESTIE’