Celtic Quick News on News Now
You are at:Home»Exclusive Series»HISTORY BHOYS: BRENDAN RODGERS: PART FIVE
By CQN Magazine on 28th October 2018 Exclusive Series
BRENDAN RODGERS travelled to Hampden on Sunday, November 29, 2016 with a double target – to lift his first piece of silverware as Celtic manager and also win the 100th major trophy in the history of the club.
The Hoops were due to take on a resurgent Aberdeen team in the Betfred League Cup Final and the tension was electric before kick-off.
Today, in Part Five of CQN’s EXCLUSIVE extracts from Alex Gordon’s publication ‘CELTIC: The History Bhoys’, we turn the spotlight on an amazing grande finale at the national stadium. 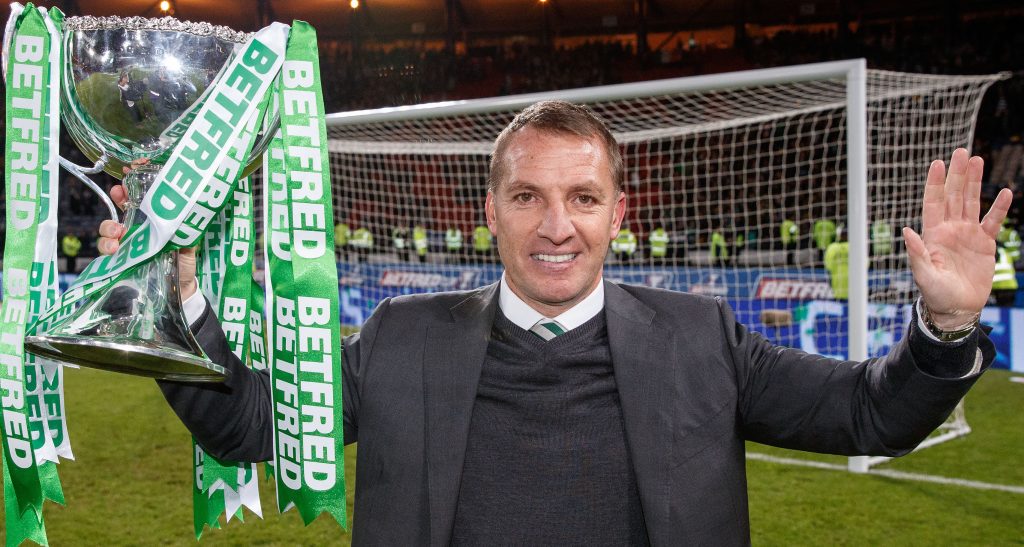 THE 100TH TROPHY…Brendan Rodgers becomes a Celtic Centurian in his first season.
CELTIC 3 ABERDEEN 0
THE moment Wizard of Oz Tom Rogic stepped inside Graeme Shinnie onto his cultured left foot in the sixteenth minute, there was only going to one winner in the 2016/17 League Cup Final on a brisk, invigorating Sunday afternoon at Hampden.
Aberdeen had arrived at the national stadium on a tidal wave of positivity and promises and there were many who insisted the Pittodrie outfit had a genuine opportunity of postponing Celtic’s bid for their 100th major piece of silverware. Those beliefs were buried amid the rubble of rash optimism before the interval had arrived.
Rogic, an Australian playmaker with the happy knack of conjuring magical goals out of nothing, had already put Derek McInnes’ side twice to the sword during the season. He netted in the champions’ 4-1 triumph in Glasgow in August and followed that up with the only goal of a tense Pittodrie occasion in October. Could he keep the run going in the Cup Final? Or had the Dons learned from their harsh lessons?
We didn’t have long to wait for the answer. Jozo Simunovic determinedly pushed forward out of defence before sliding a pass in front of Rogic, idling on the right. With skipper Shimmie trying to force him down the line, the classy Celt cut inside onto his trusty left foot and curled a low shot past the stretching Joe Lewis. It was exquisite in its execution. 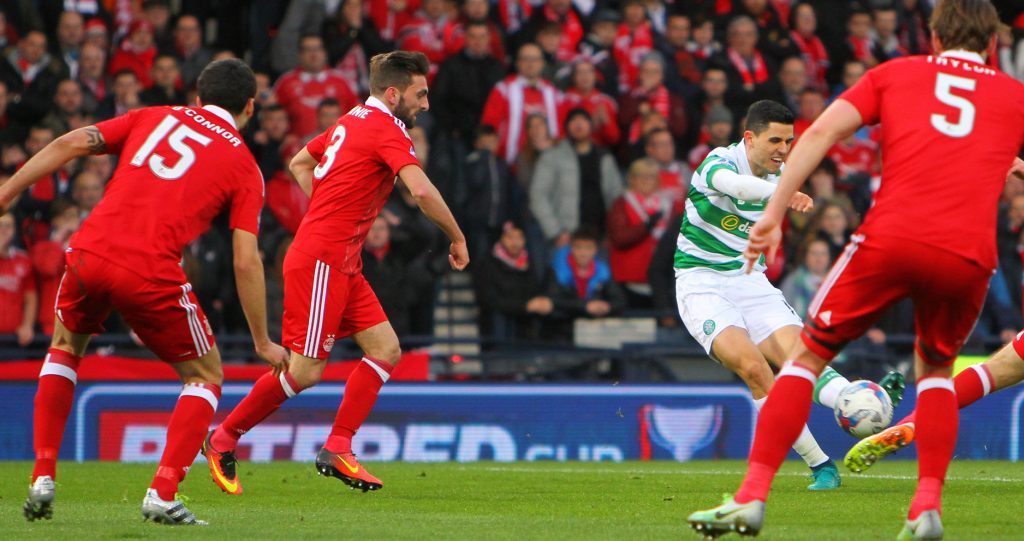 GOAL No.1…Tom Rogic delivers left-foot special to break the Dons barrier.
Twenty-four minutes after his team-mate’s masterly strike, James Forrest latched onto a Rogic pass just inside his own half and jinked and shimmied his way through the heart of the retreating rearguard. Anthony O’Connor and James Maddison were beguiled by his neat and nimble footwork. The winger, rejuvenated under the guidance of Brendan Rodgers, drove with pace and menace as the fans in Mount Florida held their breath in expectation. The Celtic fraternity were not to be disappointed.
As a frantic Andy Considine attempted a last-ditch intervention, Forrest took aim and let fly from just inside the box and his deadly-accurate blast flew like an arrow straight and low past Lewis at his right-hand side. The ball strangled itself in the rigging behind the fallen Dons keeper at precisely the same moment the travelling supporters realised their dreams of a Hampden sensation had evaporated.

GOAL No.2…James Forrest turns away in delight after leaving Dons keeper Joe Lewis and defenders in his wake.
It was all over in sixty-fourth minute when Forrest, producing a Man of the Match display, raced onto a pass from Rogic before being felled by O’Connor. Little doubt about the penalty-kick award and likewise the outcome as Moussa Dembele strode forward purposely and deftly piloted the ball into one corner as Lewis moved to the other. 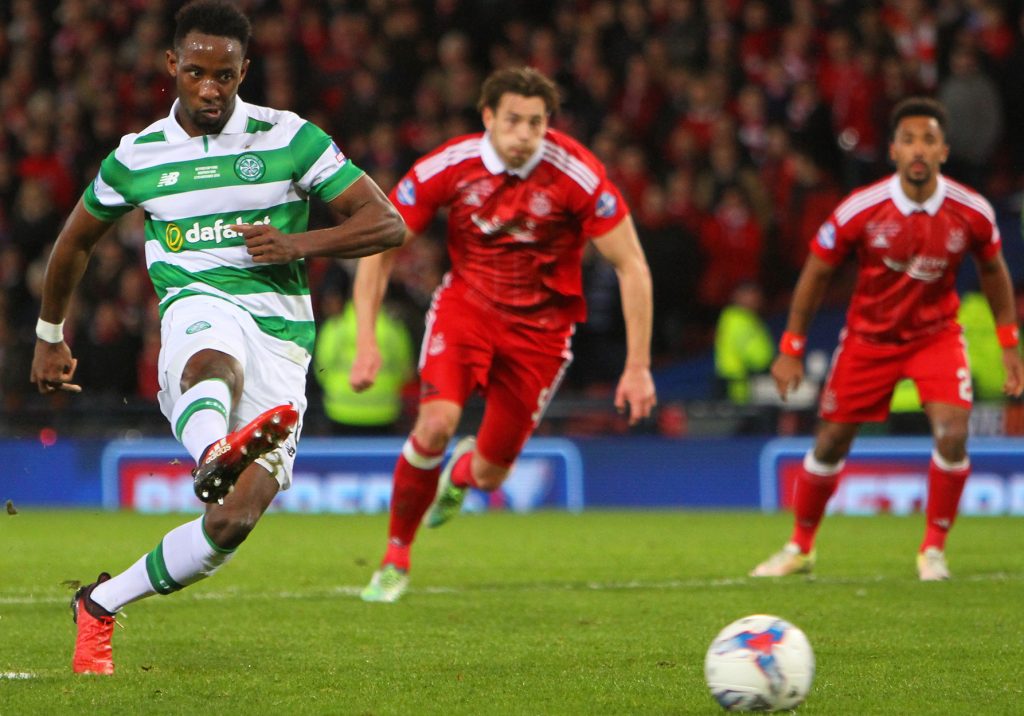 GOAL No.3…Moussa Dembele rolls in a penalty-kick to bring down the final curtain.
On the rare occasions the Dons threatened, Craig Gordon was there to keep them at bay. The Scotland international, a month before his thirty-fourth birthday, had gone through the tournament with conceding a goal and he smiled afterwards: “That’s always important for a goalkeeper and the men in front of him. And we’ve got guys who can score goals from all different angles going forward, so we’re looking really good at the moment. It’s a great team to be part of and we’re in a good place going forward.”
Emphasising the excellence of the Celtic showing was the fact they had played in a gruelling Champions League encounter against Lionel Messi-inspired Barcelona at Parkhead the previous Wednesday. They lost 2-0, but might have deserved more against the Catalan superstars who killed the contest with a dodgy penalty-kick in the second-half. 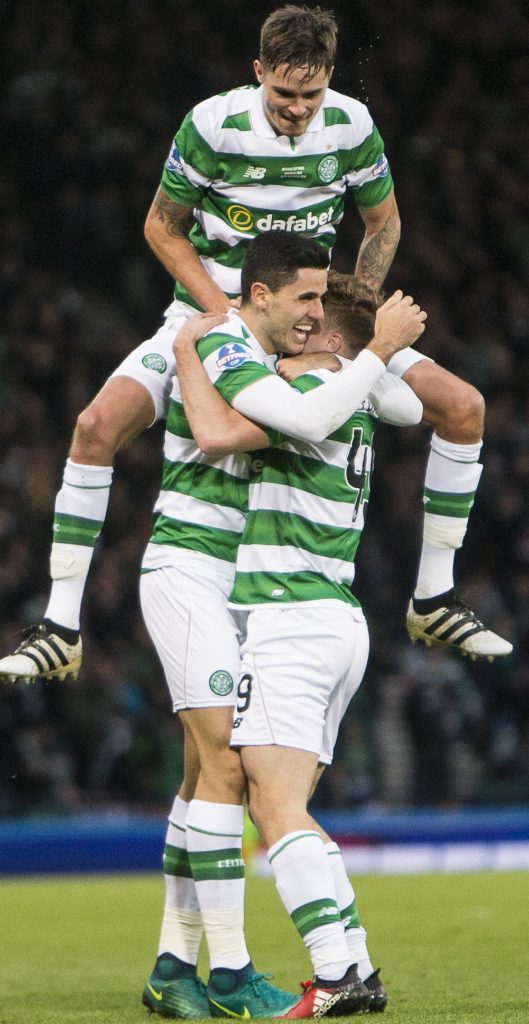 TOP BHOY…Mikael Lustig joins in the party with goalscorers Tom Rogic and James Forrest.
However, that did not prevent Brendan Rodgers from beaming brightly as he held aloft his first silverware as Celtic manager while exclaiming excitedly: “I am delighted for the football club. It’s about six months and a week since I came in. We talked about what we wanted to achieve and how we wanted to do it. We are certainly well on our way to doing that. I was very pleased with the performance.
“It’s something tangible to show for our efforts. Everyone has talked about the great start and the great football, but you want something to show for it. This was out first chance and I felt the players were magnificent. For me, my job is to manage and bring success to Celtic. I am proud to be here as manager and to bring a trophy to the people I love, to the club, to the support and the players.
“It’s a huge privilege to be the manager at Celtic and to have the first trophy with my own people is very special. It’s a really good feeling and I am delighted for everyone. It’s great for the confidence and sets us up very well. We have a huge job here to sustain this and build on it. But at this moment in time, after six months, it’s a great achievement. 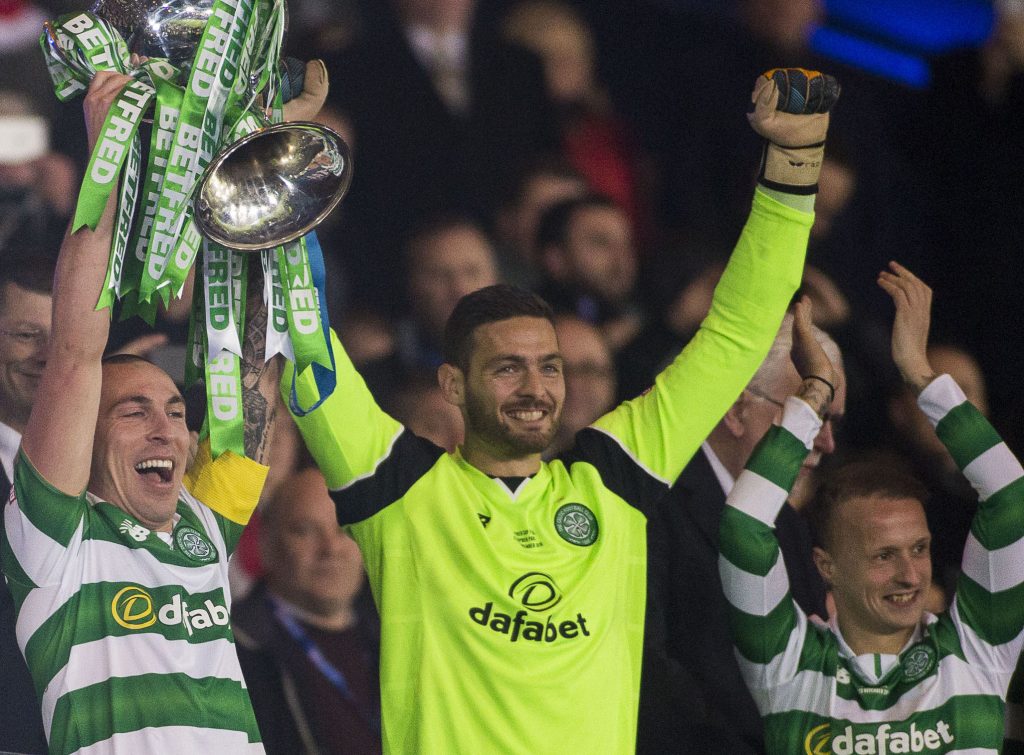 HAMPDEN HOORAYS…Scott Brown, Craig Gordon and Leigh Griffiths celebrate at the end.
“It was an outstanding performance. To play with that level of control and quality in a Cup Final, along with the players’ football ideas, was amazing. We scored three good goals and we always looked a threat in the game and, very importantly, the team defended very well, were aggressive and pressed the game at the right moments. Tactically, they played at a high level.
“We have had a lot of games following Champions League matches. Aberdeen had two games in thirty days and obviously had the full week to prepare. But if you look at the intensity and physicality of my team, it really demonstrates how hard and how well they are working on a day-to-day basis and how well they recover in games. What we are trying to achieve is an aggressive way of playing offensively.”
Gordon; Lustig, Simunovic, Sviatchenko, Izaguirre; Brown, Armstrong; Roberts (sub: Bitton), Rogic (sub: McGregor), Forrest (sub: Griffiths); Dembele. 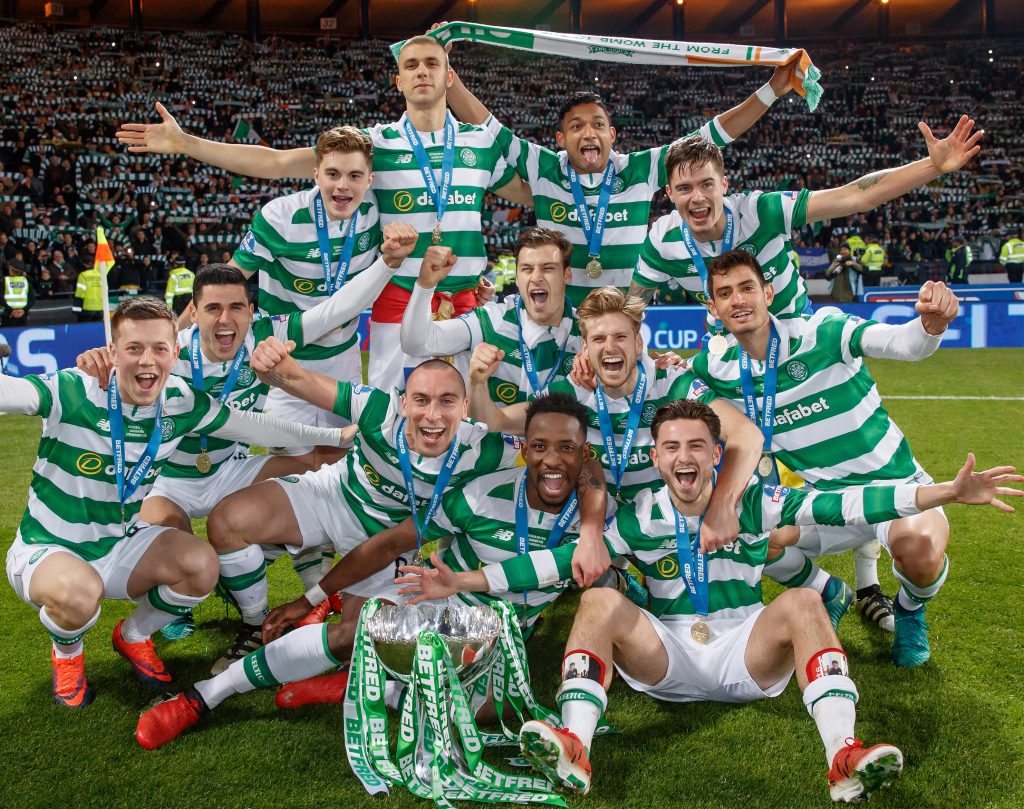