THE Celtic fans turned out in their thousands on the May day in 2016 when Brendan Rodgers was introduced as Ronny Deila’s successor.

It looked a perfect fit – a proven Celtic fan in charge of the Celtic team. What could go wrong? 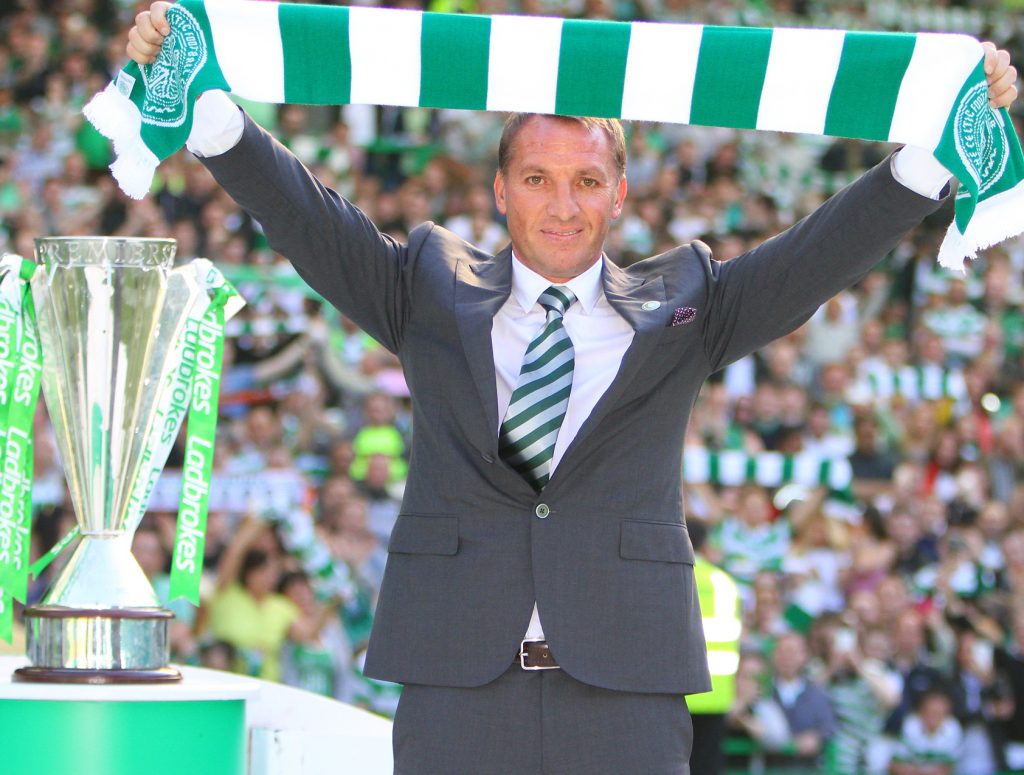 HOOP HOOP HOORAY…Brendan Rodgers displays the colours on day one at Celtic Park.

IT is inconceivable to imagine any of Celtic’s previous seventeen managers enduring a more excruciating competitive debut than Brendan Rodgers.

That was the preposterous, nonsensical scoreline that ricocheted around European football on the Tuesday evening of July 12, 2016. It was a result so implausible it was met everywhere with outright incredulity.

Semi-professional teams from Gibraltar should not beat the champions of Scotland. The local cop should not score the winning goal.

Off the top of my head, I can only think of The Titanic having a more disastrous first appearance.

It was not the voyage of discovery the new Parkhead boss would have envisaged or anticipated when he agreed to take over from Ronny Deila exactly fifty-two days beforehand.

The Norwegian’s two-year reign came to an end, mainly due to two unarguable factors: the abject failure of his team to respond to the challenge from an Ibrox side – one not competent enough to claim Premiership status – during a dismal Scottish Cup semi-final performance that ended in the ignominy of a penalty-kick shoot-out exit. And his indisputable inability to make an impression among Europe’s elite.

In the previous two campaigns, Deila demonstrated he did not have the quality or the nous to deal with the game at that level. In his first season, Celtic failed to reach the Champions League group stages when they lost 1-0 at home to the mediocre Slovenians of NK Maribor, toppling out on a 2-1 aggregate. And that followed a remarkable reprieve when it was discovered Poland’s Legia Warsaw had fielded an ineligible player – for only a couple of minutes – after they had coasted to a 6-1 aggregate triumph, winning home and away.

The following year, it was the turn of Malmo to end Celtic’s hopes following a tepid display in the second leg in Sweden. Celtic arrived with a 3-2 advantage and that was dismantled after two routine corner-kicks had created panic in the penalty box, the second decisive goal, somehow so typical of the lacklustre showing, bouncing into the net off Hoops defender Dedryck Boyata.

So, around thirteen thousand joyous supporters, with expectation levels soaring to new highs, went along to Celtic Park on the pivotal afternoon of May 20 to welcome the new manager, a professional who, unlike the rookie Deila, had proved himself at the top table.

In season 2013/14, the Irishman had come so close to guiding Liverpool to their first English title since 1990. In their wisdom, though, the club’s American owners decided to relieve their manager of his duties in October 2015, shortly after he had agreed a four-year extension.

A good friend of mine, a former top-class footballer, has always insisted the men who run football clubs wouldn’t know the difference between a ball and a banana. Who am I to disagree? 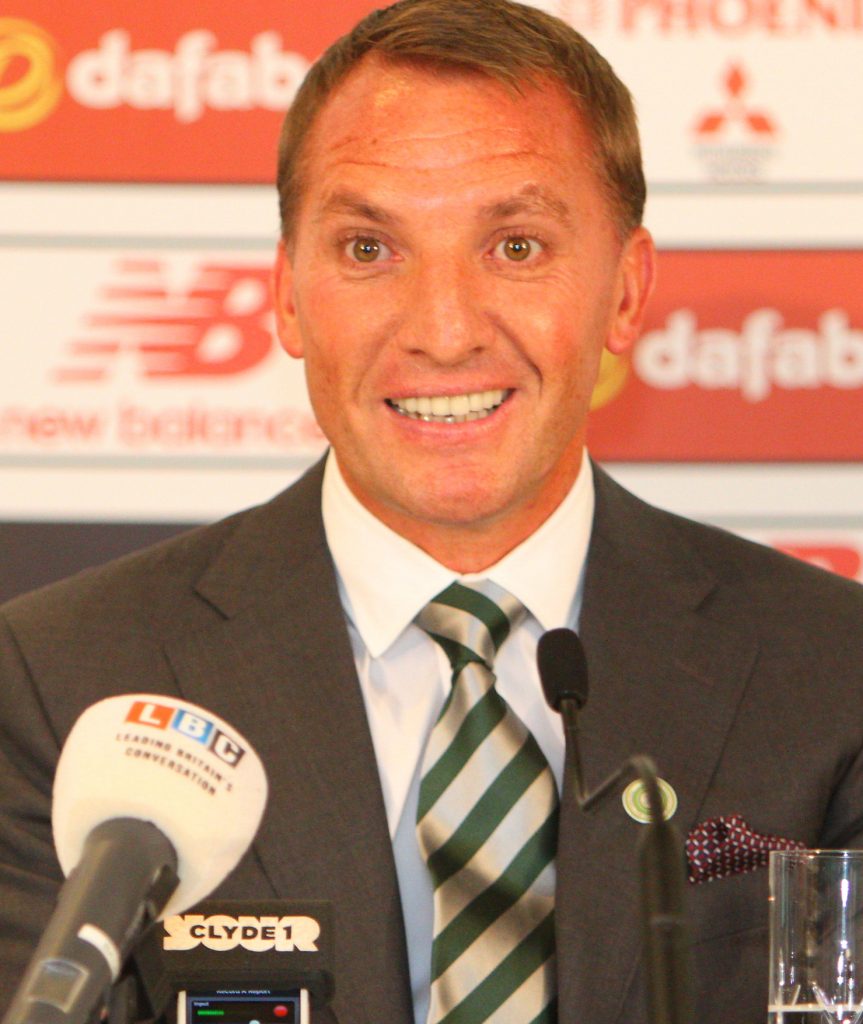 HELLO, BHOYS…Brendan Rodgers is introduced to the media at Celtic Park.

Hasty decisions in this game have a habit of having the same effect as a boomerang. Derby County once dispensed of the services of a a bloke called Brian Clough in 1973. Six years later, he won the first of back-to-back European Cups with Nottingham Forest. St Mirren sacked a young, progressive manager in 1978 and the Paisley club’s esteemed chairman, a chap by the name of Willie Todd, insisted the departing team boss had “no managerial ability”. He was discussing the merits of Sir Alex Ferguson, who was just a plain “mister” back then.

Brendan Rodgers wasn’t on soccer’s version of the scrapheap for too long. Parkhead chief executive Peter Lawwell interviewed the self-confessed Celtic supporter from the seaside village of Carnlough, County Antrim in Northern Ireland, for the vacant managerial post at the champions.

He arrived in the east end of Glasgow amid a fanfare from expectant fans. Rodgers won them over immediately. “I have been brought up with Celtic all my life, with my brothers, uncles and cousins all big supporters who still come to the games to this day, so I am fairly steeped in the tradition of Celtic and I’m obviously proud to be named as manager here.”

As far as the green and white-bedecked followers were concerned, the words could have been set to music.

“I remember my first Celtic game,” he continued. “It was 1984 and I was eleven years old when Celtic played Finn Harps in a friendly in Ireland. I will never forget that.

“When I was younger, because of safety concerns, my parents were reluctant to let me go over so much and it was only later on that I would come over and go to games. Whenever my father could take me, then he would do, but that was the first time I saw Celtic play live and it was a really special moment.

“It has been surreal, really. For a team I have supported all my life, to now be the manager is a humbling experience. I am privileged to be here.

“My family have taken it very emotionally. I have had brothers and uncles crying. For some of them, it was something they maybe hoped they would see in their lifetime. They weren’t sure if it would happen because predominately I have been based down in England and working in football there, but, for me, it was about coming to a massive club and there are too many bigger than Celtic.

“I have a great background knowledge of this club and it makes me very determined to do well here as I am following a historic line of managers including Jock Stein, Billy McNeill, Davie Hay and Tommy Burns, some outstanding Celtic legends, so I’m very honoured to be here and following in their footsteps.

“I am only the eighteenth manager in the history of the football club and you go through that list of names I grew up with all my life and to be able to take over and continue that work of the Celtic manager with the back drop of those legends is very humbling and very emotional, but also a great privilege.” 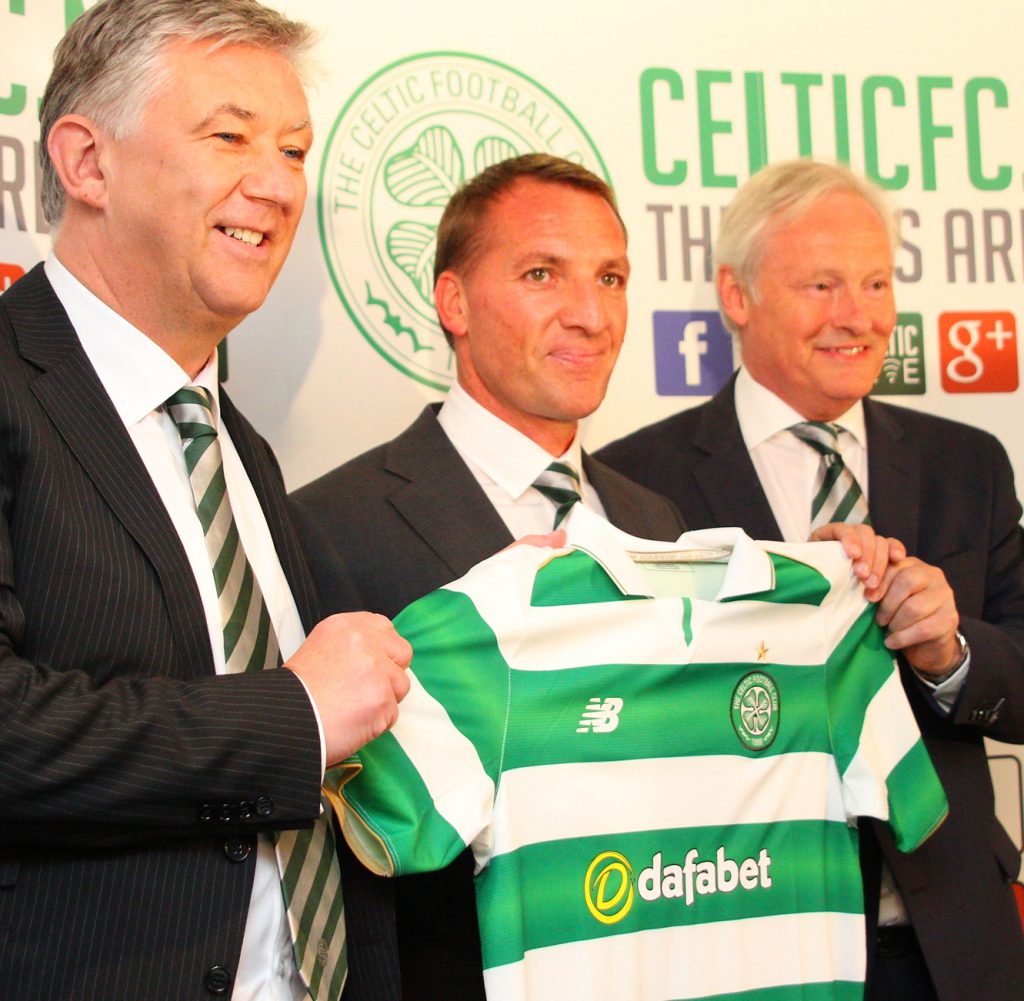 Rodgers realised only too well the awesome responsibility that had been placed upon his forty-four-year-old shoulders. He added: “For me, the objectives are pretty clear; to continue with the domination of Scottish football and also to make an impact in European football as this club is steeped in that tradition. You obviously go back to 1967 when Celtic became the first club from these islands to win the European Cup. There is a huge history here for the club in Europe.”

So far, so good for the Irishman. Until the forty-eighth minute of his initial competitive confrontation, the first leg of the Champions League second round qualifier. The tie was viewed as a potential banana skin. The shabby, unkempt artificial playing surface would prove to be a great leveller in terms of minimising the quality of the visiting players. The conditions were never going to favour Celtic. And so it proved.

In front of a meagre crowd of 1,632, the second-half was only three minutes old when Efe Ambrose misjudged a long ball down the middle into Celtic territory. It looked like a routine clearance. However, Lee Cascario, a thirty-four-year-old Ministry of Defence police officer, took advantage of the Nigerian defender’s fatal error and slid the ball beyond the exposed Craig Gordon. Leigh Griffiths twice struck the woodwork, but the face-saving equaliser wasn’t in this particular script.

Red Imps captain Roy Chipolina, a thirtysomething local Customs Officer, was in no mood to play down the achievement of the minnows. He declared delightedly: “This is the biggest shock in European footballing history.” It was difficult to mount a cogent argument.

However, the latest incumbent of the Celtic dug-out, at least proved he did not possess a panic button. While the world apparently collapsed around his ears, he said: “There’s no embarrassment,” adding: “It was a tough game in tough conditions.

“We dominated and had enough chances, but sometimes it can happen like that – one ball up the pitch and they’re in. They took their chance. You let the local team have their night, we press on, another week’s training and be better for it. It’s a two-legged affair and our objective is to get through. The message for our fans is to stay calm.”

A week later, 55,632 followers turned out on a balmy Glasgow evening to witness Celtic winning the second leg 3-0 with three quickfire goals in seven first-half minutes from Mikael Lustig, Leigh Griffiths and Patrick Roberts. The Champions League adventure was still on; commendably, the manager had never been in any doubt.

TOMORROW: Brendan Rodgers begins to put his stamp on the Celtic team.