BRENDAN RODGERS was one game away from making history as he took his place in the Hampden dug-out while Celtic prepared to play Aberdeen in the Scottish Cup Final on Saturday, May 27, 2017.

Today in the sixth and concluding part of CQN’s EXCLUSIVE extracts from Alex Gordon’s publication ‘CELTIC: The History Bhoys”, we report on that tumultuous occasion when the Irishman became only the third manager in the club’s annals of fame to achieve the domestic treble, following Jock Stein, who did it twice, and Martin O’Neill. 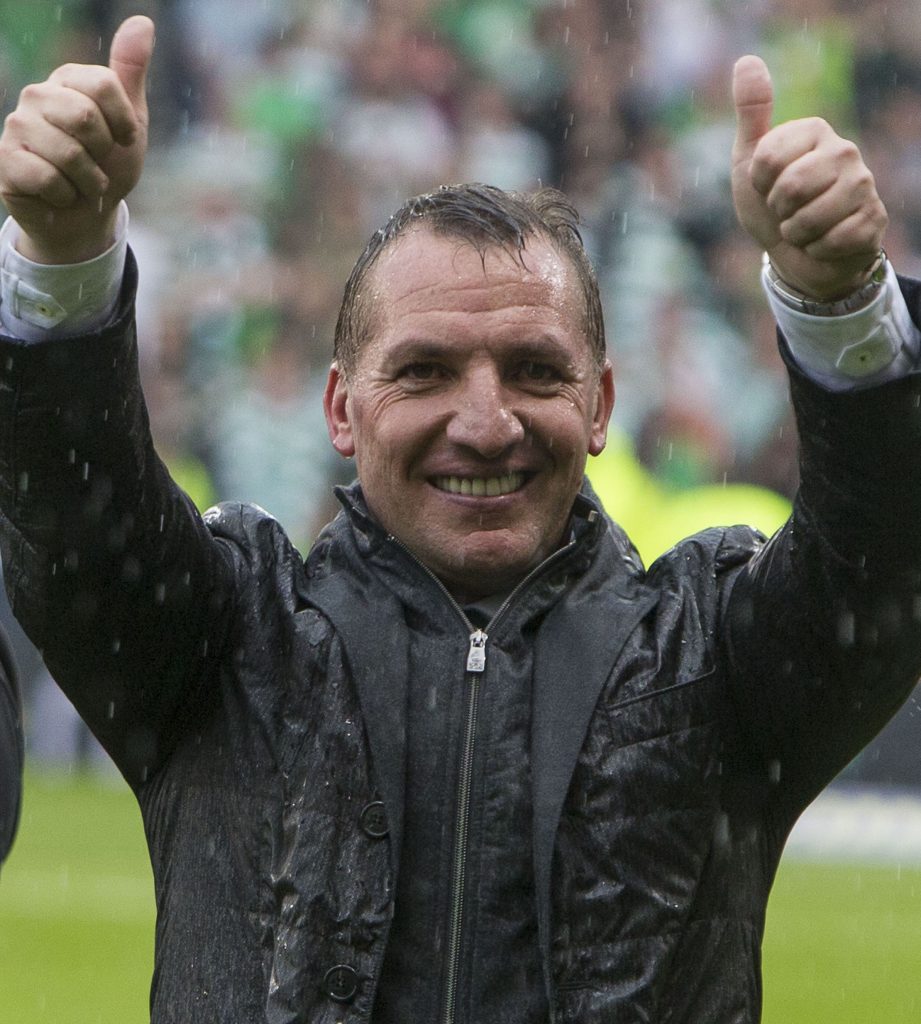 REIGNING IN THE RAIN…a delighted – and drenched – Brendan Rodgers after completing the silverware clean sweep.

BRENDAN RODGERS was standing drenched on the Hampden touchline while his all-conquering players cavorted on the pitch behind him to the strains of “You’ll Never Walk Alone”.

A goal deep in stoppage time by Tom Rogic had just beaten Aberdeen to give Celtic the Scottish Cup to complete the historic treble.

The Irishman practically snapped: “No!”

As the rain still swirled around the national stadium, Rodgers added: “We’ve created an identity this season and, hopefully, we can build on that and improve over the coming years. What we have achieved has been really spectacular.” 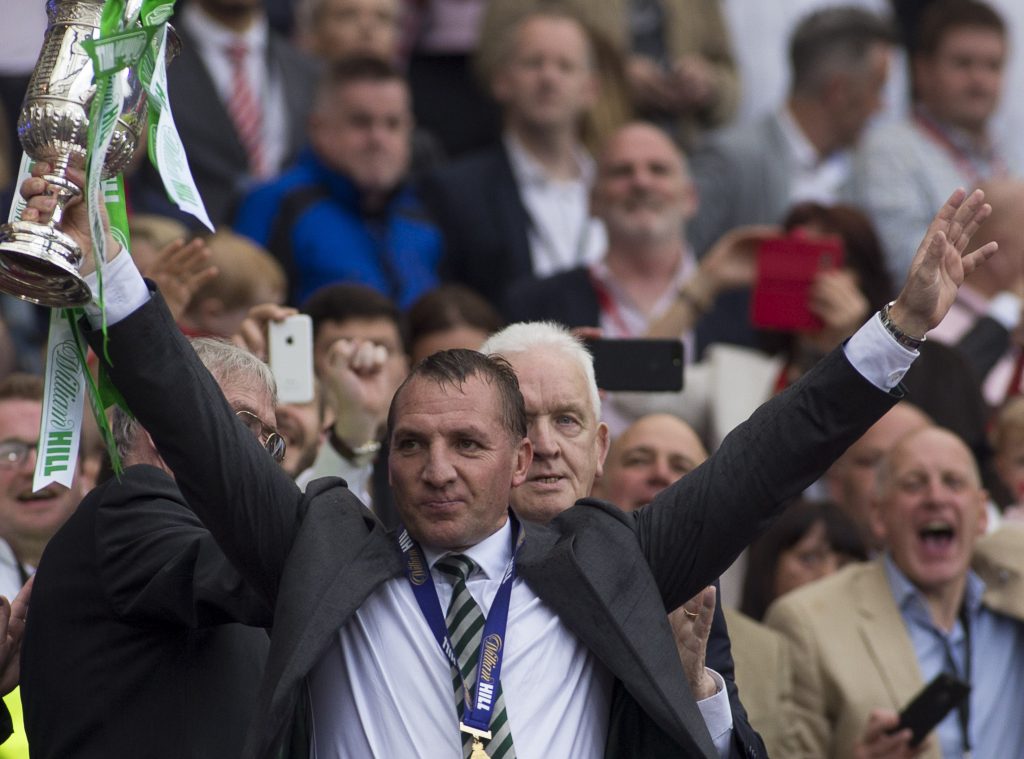 Rodgers also described the “special feeling” of emulating Jock Stein and Martin O’Neill after leading Celtic to the fourth treble in their history.

“Maybe the stars were aligned this year,” he smiled. ” I remember the centenary year for Celtic and there’s just a feeling about this season. But don’t get me wrong, we’ve had to earn it. We’ve worked hard.

“It’s a huge honour. I think what the players have achieved and you see how difficult it is, the great history of this club and the great managers and players who have been here before me.

“To have achieved that in the first season, along with everything else that we’ve done is very humbling.

“I still get a wee bit of a funny feeling, it doesn’t sit quite right with me. Jock was a real pioneer in leading the club where they wanted to go. Martin did an incredible job here.

“History will judge me and I’ve only just begun, so when I leave here people will look at what I did. It’s been truly enjoyable. It’s a really special feeling today.” 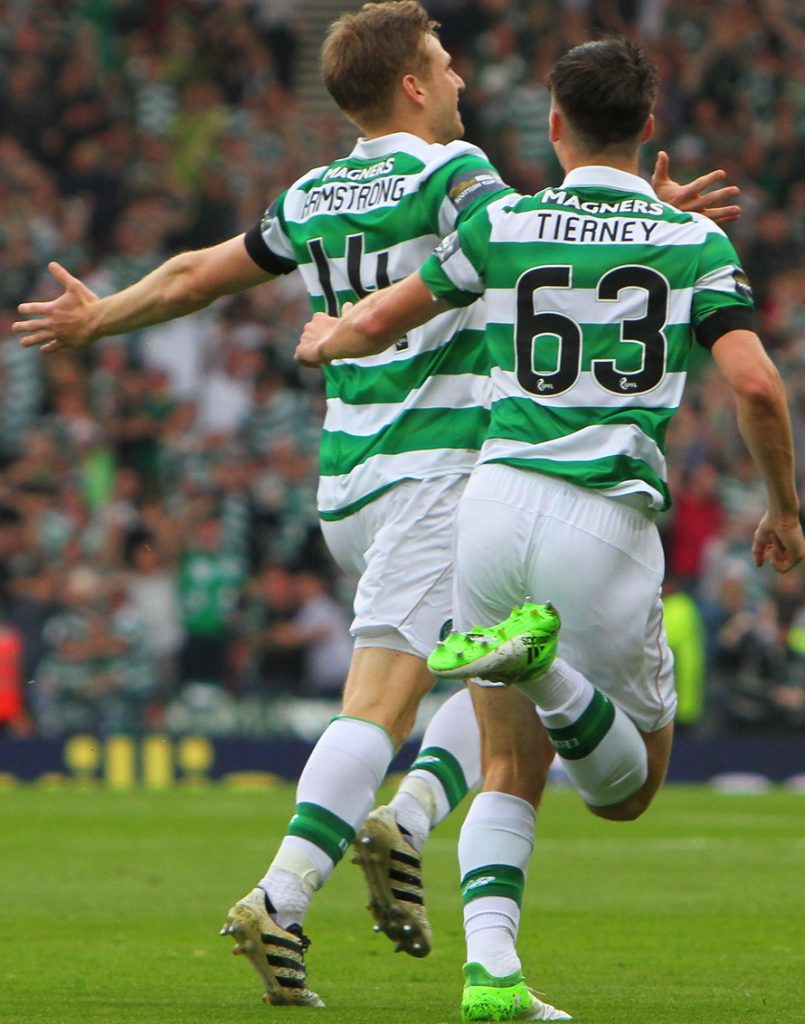 THE EQUALISER…Stuart Armstrong is about to be congratulated by Kieran Tierney after rifling in the Hoops’ quick response.

A dramatic 2016/17 campaign was edging to a shuddering climax with Celtic and Aberdeen locked at 1-1 in the Scottish Cup Final on a day of crazy changeable weather conditions in Mount Florida on the Saturday afternoon of May 27, 2017.

The champions had been rocked when the Pittodrie outfit had taken the lead through an effort from Jonny Hayes, but, thankfully, Stuart Armstrong had the perfect response with the leveller just over a minute later, a low left-foot drive from the edge of the box that zipped beyond the desperately diving Joe Lewis.

Two minutes into stoppage time, the scoreline hadn’t changed – until a moment of magic from the man known as the Wizard of Oz, Tom Rogic. No danger threatened as he picked up a pass from Stuart Armstrong and ambled forward. There was a spurt of acceleration to leave Anthony O’Connor in his slipstream. 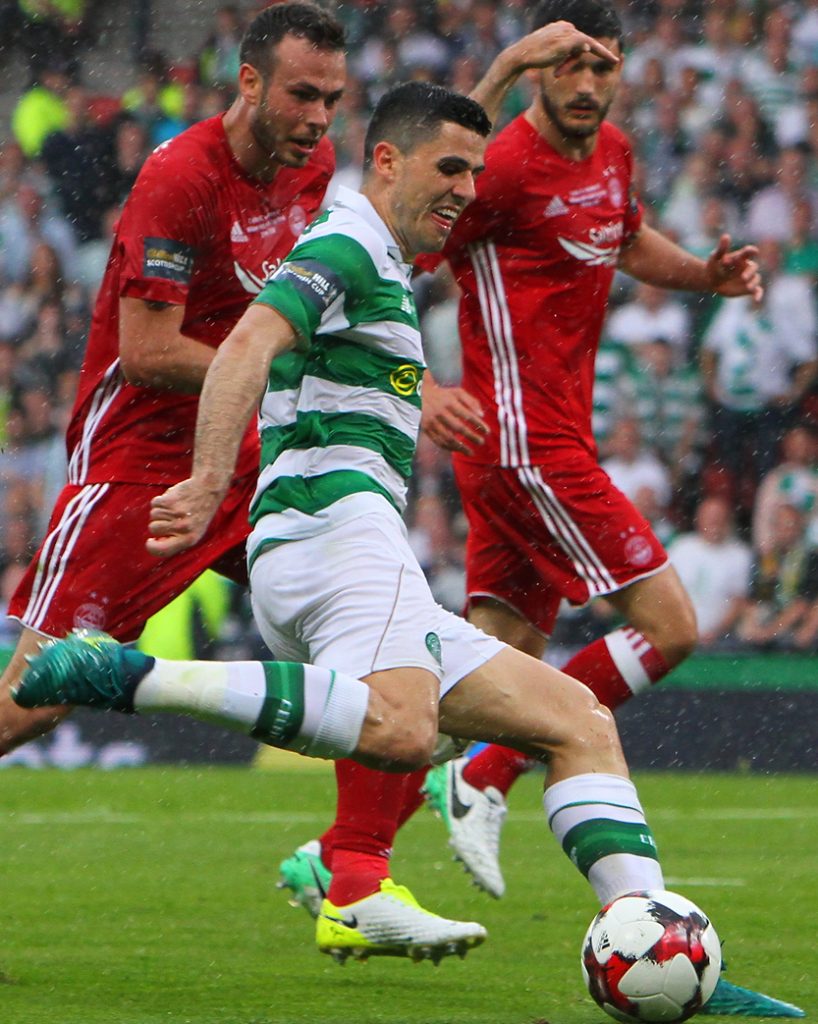 ONE KICK FROM GLORY…Tom Rogic is poised to deliver the Scottish Cup-winning goal. 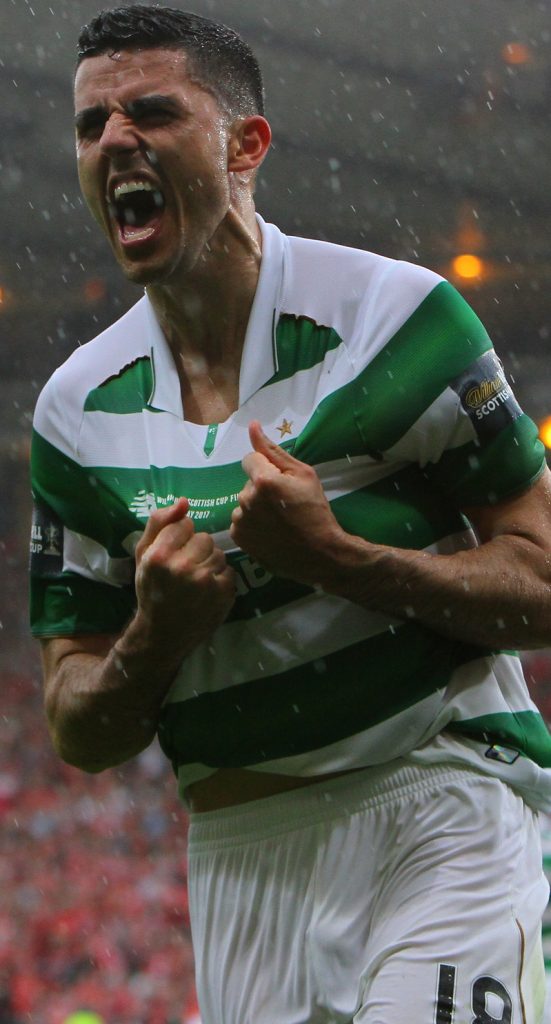 OZ-SOME…Tom Rogic can’t contain his joy as he turns away after scoring the last-gasp winner.

Menacingly, Rogic carried into the penalty area, a shimmy one way and then another bamboozled Andy Considine before the Aussie playmaker spotted a space between the keeper and his near post. With a nonchalant sweep of his right foot he tucked the ball sweetly into the net.

About a minute later, referee Bobby Madden blew his whistle for time-up and the Scottish Cup was on its way to the east end of Glasgow to keep the Premiership and the League Cup company in the Celtic Park trophy cabinet.

History had been made with virtually the last kick of the ball. 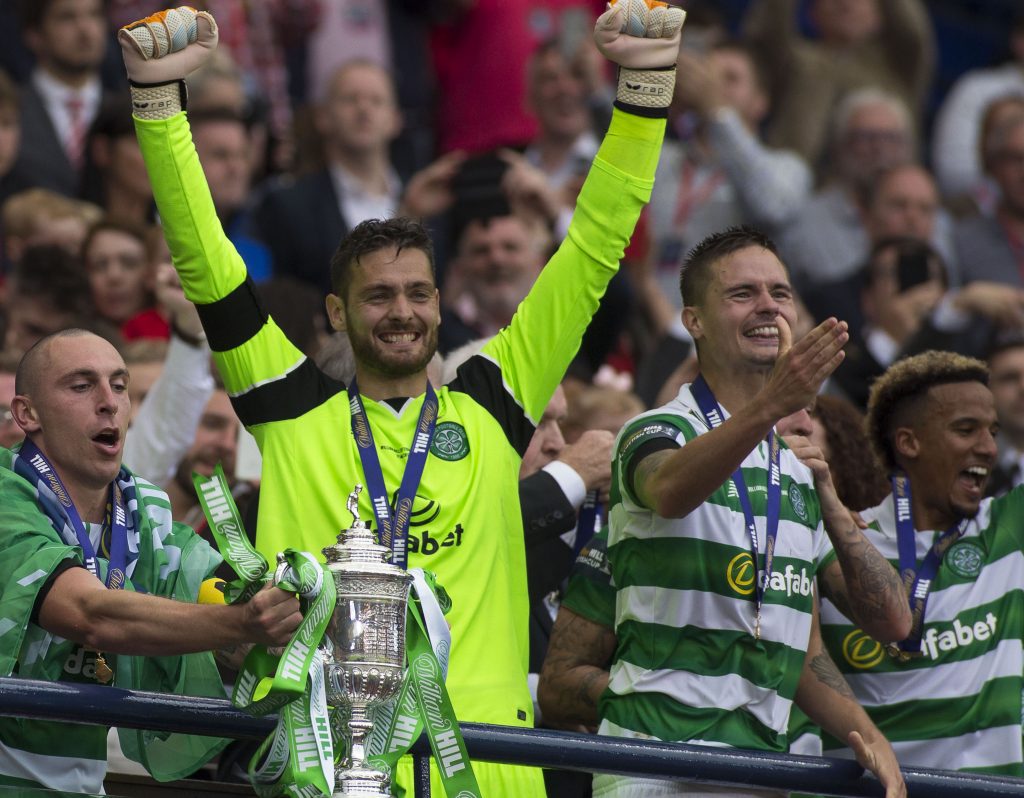 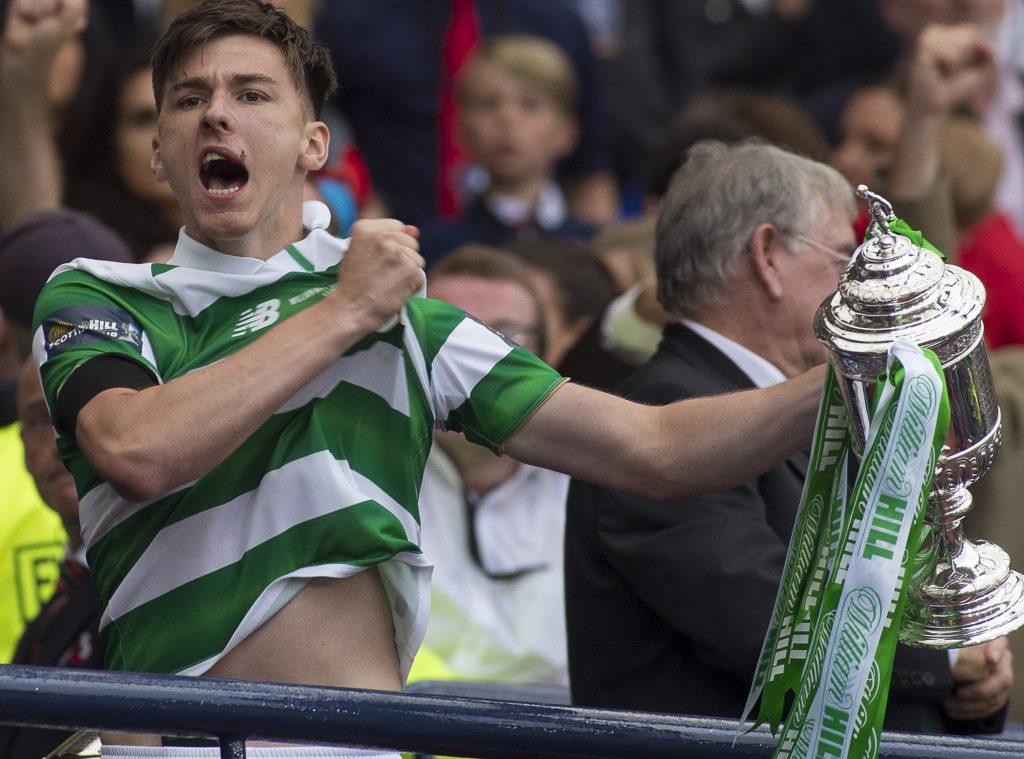 KIERAN THE BRAVE…Celtic’s young defender Kieran Tierney, taken off with a facial injury in the first-half, shows his emotion at the end. 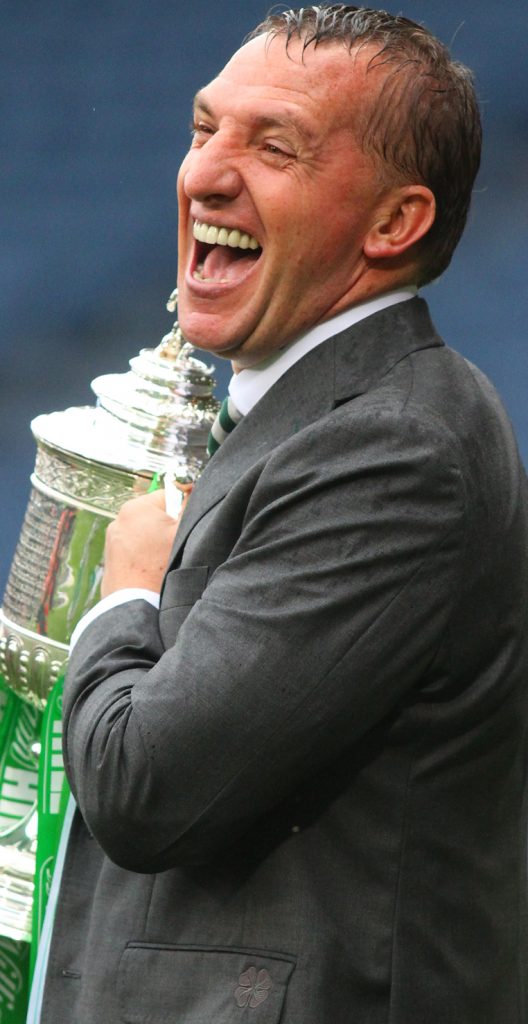 HOORAY…Brendan Rodgers with the glittering prize.

* DON’T miss the EXCLUSIVE extracts from Alex Gordon’s ‘CELTIC: The History Bhoys Extra’ which charts Brendan Rodgers’ colossal record-breaking double-treble season as Celtic manager in the 2017/18 campaign. Look out for it – only in your champion CQN.