Today, in Part Nine of CQN’s EXCLUSIVE extracts of Alex Gordon’s publication, ‘CELTIC: The History Bhoys’, we report on a that season’s remarkable

THIS was a day in history when smart observers claimed Celtic won TWO trophies on the same afternoon. A sizzling hat-trick from Bobby Lennox helped his team dismantle their Edinburgh opponents on a gloriously sunny afternoon at Hampden Park.

Elsewhere, though, a result emerged that virtually handed the Parkhead side their fourth successive First Division championship to sit nicely with their fourth League Cup on the bounce. Nearest challengers Rangers collapsed to a 2-1 upset against Dundee United at Tannadice and, while it’s true the Ibrox side’s loss went a long way to guaranteeing Celtic the crown yet again, the title was not finally settled until the 2-2 draw with Kilmarnock at Rugby Park on April 21.

Two league games later after the dust had settled on another exhilarating campaign, Jock Stein’s side sat comfortably in pole position with fifty-four points from thirty-four games, five more than their Ibrox rivals.

The only thing on the Celtic manager’s mind on April 5, though, was the League Cup confrontation against an Easter Road side that had eked out a 1-1 draw in Glasgow the previous month. Hibs were the chameleons of Scottish football. One week, awesome; the next, awful. They would complete the league season in joint twelfth place alongside Clyde. Remarkably, considering their playing resources, they lost fifteen games.

And yet they could point to quality players among their ranks such as reliable goalkeeper Thomson Allan, who would go to the 1974 World Cup Finals as the Scotland back-up to David Harvey, Pat Stanton, who would enjoy an Indian Summer at Parkhead, John Blackley, an international defender, astute midfielder Peter Cormack, who would go onto play for Liverpool, and snake-hipped winger Peter Marinello, who, only nine months later, joined Arsenal for £100,000, a phenomenal amount for a Scottish player at the time.

For twenty-three minutes they kept an eager Celtic side at bay. Inside an hour, though, they had conceded six goals and were in football’s equivalent of hell. Willie Wallace drew first blood when Bertie Auld, with his usual precision, curled a free-kick into the penalty area. Stanton managed to head clear, but the ball dropped stright at the feet of Wallace who rattled it through a ruck of players and beyond the reach of Allan. 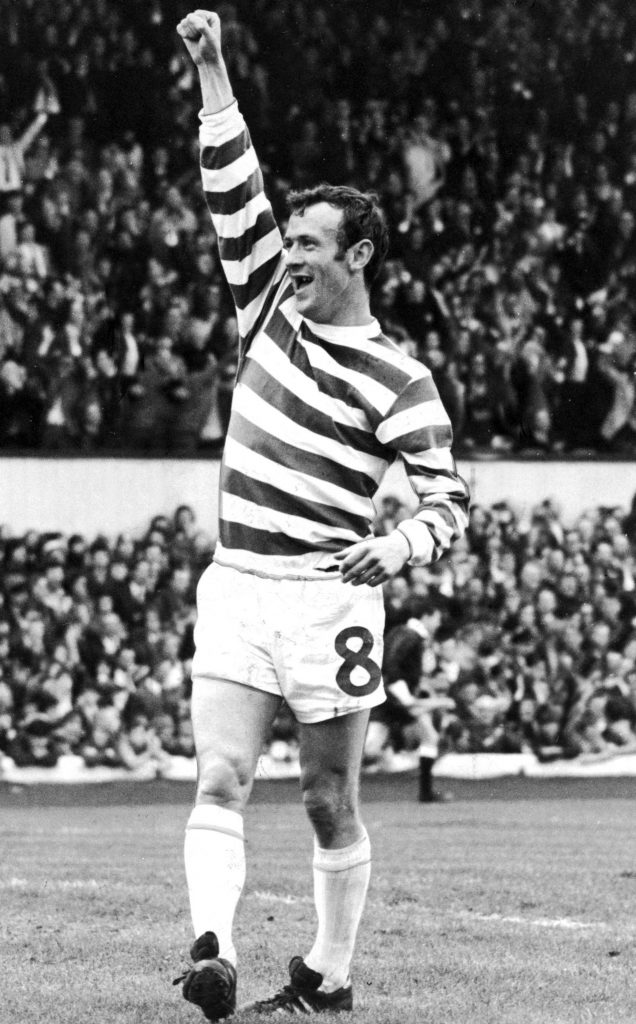 Auld was enjoying the occasion as he strutted around the immaculate playing surface, spraying passes hither and yon as he probed for weaknesses in his opponents’ defence. Not content with exploiting the gaps for his team-mates, the masterful Auld decided to add his name to the scoresheet. On the half-hour mark, he released Stevie Chalmers who scurried down the left before pitching over a teasing cross. Auld struck it first time with his left foot and the next time Allan saw the ball was when he was fishing it from the back of his net.

The Hibs players were looking forward to the sanctuary of their dressing room at half-time when lightning-swift Lennox struck for the third goal. Nothing could have been simpler. Jimmy Johnstone zipped in a right-wing corner-kick to the near-post and Lennox bolted in ahead of the massed ranks to get the merest of touches with his head to glide the ball away from an open-mouthed Allan. Was there any point in restarting the game for the second period? Hibs, as everyone in the 74,240 crowd would surely have atested, were a beaten team.

Thirteen minutes after the turnaround, Auld split the Edinburgh side’s back lot and Lennox – “I’m convinced he was born fast,” Danny McGrain was fond of saying – waltzed onto the pass, leaving gasping defenders in his slipstream, and drew Allan from his line before stroking the ball into the vacant net. If it had been a boxing match, the referee would have put the Edinburgh players out of their misery. No such luck in this particular sport, however. Celtic continued the trek towards Allan, who must have wondered about the wisdom of becoming a netminder.

Lennox completed his trio in the seventy-third minute and Jim Craig, who scored goals with the regularity of sighting of Hally’s Comet, slotted in the sixth goal from a tight angle. Jock Stein decided to give John Clark some exercise and sent him on for Tommy Gemmell. The defender’s arrival coincided with two late goals from Hibs, Jimmy O’Rourke netting in the eighty-second minute and Eric Stevenson five minutes later. Apparently, Clark didn’t even blush as he picked up his winner’s medal.

The game had been due to take place in October, but had to be delayed because of a fire in the Hampden stand. Three weeks later, Celtic would return to the national stadium to take on Rangers in the Scottish Cup Final.

Who would have bet on another four-goal winning margin for Jock Stein’s team?

* TOMORROW: Rangers are routed in a landslide Scottish Cup Final victory as Jock Stein’s unstoppable side have their rivals beaten before half-time.