MARTIN O’NEILL was one triumph away from his first silverware success as Celtic manager when the Hoops faced Kilmarnock in the League Cup Final at Hampden on March 18, 2001.

It was to turn out to be a dramatic confrontation – but one man stole the show with a breathtaking performance to make certain Irish eyes were smiling at the national stadium that afternoon.

THERE was no surprise this League Cup triumph was named ‘The Larsson Final’ following a mesmeric performance from the spellbinding Swedish striker.

The 48,831 spectators at Hampden were simply left in a state of hypnosis as Henrik Larsson magically produced a devastating second-half display of ruthless finishing to flash in a hat-trick to lift his season’s goal tally to a remarkable forty-seven while despatching the Ayrshire team to also-ran status.

Kille couldn’t say they weren’t well warned about the menace of Larsson. Two days into 2001, they were first-foots to Parkhead on league business and were demoralised 6-0 with the elusive marksman claiming four and Chris Sutton adding the two others. The Celtic double-act would sample contrasting fortunes in this Hampden Final.

It was stalemated at the interval with a rugged Killie outfit refusing to give their opponents – especially Larsson – space in which to operate. Their tackling was robust, to say the least, and Bobby Petta’s time on the pitch didn’t go beyond the tenth minute when he was forced to limp off after a sturdy challenge from Alan Mahood. Substitute Stephen Crainey took the Dutchman’s place on the left-hand side of the midfield five.

For most of the opening forty-five minutes, it was raw fare for the fans. No quarter was asked or given by two sets of players with their eye on the prize. At this stage of the campaign, no-one at Celtic was talking about the possibility of the third clean sweep in the club’s history. But the players and the club’s followers were allowed to dream.

Following the cat-and-mouse tactics of the first-half, it was evident the only way Martin O’Neill’s men could entice their opponents out of their defensive shell was to score a goal which would compel them to ditch the safety-first outlook. That man Larsson duly obliged. Only two minutes after the turnaround, Celtic won a corner-kick when Gordon Marshall pushed away a shot from young Colin Healy, playing instead of the suspended Jackie McNamara. A short one was touched to Lubomir Moravcik on the right and he curled over an inviting cross. Ramon Vega diverted the ball to Larsson and he had to readjust his body shape in an instant as he acrobatically volleyed a close-range effort into the net. 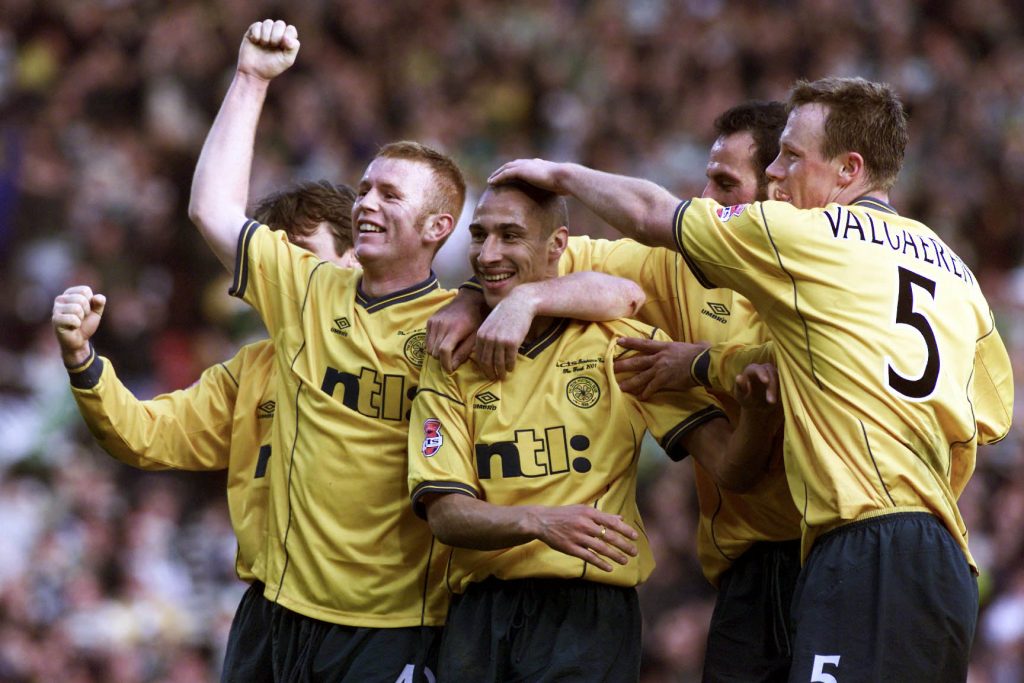 SWEDE DREAMS…Henrik Larsson is mobbed by jubilant team-mates after his Hampden masterclass.

Celtic fans waited for the floodgates to open, but there was a moment of high drama when Sutton was issued with a straight red card by referee Hugh Dallas following a challenge on Gary Holt. It looked harsh and O’Neill, after watching the incident again on TV monitors at the ground, was disinclined to agree with the match official’s judgement and observed: “A yellow card might have been enough.”

In the seventy-fourth minute, Larsson sparked to life again. Moravcik spotted his team-mate racing free on the right and picked him out with an impeccable through pass. Larsson summed up the situation in a heartbeat and stroked the ball towards goal from an angle. It took a touch of frantic defeneder Chris Innes and spun high over the head of keeper Marshall.

Nine minutes from time, the Swede sprinkled some more stardust over the proceedings. Picking up the ball a few yards inside Killie’s half, he simply darted towards Marshall’s goal. Kevin Gowne was left in his stripstream as Larsson zeroed in on his quarry. Anxiously, the Rugby Park No.1 left his goal only to be left in an undignified heap as the masterly Celt went one way and then another before rolling a left-foot effort home to be greeted with the Parkhead followers’ version of the Hampden Roar.

Martin O’Neill smiled: “I’ve almost run out of things to say about Henrik – he is a fantastic player. He would score goals in any league in the world and that last one would have graced any Cup Final on any stage. He’s my kind of player, that’s for sure. In fact, he would be the best manager in the world’s type of player.”

The final word must, of course, go to Henrik Larsson. “The fact we survived with ten men and got stronger shows how much character we have in this side. It was difficult, but we fought for each others and that’s why we won 3-0. Martin O’Neill has made the whole team want the ball – no-one is afraid. That is what he has given us. Our self-confidence is back and you need that.”

Henrik Larsson and Martin O’Neill, a marriage made in Paradise.

TOMORROW: Hampden in the sun as Celtic face Hibs in the Scottish Cup Final.