CELTIC had to do something dramatic to force their way out of a painful downward spiral – enter Martin O’Neill in the summer of 2000.

Today, in Part One of CQN’s EXCLUSIVE extracts from Alex Gordon’s publication, ‘CELTIC: The History Bhoys’, we turn the spotlight on the new manager who was about to follow in the footsteps of the legendary Jock Stein and deliver a clean sweep of domestic honours for only the third time in the annals of club fame.

HOOP HOOP HOORAY…Martin O’Neill jumps for joy in the 6-2 win over Rangers.

WITHOUT blinking, Martin O’Neill looked at his would-be inquisitors and declared: “Just to be absolutely sure about this, I want you all to know that I bear a grudge. No, I’m not joking. Seriously, I do bear grudges. Honestly, I do.”

The new Celtic manager had put down a marker without a ball being kicked in anger.

I was part of the media scrum who had been invited to meet the Irishman at the Crutherland Hotel, nestling amid a gorgeous riot of assorted colours in gardens on the way to East Kilbride, on a gloriously sunny afternoon in June 2000.

About twenty other sports journalists had been given the opportunity to meet and greet the incoming team boss for the first time.

O’Neill had just handed in his notice at Leicester City and was addressing a dining room packed with strangers.

I sat opposite him for an hour or so that day and got the drift he was not an individual who embraced mirth with effortless ease. As a matter of fact, the man who was following in the footsteps of the legendary Jock Stein appeared to be solemn and withdrawn and made little effort to indulge in idle chit-chat.

When it came to coffee and liqueurs, the team boss given the urgent task of breathing life into a team that had been knocked out of the Scottish Cup by Inverness Caley Thistle the previous season moved to the top of the table to grab everyone’s attention.

He went through the usual preamble; “Big club, big job, big test.” Once he had got the formalities out of the way, the real Martin O’Neill took over and he had no intention of leaving anyone in that room in any shadow of doubt about what he expected in the coming years while he was manager of “one of the greatest football clubs in the world”.

He wasn’t just talking about his players, either. No member of the press left the Crutherland Hotel that day with any uncertainty about what to expect from the latest incumbent of the Parkhead dug-out.

“Cross me and you’re in trouble.” It was loud and clear. Celtic had just appointed a single-minded, fiercely-committed individual who would stand or fall by his harshest decisions. 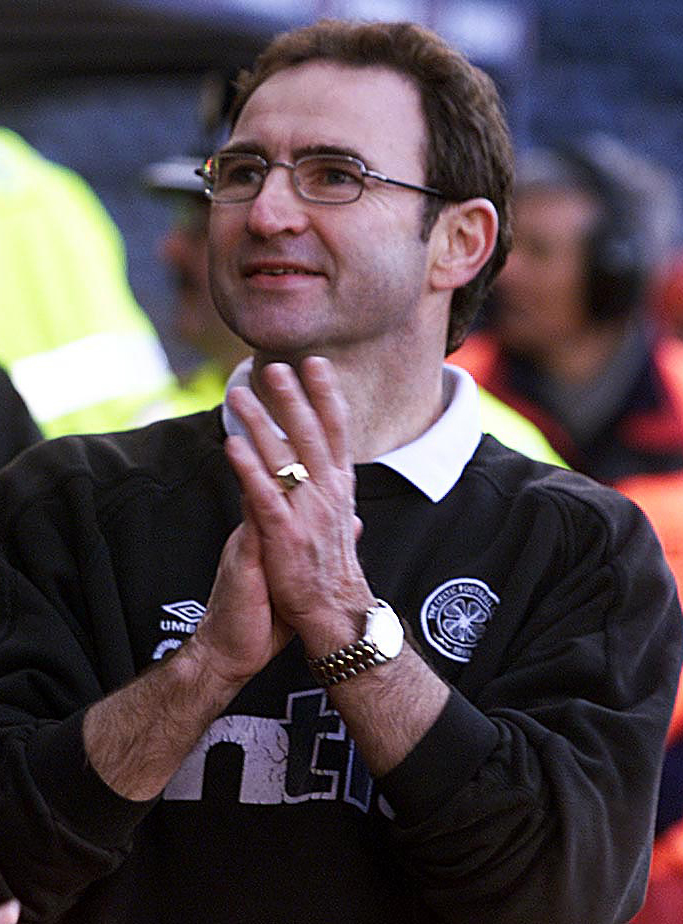 A BIG HAND FOR MARTIN…the Celtic boss is ready for action.

O’Neill, of course, answered an SOS from Celtic that summer. The previous year’s experiment with John Barnes as a rookie manager and Kenny Dalglish as Director of Football Operations had gone catastrophically wrong. The partnership looked good on paper, but, unfortunately, didn’t transfer to where it mattered most – the football pitch.

The catalyst was the pulverising defeat from the Highlanders in the Scottish Cup on a raw, piercing evening in the east end of Glasgow when Barnes lost control of his team as they toppled to one of the most embarrassing results in the club’s history. There was turmoil in the dressing room at half-time with Celtic trailing 2-1.

Mark Viduka, the club’s Australian striker, in the midst of an extravagant temper tantrum, removed his boots and threw them across the dressing room. The shirt followed the footwear moments later. He had no intention of taking any further part in the shambles.

Barnes – with Dalglish out of the country – looked for support. There was none. English veteran forward Ian Wright took Viduka’s place for the second-half and the rest, as they say, is history. The Highlanders, thought to be there to simply make up the numbers, added a third goal in their wondrous 3-1 success.

A couple of days later, Barnes was sacked. He had arrived in June 1999 and left in February 2000, heading for managerial oblivion. Dalglish took the charge of the team until the end of the campaign and, remarkably, led them to a League Cup triumph, beating Aberdeen 2-0 in the Final.

The Parkhead men actually claimed runners-up spot in the Premier League, a landslide twenty-one points adrift of Rangers, who, unchallenged, cantered to their eleventh title success in twelve years.

Dalglish still had 12 months to run on a contract worth around £600,000 per year. His days were numbered, though, when O’Neill was offered the manager’s job. There was not the remotest possibility of O’Neill and Dalglish working together. Dalglish would eventually take the club to the Court of Sessions in Edinburgh accusing them of unfair dismissal. Figures ranging from £750,000 to £1.2million were bandied about before the sorry, messy situation was rectified.

Another problem had to be resolved, too. There was the small matter of O’Neill having already agreed a three-year extension to his Leicester City deal in June 1999, reputedly worth £600,000 a year, matching Dalglish’s salary at Parkhead.