MARTIN O’NEILL wasn’t slow to splash the cash as he made his entrance at Celtic in preparation for the 2000/01 campaign.

Today, in Part Two of CQN’s EXCLUSIVE extracts from Alex Gordon’s publication, ‘CELTIC: The History Bhoys’, we look at how the Irishman settled in so quickly to the Parkhead dug-out.

BY the summer of 2000, Martin O’Neill had been team boss of Leicester City for five years following his dug-out debut with non-league Wycombe Wanderers in 1990 and moving on for a brief stint at Norwich City in June 1995. The headstrong character from the village of Kilrea, in Northern Ireland, had a disagreement with chairman Robert Chase over transfer policy and resigned six months later.

He joined the West Midlands side immediately after leaving the East Anglian club. He guided the team – then based at Filbert Street with a ground capacity of 22,000 – to the Premier League in his first season. He also led the side to two League Cup Final successes and it wasn’t long before clubs with superior financial resources were looking in his direction. O’Neill, bright and astute, triggered his release from his Leicester City contract after exercising a clause that allowed him, during the close season, to speak to clubs interested in obtaining his services. Celtic acted in haste to take up that option.

And, so, on a particularly wet afternoon in the east end of Glasgow, O’Neill, unflinchingly made his way to the dias at the front door at Celtic Park on the unseasonal first day of June and, holding up his left hand to acknowledge the cheers of his new admirers, he had a few words for the gathering throng.

O’Neill said: “First of all, thank you very much for waiting in the rain. I really appreciate it.” He paused, waved again and continued: “It’s an absolute honour for me to be the manager here, I’m telling you that now. It’s an absolute honour.” He stepped back as the rapturous applause gathered momentum.

He signed off: “I will do everything I possibly can to bring some success here to the football club. Thank you.” And with that the fourteenth full-time manager in Celtic history disappeared back into the labyrinth of his new football home where he would rule for five extremely interesting years.

O’Neill would be working again with John Robertson, his former Nottingham Forest team-mate who was also his assistant at Wycombe, Norwich and Leicester, and Steve Walford, his Head Coach at Carrow Road and Filbert Street. O’Neill extended Tommy Burns’ emergency contract from the previous season to coach alongside Walford. Burns didn’t need any persuading to agree the deal.

You better believe O’Neill would have had the inside track of the histrionics in the home dressing room during the shameful evening of the Caley Thistle debacle.

The intransigent Viduka had made noises about wanting to move and he got his wish when he was transferred swiftly to Leeds United for £6million and the new Celtic manager quickly passed that same amount of cash to Chelsea for Chris Sutton, a direct and more robust replacement for the man from Down Under, who could often mix brilliance with belligerence. 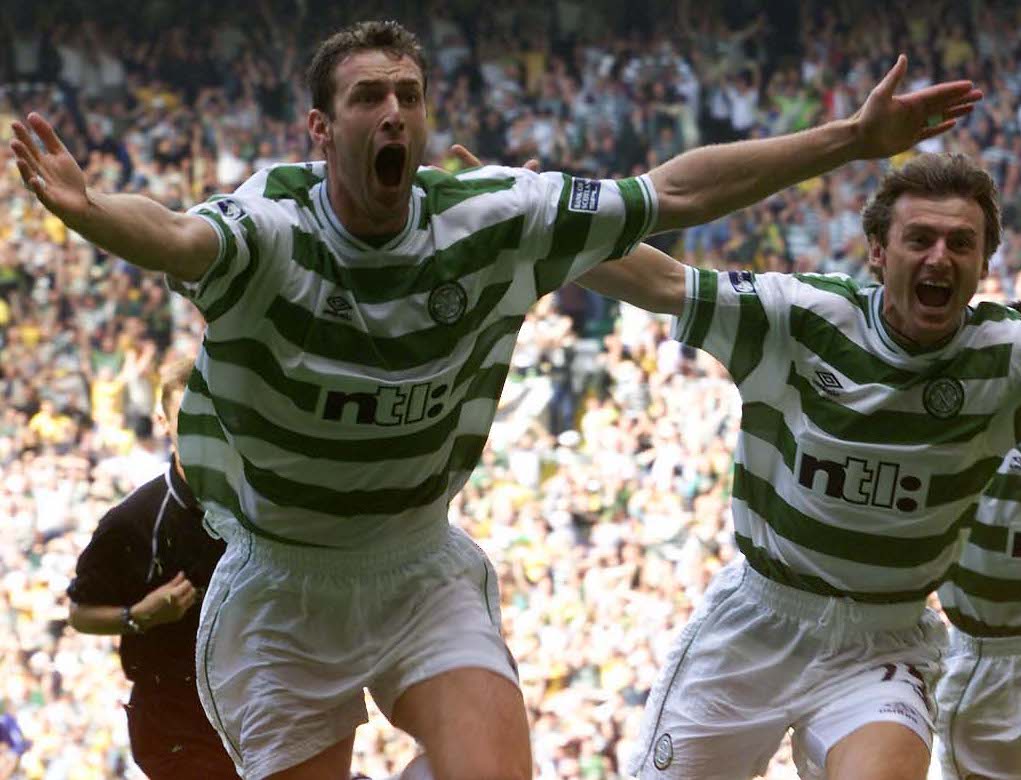 OVERNIGHT SENSATION…Chris Sutton was an immediate hit with the Celtic support.

Sutton became an instant hero with the Parkhead faithful. After completing the signing, he said: “I know the expectations of the Celtic fans. That’s to win the league and put Rangers in their place.” Sharp and succinct, the words of a winner.

O’Neill, with the backing of major shareholder Dermot Desmond, wasn’t hanging about in the transfer market as he strengthened his inherited squad. He didn’t hesitate in parting with £3.8million to Dutch outfit Roda for Belgian international defender Joos Valgaeren.

Astute left-sided midfielder Alan Thompson arrived in a £2.8million deal from Aston Villa while French winger Didier Agathe, daubed the Bhoy Racer for obvious reasons as he scorched up and down the touchline, was brought in for a nominal £200,000 from Hibs where he was coming to the end of his short-term deal with the Easter Road club.

In October, Dundee keeper Rab Douglas agreed a £1.2million switch to Parkhead – knocking back interest from Rangers in the process – and O’Neill finally landed his Leicester City protege Neil Lennon in December for £6million after months of tracking his former skipper.

While he was putting his squad together, there were a few who did not impress O’Neill, one being expensive defender Rafael Scheidt who had arrived in Scotland on a reported £4.5million transfer fee from South American outfit Gremio.

O’Neill made his mind up about the bungling Brazilian after only a few minutes of seeing him in action in a pre-season game in Ireland, a 3-2 win over Bray Wanderers. The centre-half, with time and space, elected to shell a ball down the wing and, in doing so, almost decapitated the new Celtic boss who had to swiftly duck as the hurtling object sizzled over his head and into the unfortunate fans behind the dug-out.

A loan deal was put in place post-haste to take Scheidt back to Brazil with Corinthians for a year. The player had an interesting take on his days in Glasgow. He told South American journalists: “I have left the hell that has been unbearable for me. I have suffered a massive process of rejection. Football is ping-pong with the ball going back and forward. Martin O’Neill has told me he thinks I am not good enough to play for Celtic. He told me to tackle harder, to fight for every single ball and to elbow my opponents. I told him I couldn’t do that and he thought I never followed his instructions.”

O’Neill later admitted to being “completely baffled” at the thought of anyone spending any amount of cash on the only Brazilian player he had ever witnessed who couldn’t control and pass the ball. The defender’s temporary transfer with Corinithians was extended for a further season and he said he wanted to return to Celtic after that period to show his real qualities.

Choosing his words as carefully as he picked his passes, the South American was quoted as saying: “I want the year to be known as the Scheidt year”.

TOMORROW: Six of the Best: The pick of the bunch as Martin O’Neill signalled his arrival at Parkhead in spectacular style.