JOE HART has paid his tribute to the extraordinary impact Kyogo Furuhashi has had on Celtic – one and off the field.

The 34-year-old 75 times-capped England international keeper saluted the finishing skills of the Japanese striker who hoisted his goal tally to 16 with his two devastating strikes in the 2-1 Premier Sports League Cup Final triumph over Hibs on Sunday.

The experienced Hart, who won five major honours in his time at Manchester City, admitted he is “very proud” to have enjoyed “a really special” moment” with the Hoops support at Hampden after three seasons in virtual obscurity at Burnley and Spurs. 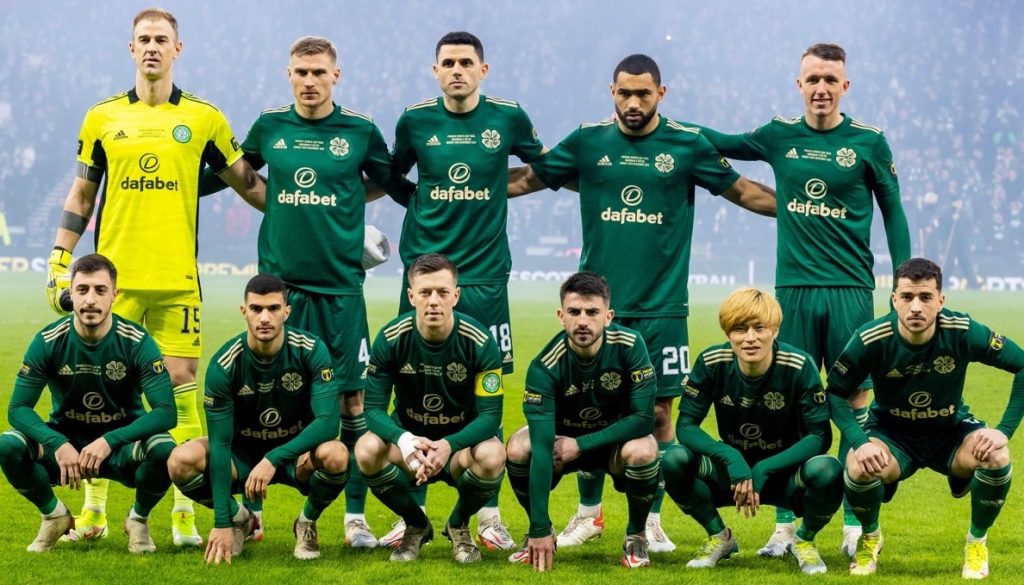 There may be a language barrier between Kyogo and his Hoops team-mates, but the impressive netminder, who cost a bargain £1million from the London club at the start of August, said: “There is no getting away from the fact that his English isn’t perfect and he’s from the other side of the world, but he’s such a team player.

“He’s an honest, humble, hard-working individual and a good human being. Kyogo feels our support as a squad.

“Okay, maybe we can’t sit there and have conversations with him, but he feels the love from us and he gives it back with his performances.

“Kyogo is a top player. He only really got two chances in the Final and he killed Hibs. It was top centre-forward play and it’s what we needed. 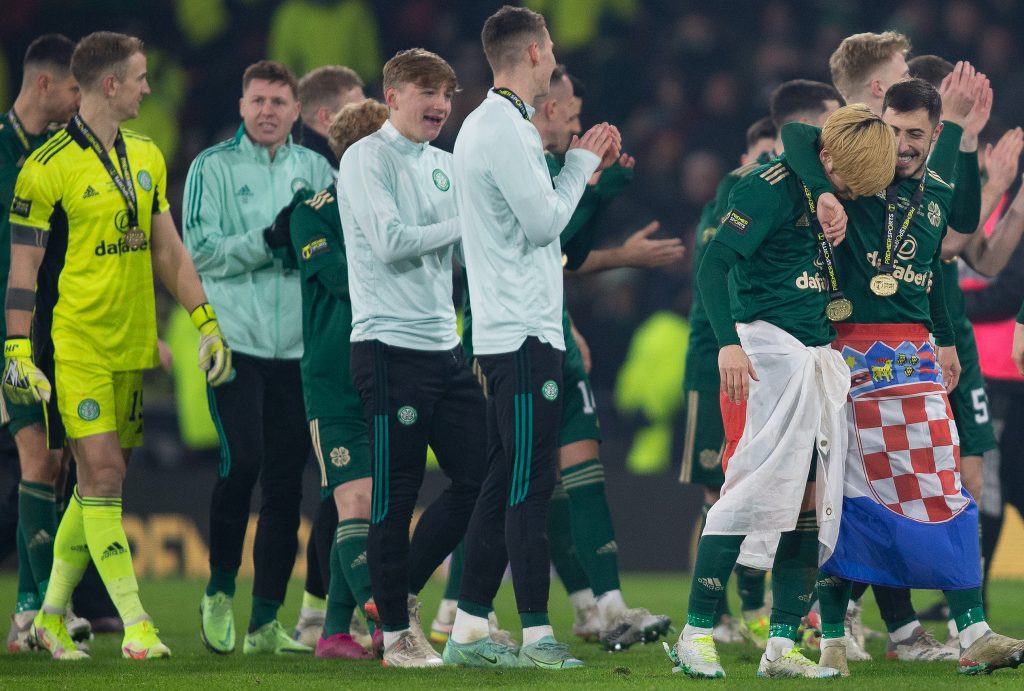 “Callum McGregor and Tom Rogic showed great vision to find him and he did the rest.

“We believe in the squad, of course we do. But when someone like Kyogo is available to play, he suits the style so well.

“There is no getting away from the fact he’s our No.1 striker and if he’s available we are very happy.”

Kyogo was struggling to overcome the hamstring problem that kept him out of the Premiership outings against Motherwell and Ross County, but he returned in magnificent matchwinning fashion against the Edinburgh club.

Hart, speaking to the Daily Record, continued: “Nothing could have kept him out of that game and that’s testament to him.

“He has come back from an injury that could have potentially put him out for a couple of weeks and put himself on the line.

“It was strange. For all the dominance we had, we didn’t particularly penetrate Hibs and then they scored.

“All hell breaks loose, but then the little man takes the chance when he gets it. He’s a top player and he won us the game.”

The much-decorated last line of defence made two crucial saves in the second-half from Kevin Nisbet and Joe Newell to make certain the Hoops kicked off the Postecoglou era with silverware after last season’s barren campaign. 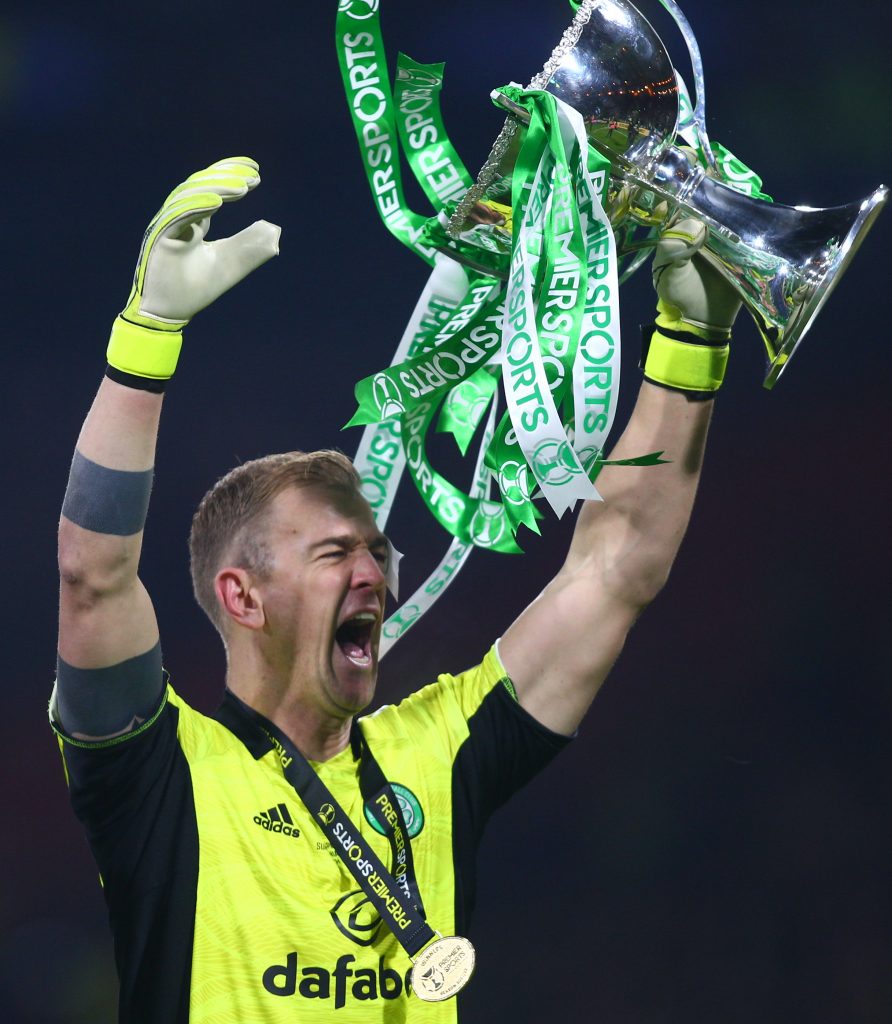 CUP THAT CHEERS…Joe Hart holds aloft the newly-won silverware to the acclaim of the joyous Celtic support at a rocking national stadium.

Hart added: “That’s my job. We are going to be dominant in games, but the other teams are very resolute. They make it hard for you.

“Teams hang in games, so, ultimately, I will have a couple of actions to do and they could be important in the game. I have to be ready for that in every match.

“Teams will get chances and especially in a Cup Final. If it’s close then it’s always going to be carnage towards the end.

“No matter how dominant we were, they had nothing to lose. They had big strong lads up front. Six attackers and two centre halves in the box at the end, but it was all good fun and we won in the end.

”It’s a good feeling to have this medal. Hard work paid off.

“It was a tough game in the end and a real strange one. Hibs obviously had a gameplan to stay in it as long as possible – and they got their goal.

“But that opened the game up and probably suited us, to be honest. Resilience is the most important thing to have.

“We play good football, but there is also a realisation that when the results are on the line, we need to step up. The manager constantly talks about that. 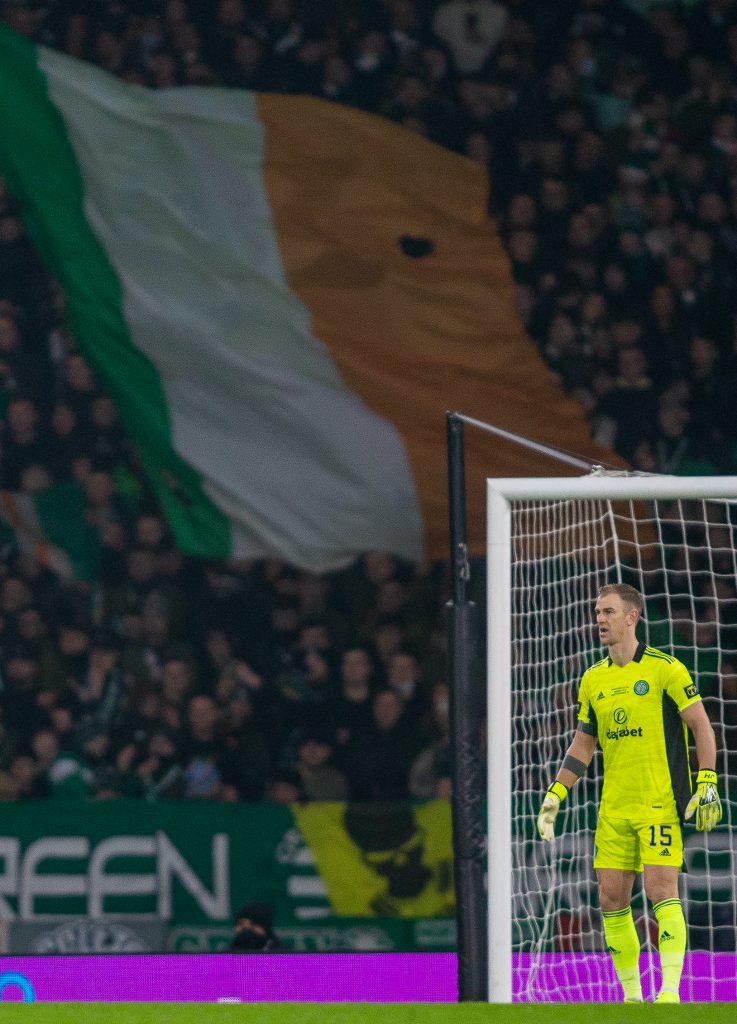 WE’LL SUPPORT YOU EVERMORE…Joe Hart gets the backing of the Celtic fans at Hampden.

“You have to show personality in our football, but during games, there will also be tests that we can’t necessarily plan for.

“A good team steps up in those moments and we have done that.

“This is huge because you live in the moment, don’t you?

“This was my first chance to win a trophy for this great club and I had my family here.

“It was special, really special. I am very proud. I enjoyed the celebrations with the fans at the end.

“During the game you need to show composure and stay calm. But I am one of them, I love football. I love playing, always have and always will.

“Growing up, I never thought I’d have the opportunities to do the things I am doing.

“It would be criminal of me to be on this pitch and not enjoy it with the fans, when so many thousands would love to be there, too.” 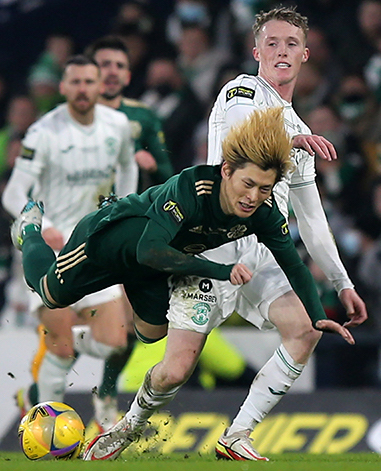 HAPPY LANDINGS…Kyogo Furuhashi heads for a fall after a challenge.

Hart and his team-mates go into action again tomorrow night against St Mirren in Paisley before travelling to Perth to face St Johnstone on Boxing Day.

They squeeze in another league game against the Easter Road side a week tonight and then they switch their focus to the visit of Giovanni van Bronckhorst and his Ibrox team on January 2.

Hart hardly had a look-in as back-up to Hugo Loris at Spurs last season, but the game match against Jim Goodwin’s men will be his 30th since making his debut in the 4-2 win over FK Jablonec on August 5.

Hart wouldn’t want it any other way.