Celtic Quick News on News Now
You are at:Home»Latest News»HOOPER GETS HIS WISH
By CQN Magazine on 22nd January 2016 Latest News

GARY HOOPER today signed for Sheffield Wednesday on a 3-and-a-half-year deal for an undisclosed fee, believed to be around £3.5m.

The former Celtic striker left Parkhead for Norwich City in a £5M deal in 2013 having scored  63 goals in 95 appearances for the Scottish champions. Hooper joined Celtic from Scunthorpe in 2010 for a fee of £2.4m, thus netting Celtic a significant transfer profit.

Things never worked out for Hooper at Carrow Road and the player has been on loan at Hillsborough this season, scoring 6 goals in 13 appearances for the Yorkshire club. 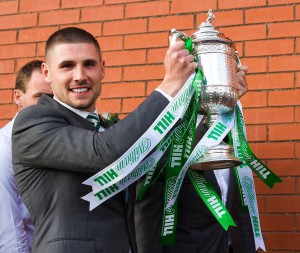 Earlier this week we reported that Hooper was determined to have his future resolved this week, and it looks like he now has his wish.
Hooper, who scored both Sheffield Wednesday’s goals in the 2-0 win over Leeds United at the weekend admitted: “I like it here and I want to stay.
“It’s a good squad, we’re winning, I’m scoring goals and I’m playing games.
“I am happy and now we’ve just got to see what happens.”
Sheffield Wednesday have now, as a result of securing Hooper’s signature, dropped their interest in Scottish international duo Jordan Rhodes, of Blackburn Rovers, and Fulham’s Ross McCormack.
Norwich this week signed Steven Naismith who in June 2012 refused to join the club he called Sevco when Rangers went out of business. As a free agent he signed for Everton, where he established himself in England’s top division, before completing this week’s move to Norwich. Everton received a fee of £8.5m, with not a single penny being due to the successor club playing out of Ibrox.
Gary Hooper scored the last ever Old Firm goal for Celtic against Rangers in a 3-0 in April 2012 before the Ibrox club went bust.
Hooper was often mentioned for a possible return to Paradise but his huge wages at Norwich always looked like being a stumbling block.
Anyway, Celtic ‘s interest in a striker playing in England is focused more on the one who got away rather than one who went away.
Steven Fletcher may well get his chance to play in the Hoops either in the next week or so or more probably in the summer.