Undoubtedly, that will lead to further speculation about the 21-year-old striker figuring on the wanted list of many of the game’s cash-rich clubs in the January transfer window.

However, the Celtic manager insisted yet again his player is not anxious to quit the eight-in-a-row champions, despite the conjecture that has gone into overdrive since his nine goals in four games for the France Under-21 side.

Ahead of the Europa League Group B encounter against the Serie A outfit, Lennon was asked by an Italian journalist if Edouard was “hopeful” of a move to one of Europe’s top five leagues.

Lennon, speaking to the media, answered: “Hopefully not!

“Look, there is going to be constant speculation regarding Odsonne if he continues in the form that he is, we cannot stop the speculation. 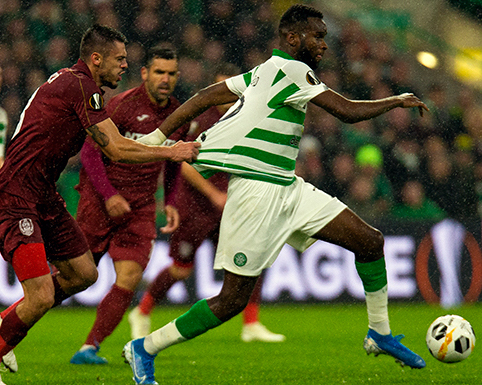 GETTING TO GRIPS…a Cluj defender finds a novel way of stopping Odsonne Edouard.

“But we cannot stop the progress, obviously, there will be a lot of interest from a lot of the big teams and that will be a decision the club will have to make alongside his representatives.

“He’s in fantastic form for us. He’s happy, he’s been patient, he’s improving his game all the time.

“I hope he goes and shows all his great attributes against Lazio.”

Edouard will be pivot again to the Hoops’ hopes of progressing to the last-32 of the tournament when the action gets underway at a packed Parkhead.

He eased the pressure in the previous outing with a crisp header early in the confrontation with Champions League conquerors Cluj at the start of the month.

Mohamed Elyounoussi, with his first strike for the club, made certain of a triumph and three points with a second goal in the second-half.

Lennon saw his side pick up their first point in the section when Ryan Christie swept in an immaculate penalty-kick in the 1-1 draw with Rennes in France.

Celtic are top of the section, one point better off than their rivals and they are focused on stretching that to four before the return in Rome in a fortnight’s time.