CELTIC boss Brendan Rodgers is seeking confirmation from Leicester City that Filip Benkovic will be allowed to see out his season-long loan deal at the champions.

The Midlands club’s manager Claude Paul has stated he would be satisfied for the Croatian Under-21 international centre-half to remain at Parkhead, as CQN reported at the weekend.

There is a recall clause in Benkovic’s contract that would allow the Premier League outfit to scrap the temporary transfer during the January window and bring the classy back-four operator back to the Foxes..

With Dedryck Boyata, who will be out of contract in June, free to discuss terms with other clubs after the turn of the year, the Hoops are aware they could lose both of their main central defenders with five months of a crucial season remaining.

Asked about the possibility of Benkovic staying at the club as they bid for eight successive titles, Rodgers replied: “We haven’t had confirmation, but it would be great for Leicester, for Filip and for us. 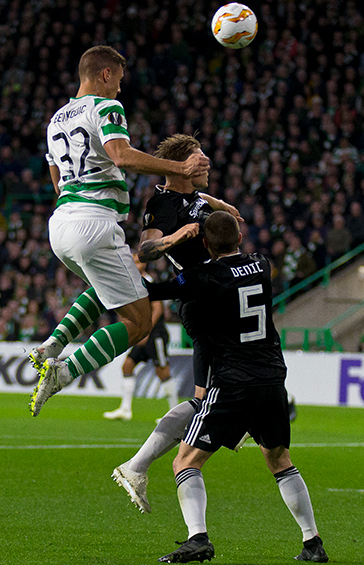 UP AND AT ‘EM…Filip Benkovic displays the form that has won over Brendan Rodgers – and the Celtic fans.

“I think he’s shown that, at 21, he’s a big talent and the whole idea of him coming here was to experience what it’s like at a huge club – playing, being developed and then arriving back at Leicester ready to play in the Premier League.

“Every challenge he’s had since he came up here, whether it was the Leipzig game or any other, he’s been first class in dealing with it. He’s a fantastic young player and it would be great to have him for the rest of the campaign.

“We have good relations with Leicester, but it’s been a very delicate time for them, so I haven’t been pushing anything with them.

“We haven’t been in contact with them since the unfortunate accident; we’ve taken a step back from it and we’ll address it at the right time.”

Benkvovic, who cost Leicester £13million when they signed him from Dinamo Zagreb in the summer, has become a massive hit with the Hoops supporters.

He scored his first Celtic goal with a flashing header in the 5-0 mauling of Hearts at Parkhead last month.