CELTIC are determined to qualify for the Europa League knock-out stages in style.

After Scott Sinclair’s first-half header gave the Hoops a 1-0 victory over Rosenborg last night, the Hoops only require a draw against RB Salzburg at Parkhead to achieve their target.

However, Brendan Rodgers is planning on another east end extravaganza against the unbeaten Austrians who have already qualified after their 1-0 triumph over Red Bull stable-mates Leipzig.

The champions, who are now preparing for the Betfred League Cup Final against Aberdeen at Hampden on Sunday, have no intention of playing for a draw in just under a fortnight’s time.

Rodgers is keen to use home advantage to finish a “great learning campaign” on a high when Salzburg visit.

The ground was rocking earlier this month as goals from Kieran Tierney and Odsonne Edouard gave the side a memorable 2-1 victory over the big-spending Bundesliga outfit. The Irishman is hoping to stage an action replay.

He said: “Like always, we will go in to win the game; it is very hard to just play for a point and a draw. 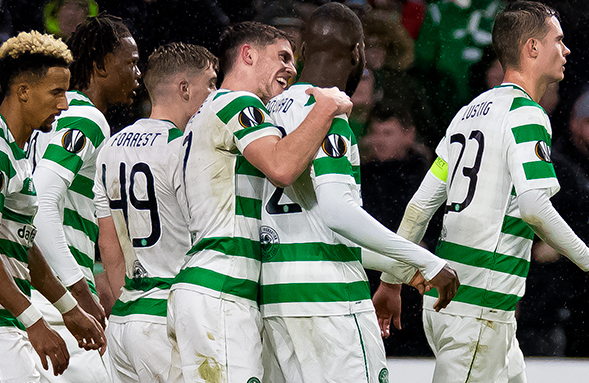 “We will be playing against a good side, but we want to win the game and use the whole Celtic Park experience and atmosphere to push us over the line.

“It will be a fantastic demonstration of the Celtic support and what that synergy between them and the team is all about.”

Rodgers admitted he was “very pleased” with the way his players responded to the must-win situation in Trondheim last night.

Sinclair’s goal secured a sixth win – plus a draw – from the team’s last seven outings to maintain their momentum as they head into a crowded December fixture list.

The Irishman added: “To play to that level technically was a good insight for me, to see the calmness and confidence and how they all connected with the pressing.

“Even in the last couple of years, and going into that first League Cup Final against Aberdeen, I would say this is the best level of performance, probably because we have been together a bit longer and the players have gained confidence from winning trophies. ”

Rodgers saw his team overcome the Dons twice in Cup Final showdowns in his first season, winning 3-0 in the Betfred confrontation and 2-1 in the Scottish Cup Final.

Success at the national stadium at the weekend will bring the Hoops gaffer his seventh piece of silverware since he arrived at Parkhead in May 2016. 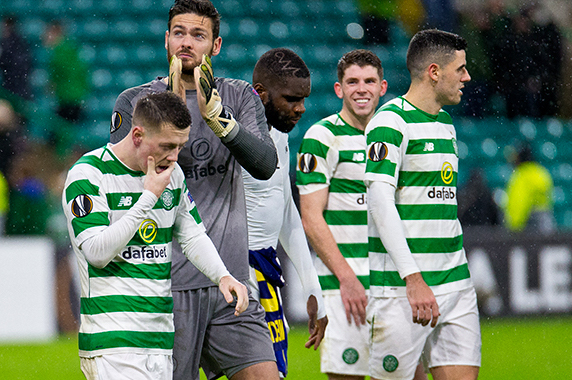 CHEERS…Craig Gordon leads the applause as the Celtic players leave the field after the 2-1 triumph over the Bundesliga giants.