Lennon is now preparing his players for the visit of Steven Gerrard’s Ibrox side for Sunday’s High Noon shoot-out at Parkhead in an encounter where the champions can virtually seal their eighth successive crown.

The Hoops go into the match with a 10-point advantage with eight games still to play.

And Lennon’s ex-colleagues reckon a triumph at the weekend will push his credentials for a full-time contract.

HARTSON, speaking to the Daily Record, said: “I wouldn’t say there’s pressure on him. He’d obviously love to win and get the league done and dusted.

“A win on Sunday would go a long way to getting the league done early going into the split.

“It would be great if Celtic could make it eight in a row with three or four games to spare. 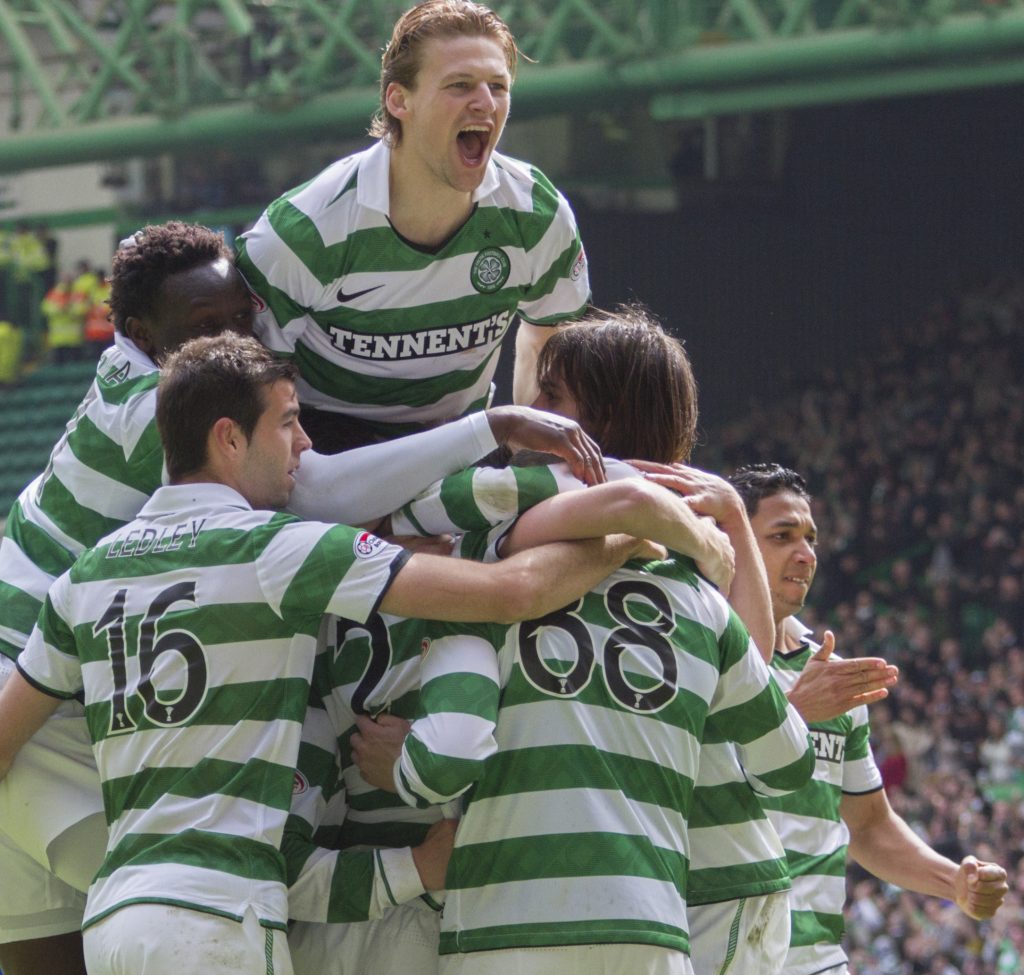 JOY BHOYS…it was seven years ago and the Celtic players celebrate Gary Hooper’s strike for the third goal against Ally McCoist’s Ibrox side. Glenn Loovens comes out on top of the happy Hoops throng on this occasion.

“If Neil wins on Sunday and then in the other two games before the split, he might only need to win the first one after it for Celtic to be champions.

“Neil will want the league and Scottish Cup. He’ll want to bring that treble back having been the man Celtic turned to after Brendan Rodgers walked away. He’ll want to make it as difficult as he can for the Celtic board not to give him the job.”

HARTLEY, speaking to Sky Sports News, added: “Neil knows the club. He’s been there as a player, as a coach and as a manager.

“I think if Neil wins the league and the Scottish Cup then he’s done his chances no harm whatsoever, but that will be up to the people above.

“All Neil can do is win as many games as he can. If he wins the league and the Cup, then he’s done a terrific job.”

Lennon is looking forward to his first game against the Govan outfit as a Celtic boss in seven years.

A repeat of the scoreline in April 2012 will undoubtedly put a smile on his face and push his claims to get the job.

The Hoops romped to a 3-0 triumph with goals from Charlie Mulgrew, Kris Commons and Gary Hooper and it was all over as a contest when the Englishman sent a thunderbolt hurtling high over the shoulder of Allan McGregor for No.3 in the 54th minute.