Celtic Quick News on News Now
You are at:Home»Latest News»HOOPS GET DEMAND FOR 100 PER CENT HOME RECORD
By CQN Magazine on 28th November 2019 Latest News

The Hoops boss is determined his team, who have already qualified for the knock-out stages of the competition next year, end on a high before they bring down the curtain on the section with a trip to Romania to take on Champions League conquerors Cluj on December 12.

Lennon, speaking to the Evening Times, said: “You try and add pressure to it. Try and win the game first of all and keep your momentum going. Because if you lose the game, it can affect you a little bit psychologically.

“I’d like to finish the group with a 100 per cent home record. So, we will try and reinforce that to the players before kick-off.

“Our home form is important, whether it be domestically or in Europe. I don’t think there will be any coming off it from the players. We will definitely try to instil the edge in them and play at the tempo we want to play at. I will try and put out the strongest team possible.

“Slowly and surely, there are steps in the right direction. You could see what it meant to everyone with the win in Rome. The fans and the players got a real taste for it. We want to create more of that as we go along. 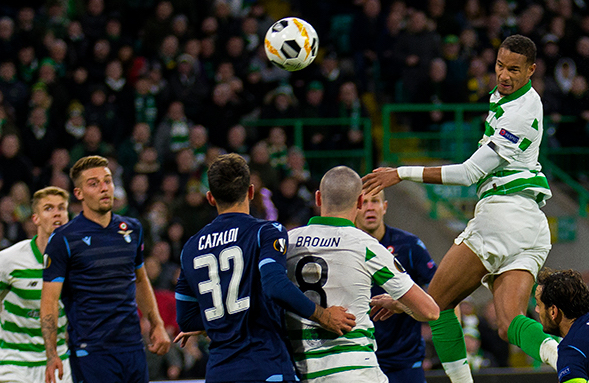 RISE AND SHINE…Christopher Jullien heads in the last-gasp winner against Lazio.

Tonight’s French opponents are already out of the reckoning for a place in the last 32 as they languish at the bottom of the section with a solitary point, ironically won against the Hoops in the 1-1 draw at the kick-off to the section.

Lennon admitted he was unsure how seriously his opposite number Julien Stephan will go into the fixture.

He added: “The danger with Rennes is how they approach the game. Do they come with a freedom? He (Stephan) changes his team a lot and has done so over the last five or six games. What they have got is good pace in their team, they are very good on the counter-attack. We have to prepare for that.

”We were really wary of them going into the first game. They had beaten PSG and had a couple of good results. They came off it a bit and have been a bit inconsistent, but what their mindset is coming into this game, I just don’t know.

“We’re prepared for them to come and have a go and play with freedom.”

Lennon is likely to hand only a second start to Greg Taylor, the champions’ £2.25million buy from Kilmarnock on deadline day.

The 22-year-old Scotland left-back, whose only other appearance in the original line-up was in the 2-0 win over St Mirren earlier this month, is standing by to slot in at the No.3 position in place of the injured pair Boli Bolingoli and Jonny Hayes.

Mikey Johnston, out since the 2-0 win at Ibrox at the start of September, is also available.