DANIEL STENDEL has threatened to the turn the formbook upside down when he takes his Hearts team to face champions Celtic at Parkhead tomorrow night.

It’s a top-v-bottom confrontation and the German coach, who took over from axed Craig Levein earlier in the season, has promised to ATTACK Neil Lennon’s men as he chases three points that could derail the Hoops’ quest for nine in a row.

It has been almost 13 years since the Tynecastle outfit last left the east end of Glasgow with a league triumph, but that will not alter Stendel’s thinking as he attempts to restore confidence in a set of players who lost 3-2 at home to Kimarnock in their previous Premiership outing.

The Edinburgh side’s gaffer, speaking to the Daily Record, said: “When you hope Celtic don’t score, then you can be hoping for a long, long time.

“It’s difficult when you are only defending and hoping you get one or two chances. Every team would like to win, but at first a lot of times teams just don’t want to lose – but we want to try to win.

“Look at the expectations. You follow the scores on a Saturday and look for the Celtic game: 0-0, 1-0 Celtic, 2-0 Celtic…in the end, it is always a Celtic win because every team expects to have no chance. We do expect to have a chance and we want to play our style against Celtic.

“Sometimes it is different when we play other teams like St Johnstone or Kilmarnock, they used some bad situations in our concentration. But against Celtic, we know we cannot take one step back or we will have no hope, so I think that will be good for the focus of my players.

CAPITAL GAINS…Ryan Christie sweeps in the opener against Hearts at Tynecastle in December.

“This is a chance for us. Expectations are normally not so high and in our situation we must use every game to get points. The chance is not as high as in other fixtures, but the game starts 0-0 and I want us to go for three points.”

Hearts, who beat Falkirk 1-0 in their Scottish Cup-tie on Friday night where their opponents struck the woodwork THREE times, are preparing to put the shackles on 24-goal hit man Odsonne Edouard.

“Everyone on the pitch needs to have the feeling that they are not alone. When it’s one against one then maybe we are not the better team, but if we can make it every time 11 v 1 I think we are better.” 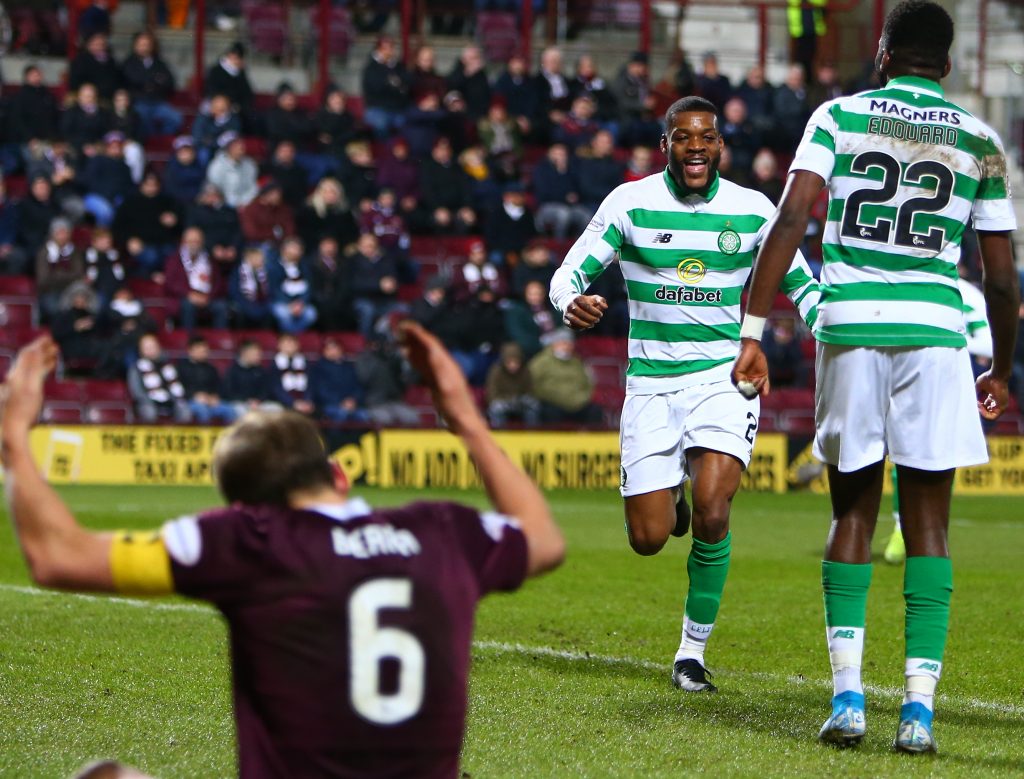 DELIGHT AND DESPAIR…Olivier Ntcham celebrates his goal with Odsonne Edouard as ex-Hearts skipper Christopher Berra sits it out.

It was Stendel’s second match in charge after arriving at the troubled club following his sacking from Barnsley in October. Earlier in the campaign, the Hoops won 3-1.

He added: “The first game against Celtic, we did a lot of things that we wanted to do, but the difference – especially compared to the Rangers game – was conceding an early goal and then a second. We lost our confidence after that.

“What we need to do against teams like Rangers and Celtic is concentrate at every moment. If we believe we can win, then we have a chance.

“We need some special days. However, when we are concentrated and have the courage to do what we want, then we have a real chance.

“If not, then you just go to Glasgow, look at the stadium and go home with nothing – that can not be our mentality.

“We know we are playing against the best team in Scotland, with a very good offense, but we have shown before that we can win against Rangers, so why not Celtic?”