CELTIC are sweating over Moussa Dembele as Brendan Rodgers prepares for tomorrow night’s Champions League qualifier against Rosenborg at Parkhead.

The French striker is battling against the tight hamstring which forced him to come off after the hour mark in last week’s 3-0 win over Alashkert where he scored two first-half goals.

The 6-0 first round aggregate triumph over the Armenians set up the second crunch encounter against the Norwegians over the next fortnight.

Rodgers replaced Dembele with Ryan Christie as a precaution, but, worryingly, the 22-year-old frontman is still struggling for total match fitness.

The player was hampered by hamstring injuries last season and, although this latest setback could mean he will be sidelined against Rosenborg, it is NOT expected to be a long-term problem.

Skipper Scott Brown hopes Dembele wins his fitness battle and can team up alongside his countryman Odsonne Edouard against the opposition who made things tricky last term when it took a wonder goal from James Forrest to settle the outcome. 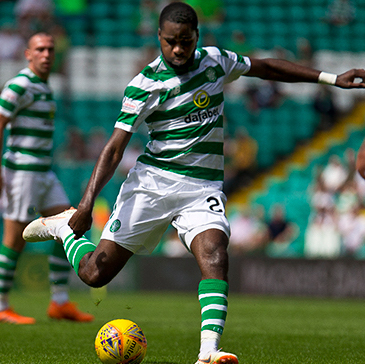 He said: “We were sluggish at home last time against them and got a good result away from home.

“Not many expected us to go there and win, so the home leg is important and it’s great that the pitch is so good. It was cutting up a lot last year and the ball is zipping across it a lot quicker than it did last season which helps us.

“Moussa and Odsonne are frightening together up front and they seem to have developed a really good partnership.

“That’s going to help us in the long run.

“Hopefully, they can play with us for a long time and having them running up front helps me as well.

“Odsonne wanted to come back because he enjoyed the team, the fans and the club.

“He loved playing in front of a full stadium, as well, and he now calls this home. The two of them are strong and fierce and they both know the route to goal. That’s a great asset to have.

“We have Leigh Griffiths to come back in and that means we have three strikers who are all good goalscorers, but who are also willing to do the dirty work.

“Tom Rogic has been playing catch-up after being at the World Cup. He has been a miss for us in pre-season, but he’s back and looking good in training. It will be up to the manager when he makes his return.”