STEPHEN WELSH has admitted to Covid panic at Celtic after Christopher Jullien tested positive for the virus.

The youngster was drafted into a new-look central defensive pairing alongside Shane Duffy in the 1-1 draw with Hibs at Parkhead on Monday.

Thirteen team-mates were ordered to self-isolate for 10 days after the French ace proved positive for coronavirus upon his return with the squad from Dubai on Friday. Neil Lennon and John Kennedy were missing from the dug-out against the Edinburgh club and will be watching the action from home when the champions face Livingston in Glasgow on Saturday.

Gavin Strachan, son of former Hoops gaffer Gordon, will be in charge again against the West Lothian outfit as the Hoops try to claw back some crucial points in their desperate bid for a historic tenth successive title.

No-one is throwing in the towel although the champions are 21 points adrift with three games in hand.

Welsh is preparing to play his part in the almighty quest, but, speaking to the Daily Record, admitted: “Everything was normal on Sunday, but then we found out about the positive case and everything happened really quickly.

“Once you find out you’re playing, nothing else really matters.

“Probably for everyone there was a bit of panic because anyone can get it these days.

“So, you’re just hoping you don’t get the phone call that tells you that you’re a positive.

“I was happy I wasn’t one of the guys involved so I could go and play. You never think it’s going to be you. So, when it happens it is a bit of a shock.

“When the team comes together you need to get on with it. I thought we did that pretty well.” 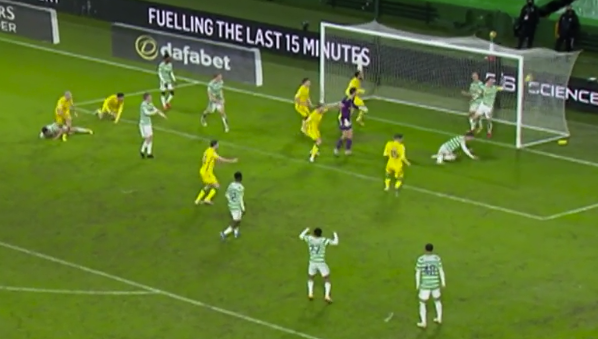 STOPPAGE-TIME WOE…the Celtic defence is in disarray as Kevin Nisbet equalises for Hibs.

The patched-up Celts were forced to hand a debut to 19-year-old Californian Cameron Harper as FOUR strikers were ruled out – with Odsonne Edouard, Leigh Griffiths, Albian Ajeti and Patryk Klimala all ordered to quarantine.

Likewise, Kristoffer Ajer and Hatem Abd Elhamed had to step down and, as luck would have it, Nir Bitton was banned after his red card at Ibrox on January 2.

Duffy and Welsh tried valiantly to push the Hoops to a much-needed win and the 20-year-old, who is more at home at right-back, said: “The boys who were out are the big players for the team. The side was thrown together within 24 to 48 hours, so I think the spirit was really good.

“I thought we were really good, but it’s always disappointing not winning, especially when you are 1-0 up.

“We scored a late goal, an unbelievable free-kick from David Turnbull. But we couldn’t hang on at the end.

“I think it was probably the experience of the younger boys coming on, me included, of trying to see out games and trying to win games.

“That’s what the club’s all about, winning games.”

“We shouldn’t really look at anyone else. All we can do now is win as many games in a row.

“The pressure’s always on here to get wins. Every single game you have to win and if you don’t win you get criticised, fair enough.”