The silverware surge – including the phenomenal quadruple treble of TWELVE successive domestic honours – came to a shuddering halt in the most unexpected circumstances.

A season that had promised so much the previous summer came off the rails in bewildering fashion as the Hoops flopped in their bid for a historic tenth consecutive championship while relinquishing their grip on the Scottish Cup and the League Cup. 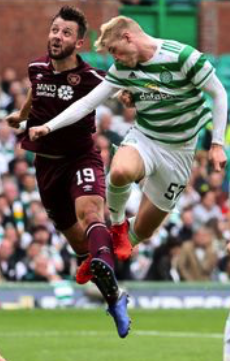 HEAD BHOY…Stephen Welsh leaps to outjump defender Craig Halkett to thump in a header in the 3-2 Premier Sports League Cup win over Hearts at Parkhead in August.

Welsh was in and out of the side as Neil Lennon was unable to piece together a central defence with the likes of the unfortunate Christopher Jullien, Shane Duffy, Kristoffer Ajer, Nir Bitton and Hatem Abd Elhamed as well as the Scotland Under-21 starlet vying for places.

The Parkhead club have undergone a change of seismic proportions since a spectacular fall from grace that has seen the manager replaced with Ange Postecoglou – after John Kennedy’s 10 games in charge in the miserable run-in – while a dozen recruits have arrived with big names such as skipper Scott Brown, Odsonne Edouard, Ryan Christie and Ajer leaving during a hectic summer of upheaval.

Welsh, who has shrugged off injury fears after limping off in the Scots’ youngsters’ 2-0 loss to Belgium on Tuesday, insists the Hoops will get back on course for trophy glory when they face holders St Johnstone in the Premier Sports League Cup semi-final at Hampden on Saturday evening.

The versatile defender, who made his debut for the team as a right-back in a 4-1 win over Hamilton Accies at New Douglas Park in February last year, believes Postecoglou’s men can dethrone the Perth side who claimed a deserved trophy double at the national stadium last time around.

Welsh said: “St Johnstone were excellent in the Cups last year – in fact, they were unstoppable.

OFF TARGET…Stephen Welsh glances wide of the Dundee post in the 4-2 victory at Dens Park before the international break.

“So, we know how tough a game it will be and how tough St Johnstone are to beat in the Cup.

“They are a good side with really good players who are also really well disciplined.

“But we’ve got some creative players in our team, too, as you have been seeing for the last few weeks. So, we are going into this with confidence.”

Welsh, who is ready to again replace the injured Carl Starfelt to take his place alongside Cameron Carter-Vickers, continued: “It’s a Cup semi-final and a chance to get to the Final, so it’s a massive game and I am sure everyone will be ready to go.

“Training will be the usual high intensity and we are looking forward to the game. Hopefully, all our international players will come back and we will prepare properly for it.

“Before the World Cup break, we were on a good run and we want to continue that.”

Welsh, speaking to the Daily Record, added: “Our support are the best. They always come in huge numbers and make a brilliant atmosphere. We are really looking forward to it.

“We need to use that to our advantage and, hopefully, we can send them away to look forward to another Cup Final because that’s the aim.”