FRASER FORSTER has been labelled “a clown” by his Celtic team-mate Mohamed Elyounoussi.

The players agreed season-long loans from Southampton in August and both played their part in the 6-0 rout over Ross County at Parkhead yesterday.

The skyscraper keeper repelled the rare raids from the Dingwall outfit while the Norwegian international attacker started and ended the misery with goals from Odsoone Edouard (2), Callum McGrgeor and James Forrest in between.

Elyounoussi is a massive admirer of Forster and believes he is the best shotstopper at the south coast club, despite his demotion to third in the pecking order behind Angus Gunn and Alex McCarthy.

The Moroccan-born left-sided raider, who opened his goalscoring account at the club with the killer second goal in the 2-0 Europa League victory over Cluj earlier this month, told the Evening Times: “Fraser is a really good guy. 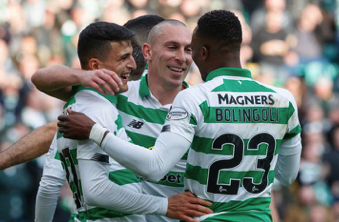 “He also took care of me when I came here to Celtic. We were both staying in the hotel and he drove me to the training ground.

“Obviously, if you go from that situation to playing you will feel better. But he’s still the same guy. He was quite positive at Southampton.

“I would say he was kind of a clown, he talked a lot and made a few jokes. He’s still the same guy here.”

Elyounoussi, who cost the English outfit £16million when he arrived from Basel last summer, added: “Fraser is a quality keeper. I lost count of the number of times we were the last ones after training, me doing shooting and him in goals. I know how good he is.

“I think he was the best one at Southampton. He’s amazing at his best. Hopefully, for his sake, he can get that positive energy back and get back where he was.

“Everyone feels strange if they don’t play. Everyone thinks they’re good enough to play. But in the end, it’s up to the manager and there’s nothing you can do.

“I had it myself last year. I thought I good enough to play, but this is how it is. Football can be tough sometimes. Now both of us are at a good club where we can play, express ourselves and help the team win games.”