THE SPFL’s plans over the date for the final Celtic v Sevco Rangers game of the season could be thrown into chaos.

League chiefs have already pencilled in the first post-split fixture for Brendan Rodgers’ champions to face the Ibrox men at Parkhead on Sunday, April 22.

However, they could be forced to scrap that if Aberdeen drop points against Hearts at Tynecastle on Saturday and the Hoops take maximum points in their last two pre-spllt games – against Dundee in Glasgow tonight and at Hamilton Accies on Sunday.

That would allow Celtic to clinch seven-in-a-row with a win against Graeme Murty’s outfit only a week after the teams have faced each other in the Scottish Cup semi-final at Hampden.

The Dons reduced the gap on the leaders to nine points with a 2-0 victory over Motherwell at Fir Park last night, but Rodgers’ team can restore their 12-point advantage if they beat their Tayside visitors this evening.

And if Derek McInnes’ Reds fail to win against Craig Levein’s side in Edinburgh, then the Hoops could move 14 or 15 points clear of their nearest challengers with a win at relegation-threatened Accies 24 hours later. 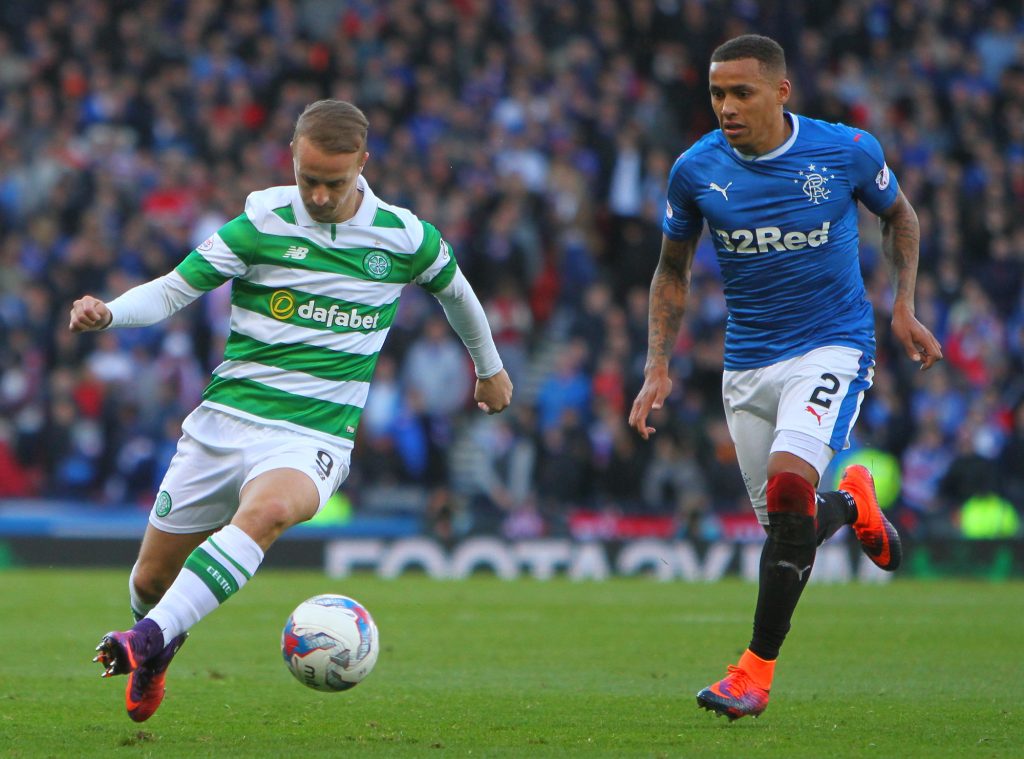 ON THE RUN…Leigh Griffiths races away from James Tavernier.

The Govan side are currently three points behind Aberdeen and even if Murty’s men win at home to Dundee on Saturday, they would be 15 points adrift of their Glasgow neighbours if Rodgers’ side win their next two games.

And with just five games left after the split, that would allow the title-holders to be crowned champions again if they win their first outing after the break which would be against the Govan side.

Police and league chiefs have been desperate to avoid that scenario, but it is beginning to look more likely with every passing game and that could bring disarray to their plans for the Premiership run-in.

Celtic have already won a title against their former ancient rivals with a 2-2 draw at Ibrox in May 1967 when Jimmy Johnstone scored two memorable goals.

The Hoops fans were celebrating again later that month, of course, when the Parkhead side became the first UK club to win the European Cup.