The Amsterdam-born right-back, who joined from Manchester City on transfer deadline day, picked up an early gift with his first winner’s medal in the 1-0 Betfred League Cup success at the weekend.

Frimpong’s startling impact at the eight-in-a-row champions can be measured by the fact the pocket dynamo achieved the feat after only EIGHT first-team games since his arrival on an initial £350,000 deal which will rise to £1million with add-ons.

Neil Lennon introduced the adventurous defender to the Hoops fans in the Betfred League Cup quarter-final against Championship side Partick Thistle at Parkhead in September and the Holland Under-20 international stole the show in a 5-0 victory.

He made his first Premiership appearance in the 6-0 win over Ross County in Glasgow the following month and, once again, emphasised his huge potential.

Frimpong scored his first goal for the club in the 4-0 triumph over Aberdeen at Pittodrie the following weekend and the support realised they had a 5ft 4in gem on their hands.

Lennon had no hesitation in fielding him against Hibs at Hampden in the Betfred semi-final and, once again, the teen ace didn’t let anyone down in the 5-2 win.

Much was made about Frimpong possibly being too inexperienced to deal with £7million Ibrox winger Ryan Kent on Sunday in the heat of a tense Glasgow derby, but he hit the ground running and little was seen of the much-vaunted summer purchase from Liverpool. 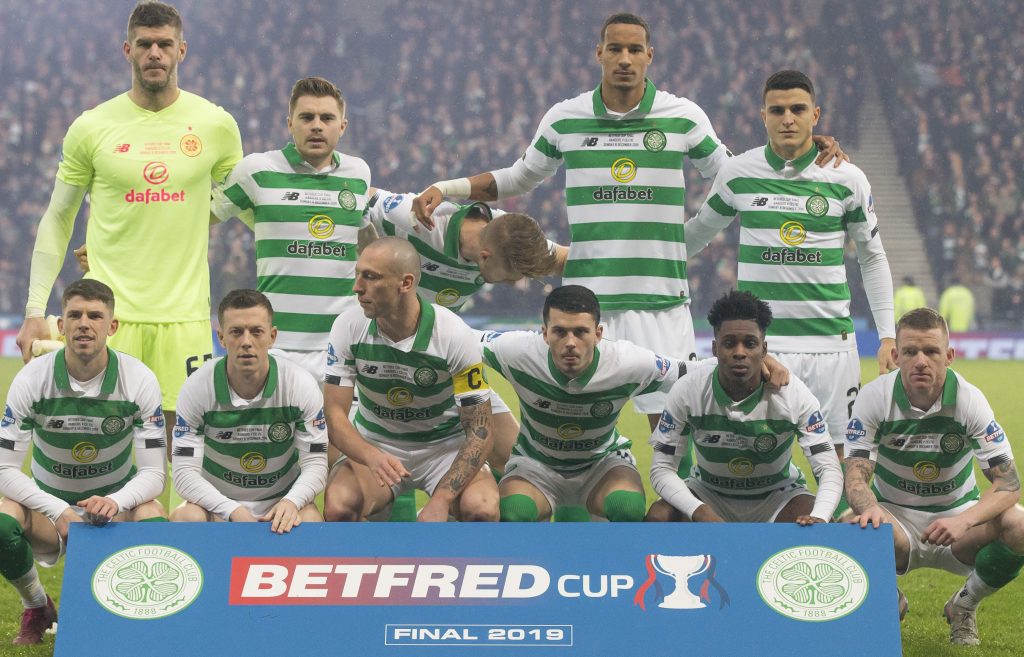 READY FOR ACTION…Jeremie Frimpong (second right, front row) with his Celtic team-mates before the Hampden kick-off. 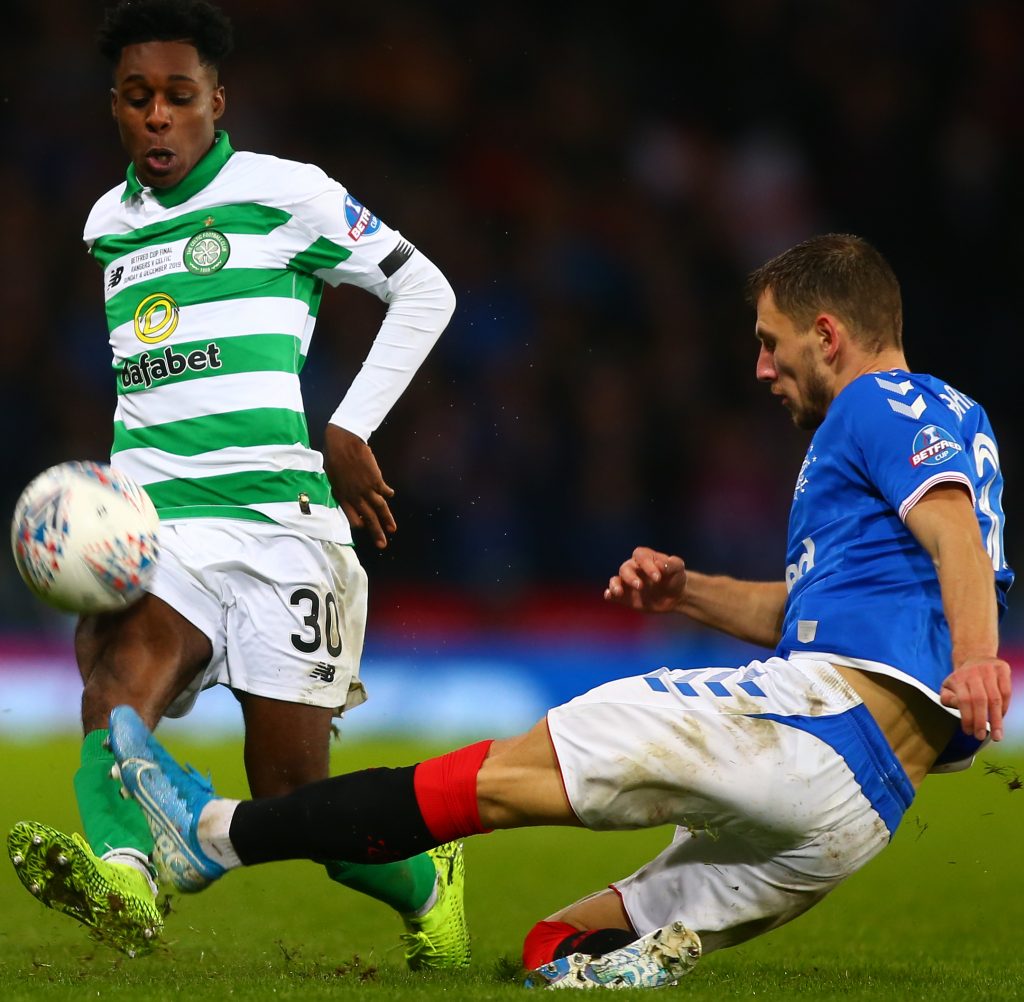 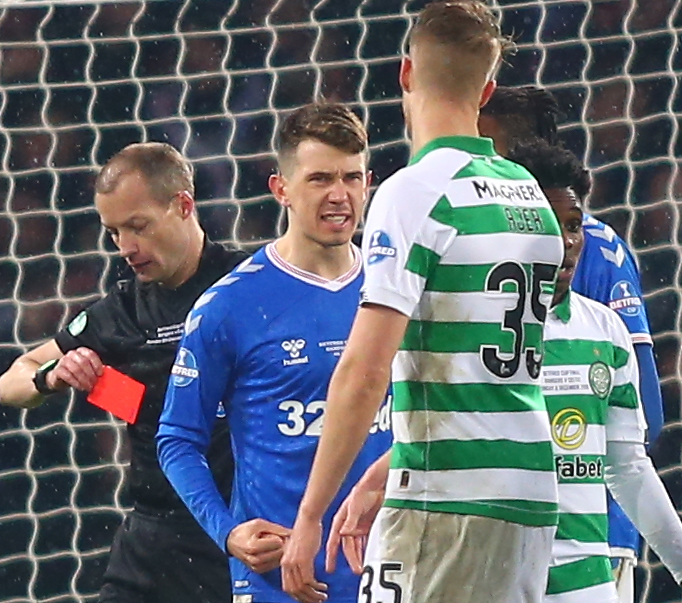 SEEING RED…Frimpong is dismissed by referee Willie Collum and doesn’t appear to be getting any sympathy from Ryan Jack. 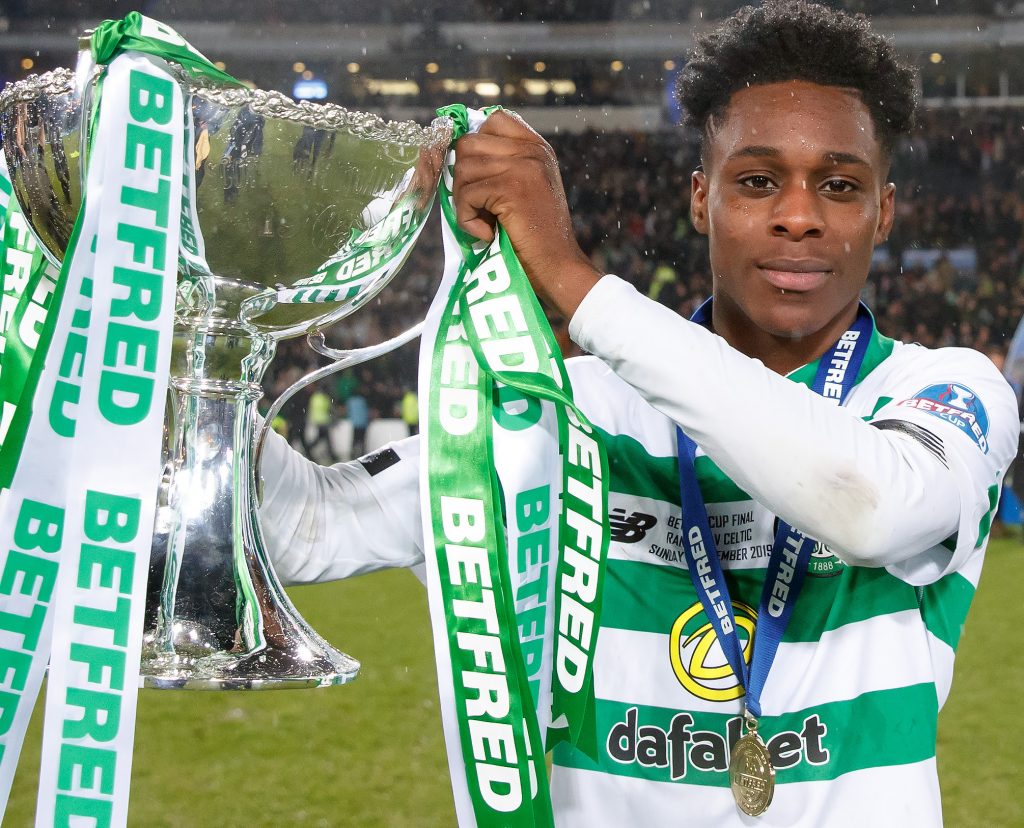 Of course, there have to be bumps on the road and the Hoops kid hit one at the national stadium only three minutes after Christopher Jullien had hammered in the eventual winner on the hour mark.

With refreshing honesty, he later admitted he had instinctively held back Alfredo Morelos after a Jullien clearance had ricocheted off Kristoffer Ajer into the path of the Colombian striker. However, the full-back did not think it was a red card. Referee Willie Collum, however, didn’t agree and immediately banished the Celt.

Fraser Forster made certain nothing was going to spoil his young team-mate’s big day – or anyone connected with Celtic – with a daring swoop to his right to beat the effort to safety.

Frimpong was wide-eyed with delight as he frolicked with the Hoops players at the end of the encounter that had seen them lift their tenth successive domestic trophy in a remarkable sequence of silverware success.

He appeared live on TV to kick off a new catchphrase as he said several times: “Oh my days!”

He then posted a selfie video on his official Instagram account – shown on CQN – and once more beamed: “OH MY DAYS! YESSSSSSSSSS!”

During a BBC interview, he repeated: “Oh my days. When I was sent off like that, I was inside panicking.

“Worst feeling ever. Every time Rangers got the ball I was just panicking. But then it felt like time was going so slow.

“The team held it through and obviously I was buzzing, man, buzzing.”

In Frimpong’s eight outings in the top side, Celtic have won them all, scored THIRTY-ONE goals and conceded only three. He is under contract to Scotland’s title kings until June 2023 at least.

CQN and our thousands of readers would like to wish Jeremie Frimpong Many Happy Returns on the 19th anniversary of his debut on the planet.

On this special occasion, he could change his catchphrase to: “Oh my birthdays!”.